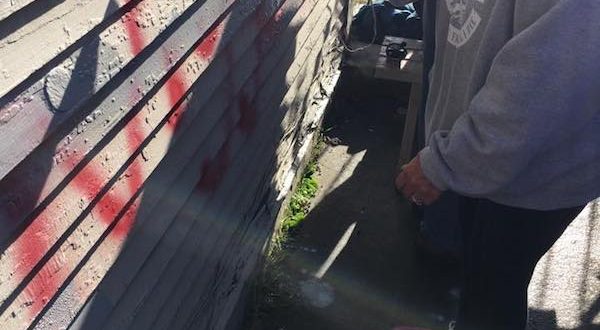 In November, children help paint over graffiti at the MLK Center in Spokane/Contributed photo

Since election anti-Semitic and racist vandalism has plagued region

After “Unite the Right” rallies raged in Charlottesville, Virginia, in August, many U.S. citizens  — including those in the Spokane community — are distraught, angry and fearful.

White Supremacists, white nationalists and neo-Nazis carried rifles, Swastikas and Confederate flags in a city over 2,500 miles from Spokane. But hate and bias incidents are just as much of a reality here.

In early September, an influx of racist fliers including depictions of Sandpoint’s mayor and longtime resident Shelby Rognstand in a gas chamber — fueled by a false rumor that he is Jewish — and other hateful messages alongside racist caricatures littered neighborhoods in Sandpoint, Idaho, according to The Spokesman-Review.

Though Rognstad said he is “not shaken from or scared by the threats,” the community has offered support, comfort and encouragement. The incidences are not representative of the greater Sandpoint community, one that is compassionate and vocal in denouncing hatred, Rognstad said.

“The community has unified and demonstrated its values…of a community that is inclusive and diverse, and unwilling to tolerate that kind of hate and messaging,” he said.

On Sept. 6, the Bonner County Human Rights Task Force held a news conference to address the issue and voice its opposition to hate speech.

A series of sexist and racist robocalls ridiculed Rognstad and instilled fear during his campaign for mayor in October of 2015 but the hate speech has recently become “more offensive and damaging,” Rognstad said. He also believes the uptick in occurrences like these is a “sign of the times.” Insecure persons are responding to instability and significant societal changes, he added.

“It’s to be expected that we would see this kind of reaction. People are inherently fearful of change,” Rognstad said. “They’re inherently fearful of difference, and race and ethnicity and religious difference are all part of that. It’s that people fear and are uncomfortable with difference, and people are fearful of mass change, particularly when it’s changing their cultural traditions and…their economic foundation that has supported their family for generations.”

On Aug. 6, a hate group also targeted World Relief Spokane. Two of its vehicles were papered with racist fliers listing alt-right-affiliated websites, according to the organization’s director Mark Finney.

“The messaging on the fliers was mostly around this idea that there’s a shrinking number of Caucasians in our country, and that Caucasians are going to be displaced or outbred by folks who are not Caucasians,” Finney added.

Finney says this type of hate speech is damaging because it has the ability to “re-traumatize” immigrants or refugees whose lives were threatened in their home countries.

“This [violence] is a very real and painful experience for immigrants. Even hate speech can be very crippling for people,” he said.

Since President Trump’s election, local hate and bias incidents are on the rise. Dr. Hershel Zellman, a retired physician and member of the Spokane County Human Rights Task Force, recalled a rash of divisive incidents in a Spokane during the first week after the election. In response, the Task Force held a press conference on Nov. 22, 2016 to provide elected officials and law enforcement the opportunity to publically denounce hatred and show support for vulnerable communities.

“They saw his [Trump’s] bravado and his calls for violence at his rallies as a call to them, and giving them a pass,” Zellman said.

Zellman is a member of Spokane’s Jewish community and attends Temple Beth Shalom, where a Swastika was painted on a wall in the Temple’s enclosed courtyard in 2014. Despite this incident, Zellman says he has not experienced overt anti-Semitism – apart from distasteful off-handed comments or jokes – during his 38 years in Spokane. In fact, he believes most of the community is curious about Jewish culture rather than fearful of it.

However, anti-Semitic incidents have plagued the Spokane community this year. In March anti-Semitic and white nationalist fliers were posted on the Community Building, Spokane County Democrats building and a Starbucks located at 2703 N. Division St., according to The Spokesman-Review. These fliers included messages that denounced refugees and expressed exhaustion regarding “non-white aggression.” In April the Community Building was spray-painted with anti-Semitic graffiti condoning Hitler’s actions and calling for a race war against Jewish people. All of these incidents occurred after a racial slur was spray-painted onto the Martin Luther King Jr. Center in mid-November.

Rognstad does not support a common refrain in discussions about hate speech and violence: If we collectively ignore hate groups, hate speech and hate crimes, they will disappear due to lack of attention.

“History has shown that we need to unite in opposition and affirm our values as a community,” he added. “In doing so, that’s how we define the culture we live in and drive out that which we do not support.”