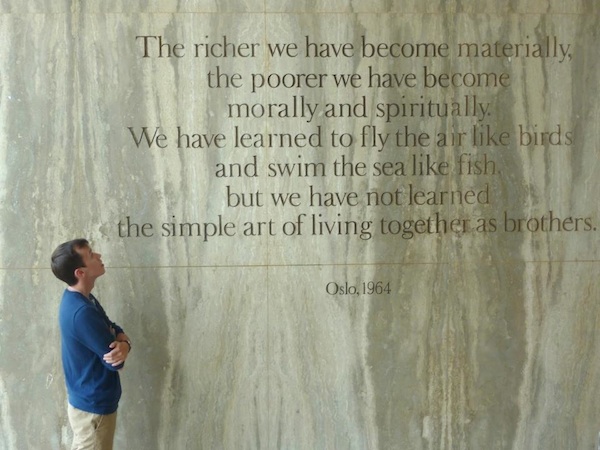 Last month, I was fortunate enough to attend the North American Interfaith Network (NAIN) Connect in Atlanta. The annual connect brings together NAIN members and organizations to discuss interfaith issues and acts as a conference and forum for interfaith and religious leaders across the continent. The theme this year, “Establishing Interfaith Friendly Cities” was very exciting and was highlighted by showcasing the incredible interfaith infrastructure Atlanta has to offer. But some of the most striking things I witnessed in Atlanta weren’t buildings or stately parks. It was the rich heritage of its citizens seeking peace in the midst of hatred. This moved me.

In attendance one evening was Ambassador Andrew Young. He spoke about how you treat others who hate, “Hatred is a sickness. And you don’t get mad at sick people, you heal them, and the way you do that is spiritual healing. Nonviolence and compassion are the cures.”

Another notable moment was when the Rev. C.T. Vivian, a close friend of Martin Luther King, Jr., spoke of a time when he was marching in Selma, Ala., with police dogs being released into the nonviolent crowd, and standing toe-to-toe with the chief of police and known clansmen. He said that the one thing that kept him and the crowd marching in the face of unspeakable hatred was that, “it takes radical love to defeat radical evil.”

These are lessons that have been learned firsthand by the Sikh community in America. In the wake of such incredible heartache and tragedy, Sikhs have unquestionably handled the situation with dignity and resolve. In a time where anger and outrage spill across TV screens, editorial columns, airways and phone lines, it would have been no surprise to hear that the Sikh community was violently outraged about what happened. But they weren’t. They chose love, and community, over vengeance and harm. It seems that because of their unique American experience and commitment to their values of universal love and compassion, Sikhs in America are teaching the rest of us what grace looks like and how to create what MLK Jr. called the “Beloved Community”.

I’ve heard some of my Sikh friends express sadness over this incident and offered prayers for the victims and those involved. But they all, without fail, extend their prayers to the family of the gunman, saying “because it really must be difficult for them as well, and they are also victims here, too.” This isn't just a Sikh tragedy. It is really an American tragedy.

Not just because of the loss of life, but because of the loss of willingness to have an open conversation about the deeper problem. We as Americans need to be talking not just about what occurred, but also about the deeper questions of racism, religious illiteracy and our skewed understanding of what terrorism is. Since Sept. 11, there have been over 300 home-grown terrorist attacks against Americans, many of which target peaceful religious groups like Sikh Americans.

As Steve Coll of the New Yorker recently said, “A pattern of terrorism that is repetitive, rising in ambition, and neglected by the public can signal a coming strategic surprise—this was true of Al Qaeda during the late nineteen-nineties, and it looks to be true of domestic racist terrorism today.”

Why aren’t we talking about this, and why aren’t our leaders taking notice? While both presidential candidates offered their condolences to the victims and victims’s families, neither halted their campaigns like they did last month during the shooting at the theater in Colorado, nor did they speak out about any of these issues regarding gun control, mental health, racism, domestic terrorism, or even the systematic polarization of American society along lines of class, religion and race. If we are going to make terrorism, religious intolerance and racism things of the past, then we as Americans need to be willing to come to the table and have difficult conversations. The beauty of this approach is that it is exactly that has made our country better in the past. It will continue to work if we are willing to pull up a seat.

I don’t have a solution to the violence that seems to be crippling our society, but I do know that coming together in the spirit of mutual respect and understanding is a start. Perhaps we can take a cue from our Sikh brothers and sisters and be more compassionate and willing to have difficult conversations surrounding faith in the public square. We as Americans need to recognize that there is more to be done in our communities. We need to meet our neighbors. We need to grow to understand and appreciate those who are marginalized in our area. And we need to seek positive compassionate solutions to the problems that plague our communities. This approach has served Americans well in the past, whether they were Sikhs attacked in Wisconsin or marching arm-in-arm in Selma trying to heal with a radical love. And we don’t need to go to Atlanta to see this happen.