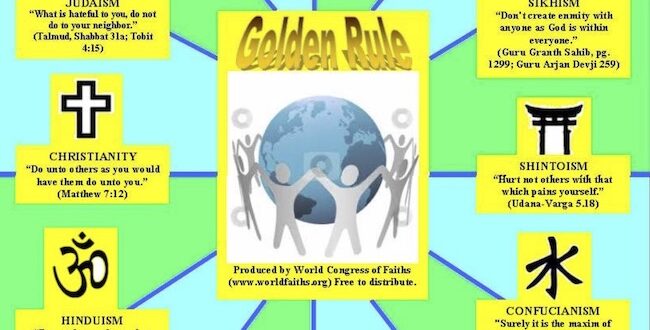 It is a time of great divisiveness. It is nearly impossible to even speak a common language with those whose opinions, especially within the political sphere, diverge from our own. Yet, there is a foundational belief common to humans across history and religion and culture and philosophical systems – the Golden Rule.

Virtually every religious and spiritual tradition has its version of the Golden Rule. These traditions are joined by secular and non-religious belief systems, including but not limited to the ancient Greek philosophers, humanism, atheism and existentialism.

This universally recognized ethic of reciprocity has been formally enshrined in two important and globally respected documents: the 1948 Universal Declaration of Human Rights, and the 1993 Declaration Towards A Global Ethic. The Universal Declaration of Human Rights, which came out of the newly created United Nations, states in Article 1: “All human beings are born free and equal in dignity and rights.  They are endowed with reason and conscience and should act towards one another in a spirit of brotherhood.”

The Declaration Towards A Global Ethic was originally adopted by the Parliament of the World’s Religions, with more than 200 religious representatives present, including the 14th Dalai Lama. In addition to referencing the 1948 Declaration of Human Rights, Principle II states, in part, “What you wish done to yourself, do to others! This should be the irrevocable, unconditional norm for all areas of life, for families and communities, for races, nations, and religions.”

And finally, if none of these examples is convincing, every parent and child throughout the world, from the beginning of time to our own era, has delivered or been on the receiving end of this admonition: “How would you like it if someone did or said that to you?”

Without dismissing differences, big and small, important and perhaps less important, surely we can find common cause with virtually anyone, or maybe even everyone, around the Golden Rule, in whatever form or tradition it speaks to us.

What would it look like, in this season of choices, most particularly as we mark our ballots, if we evaluated our elected officials and their policies through the lens of the Golden Rule? If we chose members of the local public school board, local judges, mayors (who frequently appoint the chief of police), county treasurers, insurance commissioners, state and federal legislators, governors, even a president by determining if the results of their polices and positions indeed “did unto others as we would have done unto us?” Might we broaden our perspective to include what is good for our neighbors – meaning beyond our zip code – and not just what is good for us?

Of course, nothing can be completely neutral in terms of benefit and burden sharing. But I believe we could and should make decisions where the disparity between those benefits and burdens is greatly lessened and the impact more evenly shared among ourselves and our neighbors. How would our tax policies change? Our insurance accessibility? Our housing and zoning laws? Our educational funding and curriculum? Our environmental regulations as they impact both businesses and individuals (including our children, grandchildren and great-grandchildren)?Our public health initiatives? Our international relationships?

The Golden Rule would challenge us — dare us — to envision a world where the zero-sum principle no longer held so much power in our lives. It might help us move forward into a world where “non-zero-sum-ness” was a guiding principle, and not merely an impractical idealistic notion. And in the doing, the good life we all want for ourselves could be shared, even if ever so slightly, with our neighbors. After all, don’t we want our neighbors to do that unto us?

Previous An Evangelical’s Guide To QAnon: Inside One Of The Most Talked About Internet Groups
Next ‘Reluctant cultist’ survives an end times cult turned pet rescue group to find his own faith