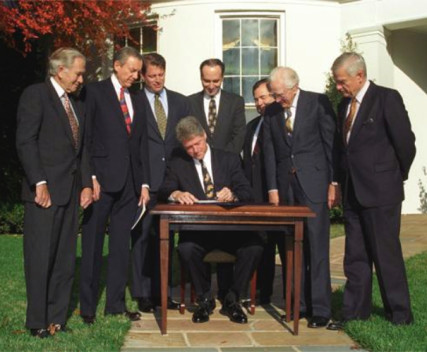 (RNS1-JUNE 24) President Bill Clinton signs the Religious Freedom Restoration Act at the White House's South Lawn on Nov. 16, 1993. For use with RNS-RFRA transmitted June 24, 2014. Public domain photo via the The U.S. National Archives

Should Congress repeal the law behind the Hobby Lobby case?

WASHINGTON (RNS) As soon as the Supreme Court decided for Hobby Lobby and against the Obama administration’s contraception mandate on Monday (June 30), critics called for the repeal of the 1993 law that the justices relied on to make their 5-4 decision.

A Washington Post editorial suggested the next day that the statute – the Religious Freedom Restoration Act — could be narrowed in scope. A hashtag popped up on Twitter: #repealRFRA. The Freedom From Religion Foundation asked its constituents to lobby Congress to scrap the law.

Yet at the same time, 10 prominent religious leaders sent a letter to Congress, imploring lawmakers not to touch the Religious Freedom Restoration Act.

“Do not amend or appeal RFRA, one our nation’s most vital legal protections for the religious freedom and rights of conscience of every person of every faith,” read the letter, whose signatories included the Rev. Matthew Harrison, president of the Lutheran Church-Missouri Synod; Russell Moore, president of the Ethics and Religious Liberty Commission of the Southern Baptist Convention; and Gary E. Stevenson, presiding bishop of The Church of Jesus Christ of Latter-day Saints.

RFRA sits at the heart of the Hobby Lobby case, perhaps the most debated on the Supreme Court’s docket during its just-finished session. The case revolved around the question of whether employers had to cover all types of birth control, including ones that their religious convictions held out as morally objectionable. But it hinged on little-known RFRA.

In the Hobby Lobby decision, the court’s conservative majority ruled that privately held corporations, not just people, have rights under RFRA. And while it assumed the contraception mandate furthered a compelling interest, it ruled that the mandate was not the least restrictive means of getting a full range of birth control to women, and that in the process the mandate trampled on the religious rights of the evangelical Green family that owns Hobby Lobby.

Marci A. Hamilton, a Benjamin N. Cardozo School of Law professor who has been trying to repeal RFRA since Congress passed it nearly unanimously in 1993, said the Hobby Lobby case shows how RFRA invites religious people to use their beliefs to discriminate against others.

“The genie is out of the bottle,” Hamilton said. “RFRA is an extreme standard, and with Hobby Lobby it becomes crystal clear that RFRA yields results that are in opposition to the vast majority of Americans’  views.”

Most Americans, a Kaiser Health Tracking Poll released in April showed, believe that an employer’s religious beliefs should not trump employees’ rights to all types of birth control promised by law.

Many critics of the Hobby Lobby decision say it not only tramples women’s health care rights, but also opens the door to other business owners who want to invoke their religious rights to discriminate by, for example, refusing to hire gay employees.

In the wake of the ruling, Sarah Warbelow, legal director of the Human Rights Campaign, a national gay rights group, said it and allied groups “must remain vigilant in the event business owners attempt to use this decision to justify other forms of discrimination, including against LGBT people.”

Could the movement to repeal RFRA go anywhere? So far, no member of Congress has stood up to advocate repealing or even tinkering with it, though some have said the Supreme Court misinterpreted it.

“I’m not nervous for RFRA,” said the Southern Baptists’ Moore. “I think RFRA is secure in law and that it has the support of the Congress.”

Still, the attacks against RFRA, Moore continued, are unsettling, and reflect a movement on the political left to redefine religious liberty protections as licenses to discriminate.

“We do see religious liberty coming under harsh rhetorical attack in ways I don’t think could be anticipated years ago,” he said. “We’re attempting to be Paul Reveres for religious liberty protection and warning people ahead of time that there are crucial rights that must be protected.”

Might as well, they’re trashing the rest of the constitution.