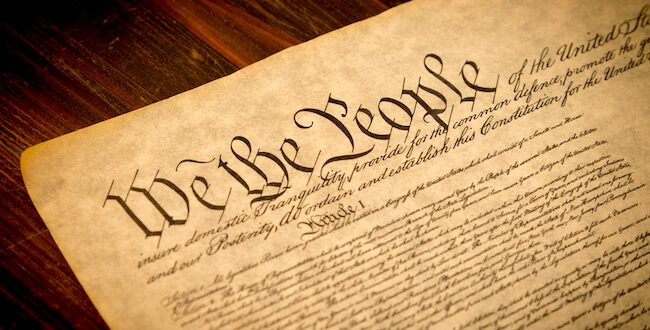 The Constitution of the United States of America/DepositPhoto

Should Christians believe the U.S. Constitution is divinely inspired?

Should Christians believe the U.S. Constitution is divinely inspired?

What do former Vice President Mike Pence, recently defeated Congresswoman Liz Cheney, Speaker of the Arizona House of Representatives Rusty Bowers and retired, three-star General Michael Flynn all have in common? They claim a Christian-type faith and believe that the U.S. Constitution is divinely inspired, an adjective often used for holy writ across the world.

Each has their distinct denomination: Pence a born-again Evangelical Catholic, Cheney a United Methodist, Bowers a member of the Church of Jesus Christ of Latter-day Saints and Flynn a Trumpian Christian who was raised Irish-Catholic.

While these are diverse religious backgrounds, it’s interesting to note that each of them claim the U.S. Constitution is divinely inspired.

It’s also interesting to note that believing the U.S. Constitution is on par with the Holy Bible is the heart of many Christian nationalist events across our nation, including the ReAwaken America Tour that was held in Post Falls on Friday and Saturday.

What they have said about the U.S. Constitution?

But what does that mean? Well, I think we can parse out some of what they mean by what each of them have said.

Pence’s chief legal counsel, Greg Jacob, relayed to the Jan. 6 Committee’s third hearing on June 16 a conversation he had with the former vice president on this topic.

Jacob, quoting Pence, “’I can’t wait to go to Heaven and meet the Framers and tell them, ‘The work that you did in putting together our Constitution is a work of genius. Thank you. It was divinely inspired.’”

Cheney said during the Jan. 6 Committee hearing on June 21 the U.S. Constitution “is indeed a divinely inspired document.”

She said this in agreement with Bowers’ statement in that same hearing, “It is a tenet of my faith that the Constitution is divinely inspired, of my most basic foundational beliefs.”

And Flynn, in a roundabout way, alluded to his belief the Christian Bible and the Constitution are at the very least on the same level of holiness, according to Baptist news publication Word&Way in the July 14 article “The Sermon Michael Flynn Hopes You’ll Hear.”

At a ReAwaken event in Virginia, the article states Flynn said:

“’What [pastors] need to be doing is they need to be talking about the Constitution from the pulpit as much as the Bible. They have to do that,’ he declared to applause while in the sanctuary of Rock Church International in Virginia Beach on July 8. ‘That’s what pastors need to be doing. That’s what a pastor does when they’re leading their flock, and not standing there and pretending like they know a lot of verses in the Bible — which I don’t.’”

Further on in the article, Flynn was quoted adding, “‘You ought to be up there preaching the Constitution as much or more than the Bible.’”

The U.S. Constitution is not divinely inspired

While it can be argued that these four leaders believe similarly in the divine inspiration of the Constitution, the actions that flow from each of these individuals’ beliefs are very different.

Pence, Bowers and Cheney take it to mean that their own actions and the way they uphold the integrity of their offices comes from a heartfelt, almost religious, oath to the Constitution. As such, each have at great cost, spoken out against the “Big Lie” that the 2020 Presidential election was stolen from Trump.

For Flynn what flows from his beliefs is allegiance to what that same Word&Way story quoted above calls “an unholy trinity of Christian Nationalism, MAGA politics, and conspiracy theories (about COVID, elections, vaccines, and more).” As such, Flynn is one of the main promoters of election fraud.

Despite those differences, however, all of them are misguided by their belief that the U.S. Constitution is divinely inspired. For Christians, that adjective is only fitting for the Bible.

The Christian teaching of divine inspiration comes from 2 Timothy 3:16: “All Scripture is God-breathed and is useful for teaching, rebuking, correcting and training in righteousness, so that the servant of God may be thoroughly equipped for every good work.”

“God-breathed” is translated from the Greek word theopneustos and is only used in this passage.

Gotquestions.org says this Greek word means not only God-breathed but “inspired by God [or] due to the inspiration of God.”

As a Christian and one who believes in the verbal plenary inspiration of the Bible (which means simply that all parts of the Bible in every word are inspired by God and carry the same authority, rightly interpreted), I do not believe the U.S. Constitution is divinely inspired nor do I think any Christian should.

I also believe this idea is at the heart of the Christian nationalism spreading across our land, which is decidedly unbiblical.

In other words, every person who believes such a doctrine, while their actions may be noble, they are experiencing Christian nationalism creep in their own belief systems.

They are worshipping the false idol of the “genius” of the U.S. Constitution by putting it on par with their Holy Scriptures.

As for me, only the Bible is divinely inspired because it points me my Savior, Jesus Christ, who alone is worthy of my worship and allegiance.