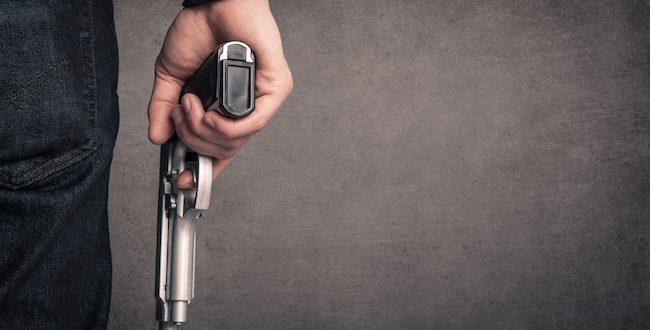 Man with gun in hand/Depositphoto

About two weeks ago, I remarked to a student as we left class that I really needed to turn off all news notifications on my phone.  Another school shooting headline had popped up — and my soul ached.  Turning off the phone would help me avoid the reality of the world for a while, at least until I chose to engage in the news reports.  It wouldn’t make the shootings stop, however, it would allow me to not feel and have to confront my emotions and thoughts.

As a father and a teacher, each school shooting brings a visceral reaction.  I recognize the young, white, male perpetrators, filled with great pain, confusion, and isolation.  As the names and faces of the victims roll by in news reports and in newsfeeds, I see my teens and the various middle school and high school teams I have worked with.  I see my students.  Each report tears to close to home.  I wonder what my role has been in these kids’ lives – and what my role will be in the future if I find myself in the middle of one of these tragedies.  While I understand intellectually that it is statistically insignificant that I will face a shooter in my time in academia, the fear and desire to put up barriers exists.

Pastor and Old Testament scholar Scott Starbuck teaches the Psalms at Gonzaga University.  The Psalms open the heavens with great joys, but they also show terrible pain and lamenting.  Starbuck builds on work by Walter Bruggeman in “Spirituality of the Psalms“ as he walks students through the Psalms.  The Psalms run parallel to our humanity.  There are Psalms of orientation, Psalms of disorientation, and Psalms of new orientation.  Psalms of orientation are reassuring and comforting.  These Psalms have us focused on and in relationship with God.  They are relatable to us, and reiterate what is comfortable and understood.

The first is to force orientation — to move to the arguments, protections, and world of the known — the world of the past. We cling to what is familiar as we try to gain our bearings.  Even if it isn’t perfect, the movement into the known gives the lamenter the peace of mind. There is safety in the world of the familiar.  When faced with great pain and confusion coming out of a tragedy like that in Parkland, Florida, we move to comfortable arguments and positions of safety.  Take away all of the guns or give everybody a gun.  We stand our ground on our barricade, grasping for what is safe and known.

However, the more raw, scary, and vulnerable direction to take is away from the familiar. It is to embrace the disorientation and explore it, understand it, and engage in a new reality as a part of our new orientation process.  While uncomfortable to sit in the darkness, this is where spiritual growth, relationship, and self-understanding.  Digging in the dark, rich soil is where new growth comes.  New orientation out of the depths.

Much has been made over the past few years of returning America to a place of orientation, a place that may not be perfect, but it is comfortable and known.  There is a desire to reorient the country to make America great again.   Running parallel to this is the push to make men great again by returning to the standard, known definitions of masculinity.  Following the Florida school shooting, comedian Michael Ian Black made poignant postings ins social media and made interview rounds pronouncing that boys are broken.  One of the commonalities we see in mass school shootings is that the perpetrator is a white male who has lashed out against our safe culture in horrific ways.  We struggle as we seek to understand the shooter, knowing that no amount of understanding about the emptiness within the shooter excuses their actions.  However, it is hard to ignore that these are broken boys choosing to embrace violence and aggression, cornerstones of the traditional masculine mystique.  In their deep disorientation, they grasp for orientation and end up further out of control.

What may be missing in the extremely limited definitions of masculinity — and the extreme limits we place on the expression of the thoughts and emotions of boys — is a discussion of new orientation, or at least, how to be in disorientation. We, as a society, lack a language to use with our young men, and lack a language to give them to express themselves.  We haven’t equipped our boys with the tools to understand their emotions, how to work through the complexities of relationships, and how to navigate the depths of disorientation as they seek to move out of the dirt into areas of new growth.

If our boys are broken, as we all are, what are we giving them so that they can find healing, and ultimately, become whole men?

Previous New Understandings of the Lenten Season
Next Ask An Eastern Orthodox Christian: On Beards