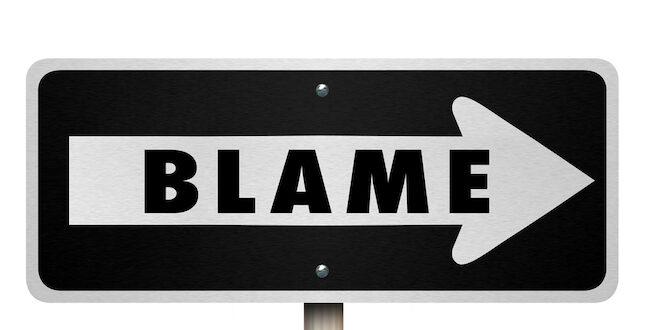 Shame and Blame are Each a Cruel Game

Shame and Blame are Each a Cruel Game

Ian Morgan Kron is an Episcopal priest, a psychotherapist, and a best-selling author. He wrote the foreword for ”True Companions,” a new book by another psychotherapist, Dr. Kelly Flanagan. Kron tells of playing whack-a-mole with his inner demons that wouldn’t stay whacked. ‘“What is happening to me?” I asked my therapist. His answer gave me the vocation I’ve been on ever since. “’ You’re waking up!’”

Well, I hope this read for you contributes to a wake-up call to better understand the power of “shame” and “blame.” I contend that if we better understand that power, we can better decide whether to play – or stop playing – the “Shame Game” and the “Blame Game.” Each is a cruel game to play! Wake up to this truth piece!

Consider this an alternative way for you to consider shame and blame. This summer, I wrote a letter to the editor trying to shame a Bonner County political group for unjustly attacking one of their members. I “shamed” them in an attempt to make them feel guilty for their attitude. But I’ve stopped playing the shame game; shame and guilt are usually associated in our culture.

So, here’s a different look at the Hebrew Bible’s understanding of shame. Adam and Eve experienced shame because they were naked (Gen. 3:11-21). But did God guilt them for being naked? No, God sewed clothing for them. God wasn’t morally offended, but God did honor their shameful feeling. Not moral guilt, but something else caused their shame.

This story suggests shame doesn’t result from what we do, but it’s part of our basic identity as human beings. Wow! The story also suggests that our immoral behavior isn’t going to stop God from loving us, but God loving us may positively impact our moral behavior. Wow again!

Let’s bring a Jesus parable into this reflection. Matthew 13 tells the Wheat and the Weeds story, where Jesus tells of weeds coming up in a field of wheat. But don’t pull the weeds, he says, before the wheat is ready to harvest, or you might pull out the wheat also. In human terms, we are what we are, a contradictory mix of wheat and weed.

When we can’t deal with our inner contradictions, it’s easier to project our shameful feelings into blaming others. Our attempts to shame someone, even ourselves, seem fair game when they/we mess up.

But maybe we’re talking about “blame.” We quickly blame someone, or ourselves, when a mistake has been made. Or we think a mistake was made.

Blame is based on someone else’s assumed guilt. And since we’re rarely courageous enough to admit our responsibility, our participation in that mistake, we need someone to blame. Blame is running amok in the halls of Congress, state legislatures, in school board meetings, hospitals, even grocery stores – anywhere people are ready to angrily blame others about Covid or some political controversy that fuels our anger.

“Shame” and “Blame” are cruel games. They’re destructive efforts to avoid, deflect, and project our deniable struggles as humans onto others who struggle as much, or more than we do. They easily become cruel efforts to somehow make us feel better – maybe less guilty about something we want to avoid.

These games are transactional by their nature. The biblical witness isn’t into transactions, but transformations. That only happens when we realize our games are twisted efforts to pretend, we’re God. We’re not! Transformation happens when our innate human humility and goodness let us see God more clearly, so we can feel safe enough to ourselves more honestly.

Previous Virtual fundraiser seeks to raise money for Salish School of Spokane
Next Study: Attendance hemorrhaging at small and midsize US congregations