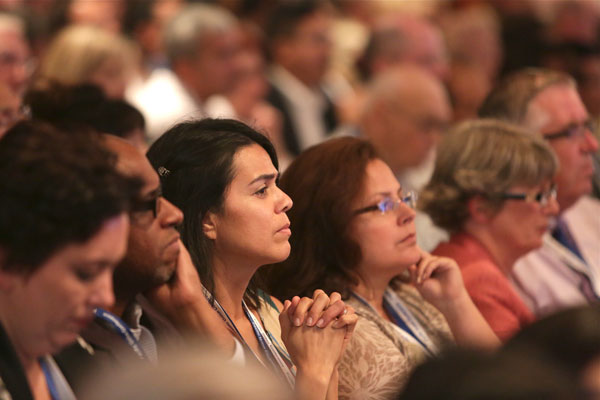 Two U.S. regional groups of the Seventh-day Adventist Church have recently approved the ordination of women pastors, moving faster than the worldwide church’s study of the issue.

The Pacific Union Conference, which includes California and four other Western states, voted 79 percent to 21 percent at a special session on Aug. 19 to “approve ordinations to the gospel ministry without regard to gender.” Weeks earlier, the Maryland-based Columbia Union Conference, which includes eight Mid-Atlantic states, adopted a similar change in its policy, with 80 percent in favor.

World leaders of the church – who appealed for unity before the votes were cast – said they were disappointed with the conferences’ actions. They said the Columbia Union’s July 29 action was “not in harmony” with the general policy of the church, and said the Pacific Union would “preempt the collective decisions of the world church regarding ordination.’’

Leaders of the Maryland-based Seventh-day Adventist Church, which is best known for observing the Sabbath on Saturday instead of Sunday, are in the midst of studying the “theology of ordination” for possible consideration at their 2015 General Conference Session.

In 1990, the General Conference Session, the highest authority of the global church, approved a recommendation that prevented authorization of ordination of women to the gospel ministry. Five years later, it rejected a request from its North American Division that its regional groups be permitted to authorize ordination regardless of gender.

In an official response to the Pacific Union, Seventh-day Adventist Church President Ted N.C. Wilson and other officers cited those previous decisions and said world church leaders “will carefully review the situation and determine how to respond,” possibly at an October meeting.

Adventists are not the first group to face disparate action on women's ordination. In 1974, 11 women were “irregularly” ordained as priests in the Episcopal Church, two years before the national church voted to allow female priests and bishops.

“I see it as a move of God,” said King, 34. “The church is recognizing what he has been doing for a long time.”

But King said everyone is not rejoicing, and she thinks the divide is more generational than geographical.

“You have older people who absolutely don’t believe in this and young people who are saying, `What’ s the big deal?’” she said.

Pastor Courtney Ray, who serves as an associate pastor at a church in Compton, Calif., called the Pacific Union decision “long overdue.”  She chose not to be “commissioned” and now looks forward to an ordination ceremony if an executive committee approves her for ordination.

Ray said there was a tension between wanting to be sensitive to church leaders’ desire for everyone to “move together on this issue” and the sense of others who felt it was a “bad witness” for there to be different designations for male and female clergy.

“But the bottom line is that if something is right, then there’s never a time to wait to do the right thing,” said Ray, 31.

Pastor Stephen Bohr, an opponent of women’s ordination who leads an Adventist church in Fresno, Calif., said the Bible calls for women to have different roles from men. By his reading, women can be prophets – such as church co-founder Ellen White –  and deaconesses, but only men can be pastors.

“I just am disappointed that the Pacific Union would launch out on its own and not wait for the world church to make a determination,” said Bohr, 62. “I think they jumped the gun.”

Garrett Caldwell, a spokesman for the world church, said there is “excitement’’ in many corners of the Seventh-day Adventist Church about the possibility of full recognition of women’s ministry roles.

“There’s an anticipation of that recognition, but I think the greatest concern is that as this body grows and matures and adapts that it is able to stay a united body,” he said.