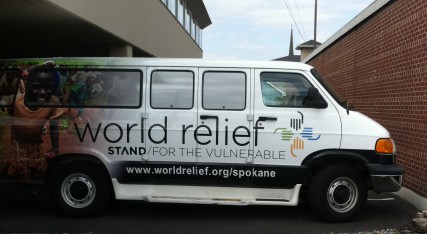 Moving to a new city isn’t easy. Trust me, I know. You have to learn your way around, learn new policies and meet new people. It takes awhile to adjust. But moving to a whole new country, that’s another story. Where do you start? How do you find work? Learn the language? Spokane has a rather large immigrant population and if it wasn’t for World Relief Spokane, I’m not sure what these folks would do. Don’t confuse World Relief with Catholic Relief Services or World Vision. This group isn’t designed to respond to natural disasters or sponsor a child. It’s here to help people start a new life. It’s a nonprofit refugeeresettlementagency that depends on the big hearts of volunteers. I met with Director Mark Kadel yesterday and he explained that refugees bring cultural and religious diversity to Spokane. World Relief is an evangelical organization, but it’s ecumenical in its services. Sitting in the waiting room yesterday I saw Christians and Muslims sitting side by side. “We serve everybody the same,” Kadel said. Staff from World Relief Spokane will likely blog for Religion News Spokane come January. They’re eager to bring awareness to the community anddispel the wrong ideas many have about immigrants. They also want to address human trafficking. Meanwhile, if you’re interested in helping this organization there is a volunteer orientation later this month. And mark Oct. 22 on your calendar. As a fundraiser, World Relief is hosting an art and fashion show that I know will be awesome.