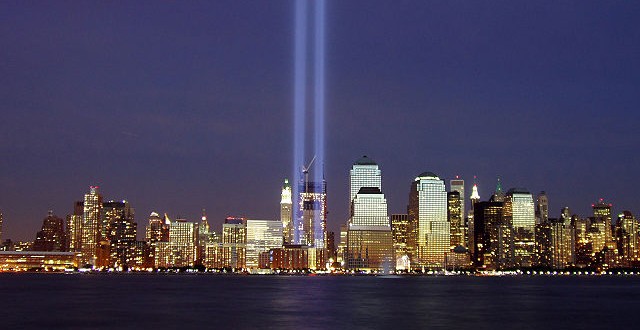 Two beams of light represent the former Twin Towers of the World Trade Center during a memorial of the September 11, 2001 attacks./Wikipedia photo by Derek Jensen

Sept. 11 attacks inspire us to serve one another

The anniversary of Sept. 11 is always a somber time of year for me. I remember vividly, as many others do, exactly what I was doing when I heard the tragic news that the World Trade Center Towers had collapsed. I couldn’t even fathom what had occurred. Jet liners crashing into buildings? There had to be a huge mistake. Those types of things didn’t happen. Maybe it was an accident. Maybe I was reading the television screen wrong. Maybe I was still sleeping. I was 18 years old at the time, getting ready to start college, and little did I understand at that time, just how the world was about to change before my eyes.

I remember the shock I had most of that day and the days that followed, watching hour after hour of the carnage and destruction on the streets of New York and at the Pentagon. The images of dust covered workers recovering bodies and still smoldering ruins became engrained in my mind. I remember wanting to go and do something, anything to assist those who were affected. And yet I felt so helpless to do anything. I remember donating money to the Red Cross, saying a ton of prayers for the families of the victims and first responders that labored to rescue people still trapped, and recover those who were lost.  But that still felt inadequate just due to the sheer immensity of what had occurred.

By and large, it was my generation that fulfilled the call to arms and went to war, many giving the ultimate sacrifice in an attempt to find those responsible for planning and carrying out such a heinous crime. It seems so strange and surreal now.  And even though I knew none of the victims personally, and I didn’t send any family members off to war (though my brother-in-law was close to deploying), my heart was burdened with sorrow for those who died, and those who sacrificed time away from loved ones to serve their community and country.

I believe that it was those moments that set me on the course of my own service to my community. I knew I wanted to be able to give back in moments of crisis. I knew I didn’t want to feel like I couldn’t help in some way. I just wasn’t sure how that would play out.

Later in life, when I became a volunteer firefighter, the attacks at the World Trade Center took on more significance to me and I realized a fulfillment of how that day had really changed my future. As a part of the brotherhood of firefighters, I took an oath to serve my community in times of crisis, knowing fully well the dangers that could come my way. I do not claim to be brave or a hero. 343 of my brothers who charged headfirst in to maddening chaos in an attempt to save lives are the example of bravery and the definition of hero.

My only hope is to keep their memory alive, and serve as they would have served.

Of the 2,977 victims killed on Sept. 11, 412 were emergency workers in New York City. These were 412 people who knowingly risked everything to serve others. These were people who believed in something so strongly, namely serving each other, that they were willing to sacrifice everything. Whether they realized it or not, there act of selflessness was the greatest act of love one could offer. John 15:13 tells us, “Greater love hath no man than this, that a man lay down his life for his friends.”

Even though I mourn for the loss of all who died, I am encouraged by the fact that we live in a place where such bravery and self-sacrifice shines like a beacon through the rubble in the darkest of times. That light is not just in our first responders. Americans in general love to serve each other in times of crisis. We have seen it over and over again in various natural disasters, people from all walks of live coming together to take care of each other. It is what knits us together as communities and ultimately as a nation.

As we commemorate the anniversary of 9/11, I would encourage you to look at the example of those that gave all and how they willingly served their fellow man. Not all of us will be asked to make the ultimate sacrifice. Make a goal today to sacrifice some time to go out and serve, even if it is only saying hello, or offering to hold a door. There are so many people who need uplifted and worthy causes to support.

We need to be knitted together more now than ever and it is my belief that service to one another is the key to healing our increasingly fractured nation.

Previous Ask An Eastern Orthodox Christian: Conflicts in your faith
Next The Imam’s Widow

The officer arrived to see our youth group meeting safely outside, socially distanced and wearing masks. He commended the group and its leaders and told them to proceed.