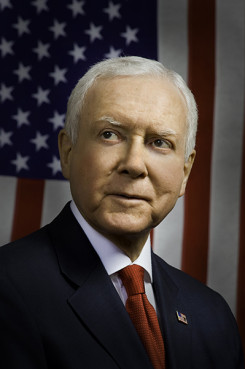 Senator says gay marriage as ‘law of the land’ is inevitable

“Let’s face it, anybody who does not believe that gay marriage is going to be the law of the land just hasn’t been observing what’s going on,” the Utah Republican said Wednesday (May 28) on KSL Radio’s “Doug Wright Show.”

“There is a question whether (the courts) should be able to tell the states what they can or cannot do with something as important as marriage, but the trend right now in the courts is to permit gay marriage and anybody who doesn’t admit that just isn’t living in the real world.”

Hatch, whose Senate website shows him supporting a constitutional amendment to declare marriage as exclusively between a man and a woman, has in the past railed against “liberal judges” and practitioners of “judicial activism” for attempting to foist gay marriage on society.

“Ultimately,” he says on the website, “the American people, not unelected judges, should decide policy on critical social issues such as this one.”

The seven-term Republican’s tone was strikingly different during his interview with Wright.

He defended two U.S. district judges: Robert Shelby, whose Dec. 20 ruling overturned Utah’s ban on same-sex marriage, and Dale Kimball, who declared that Utah must recognize and uphold all legal rights of the 1,000-plus same-sex couples who wed in the state before a Jan. 6 stay.

While he said he disagreed with their decisions, Hatch described them as excellent judges who were attempting to follow the law.

“I think it’s a portent of the future that sooner or later gay marriage is probably going to be approved by the Supreme Court of the United States, certainly as the people in this country move towards it, especially young people. I don’t think that’s the right way to go; on the other hand, I do accept whatever the courts say.”

Hatch, a former chairman of the Senate Judiciary Committee, played a key role in the nominations of both judges under Democratic presidents. He has not joined with some other Utah Republicans in sharply criticizing Shelby.

The senator indicated a decision by the U.S. Supreme Court may be forthcoming next year, calling that “an appropriate time to decide this issue once and for all. It’s never going to be fully accepted by a lot of people and, frankly, it won’t be accepted by a lot of the churches.”