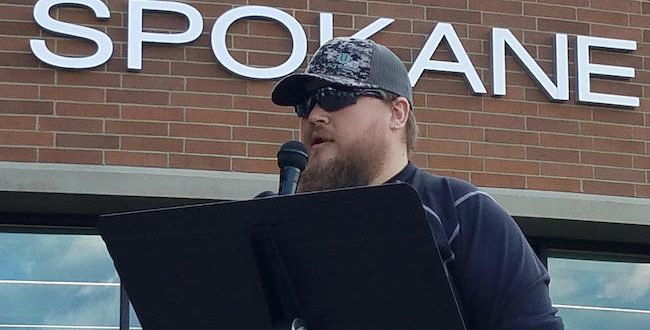 Tanner Rowe, the whistleblower who released the document “Biblical Basis for War” that involved Washington State Rep. Matt Shea, received the second Leadership of Conscience Medal from Faith Leaders and Leaders of Conscience on Tuesday afternoon outside in Spokane Valley City Hall courtyard at a Truthful Tuesday Vigil.

“The current political divide stipulates that you align with one political party or the other it demands strict adherence to the rigid tenets promoted by either party,” Rowe continued. “If you do not conform you are an Other. I, for a while now, have been an Other.”

To be ‘an Other,’ he explained, meant to be shouted down, ridiculed and defamed often by their own party or both.  He added that the mainstream media and social media have pushed the political divide by promoting stories that provoke outrage and anger among Americans, resulting in turning the divide into a colossal chasm.

“I believe the panacea to our current condition is to regain our understanding of liberty, not that of Liberty State in Matt Shea and dominionism,” he said.

Before being divided into political parties, Rowe said that every person, regardless of their cultural, religious and economic background, was an individual and he believes that individuals are unequivocally the most precious minority that this country has.

“Individual liberty stipulates that so long as one does not harm or detract from another individual’s life, liberty, property or wealth that they should be able to live the life that suits them,” he said. “I believe that we, collectively as a people, lost our way when we forgot this elementary and imperative principle and commenced our collective assault upon the liberties of our fellow man.”

He added that individual liberty comes at the expense of understanding and if people want liberty, they need to understand that it is okay that there will be individuals who live a life and make choices that they do not agree with.

“Our right to speak freely, to debate, to assemble, to worship a higher power or not, to defend ourselves, to pursue our individual versions of happiness are more important than whether or not the individual across the street agrees with our personal choices,” he said.

He said that the ideals of liberty that lie at the foundation on which the U.S. was founded on fly in the face of dominionism.  He added that dominionism is a blight on the community where its only goal is to force everyone to live under its perverse tenets with tyranny at its very essence.

“Dominionism has sown deep roots in our communities at all levels, this has happened because many of us, myself included, have been apathetic and not paying attention to what’s been going on around us,” he said. “And many of us have refused to heed the warnings, which were being brought forward by people who were aware of what was happening, and my only regret is that it took so long for me to recognize it and that I didn’t stand up sooner.”

Rowe mentioned the Liberty State Gala that occurred last May, which sought to fundraise for a proposed 51st state, saying that it would be a dominionist state where there would be no liberty for those who live in it and question its leadership.

Citing the Constitution and Treaty of Tripoli, Rowe said that people, whether they believe in God or not, must recognize that any kind of religion brought into the government breeds tyranny for those who do not follow the religion that comes into power.

Regardless of race, sexual orientation and political philosophy, Rowe said that people should stand together to push dominionism back to where it should be sitting around a campfire with people they don’t agree with and not in the government.

When it came to releasing the “Biblical Basis for War” document, Rowe said it was a scary conversation he had with Jay Pounder, the whistleblower who leaked messages involving Shea and the first recipient of the medal, because they would be facing threats for it. However, he added that because these people are relentless in their resolve to ensure they gain the foothold in the power they want, we must relentless in our resolve to fight back against it.

For the people who are afraid to come forward, he said now is the time and he knows how scary it is because it is hard and they will face adversity, but, in that adversity, a lot of people will stand behind them.

“I don’t feel that this award belongs to me, it belongs to everybody who is willing to stand and to those who are even scared to come forward but have talked to us and told us their story,” he said.

Rowe ended his speech with five words, “We will not yield, ever.”

Pounder bestowed the medal upon Rowe alongside Rowe’s dad and family.  Along with the medal and certificate, Rowe received a card similar to the one Pounder was given.

A moment of silence was held for the ringing of the bell, A Call to Courage.  Afterwards, three presenters from diverse backgrounds spoke about standing up against hate, moving away from it and what truth is.  These speakers included environmentalist Tracy Morgan, who spoke as a member of the Buddhist community, One Peace, Many Paths co-director Joan Broeckling and Rev. Gen Heywood, convener of Faith Leaders and Leaders of Conscience, who read a statement from Bishop Rev. William Barber several years back.

Close to the end of the ceremony, two presenters read quotes from about standing up for justice and doing what is right from historical figures including George Washington, Thomas Jefferson, J.K. Rowling, Davy Crockett, Mahatma Gandhi, Gloria Steinem and others.

At the end of the ceremony, Pounder provided the benediction.

Attendees were given green cards to nominate the next recipient of the award, which is currently planned to be given on Aug. 13 at the same time and place.