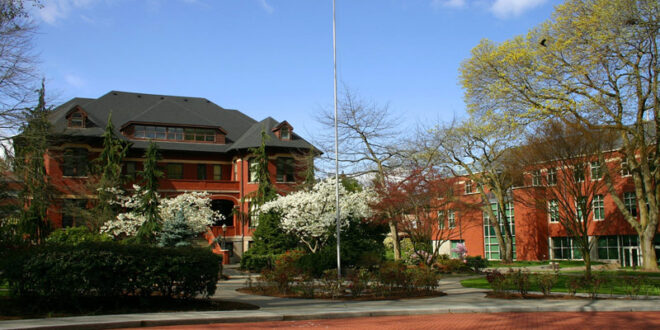 Students continue a three-week-long sit-in at Seattle Pacific University to protest the school’s traditional views on human sexuality and its policy against hiring full-time faculty who violate it, including those who engage in homosexual behavior.

The sit-in comes after over a year of controversy surrounding the issue.

On May 23, the board of trustees of SPU issued a statement, saying, “After careful consideration of multiple and complex concerns, the Board of Trustees has reached the decision to retain Seattle Pacific University’s current employee lifestyle expectations regarding sexual conduct.

“The decision means SPU’s employee conduct expectations continue to reflect a traditional view on Biblical marriage and sexuality, as an expression of long-held church teaching and biblical interpretation.”

On May 24, the student protest began. The university’s director of public information, Tracy Norlen, confirmed the sit-in is continuing in its third week in front of the president’s office.

“The sit-in has not affected the university’s ability to do business,” she wrote in an email to MinistryWatch. “The President’s Office and all offices and classrooms in Demaray Hall remain open. Summer classes are now in session.”

A group called Associated Students of Seattle Pacific has set up an Instagram account with updates on the protest. In addition, a Twitter account called “Engaygetheculture” claims, “Select members of the SPU Board of Trustees are holding our campus hostage with homophobic policies,” and that the protests won’t be ending “any time soon.”

Faculty, staff, fellow students, alumni and others have supplied items for students at the sit-in, Norlen added.

One of the board’s reasons for holding to its current views on human sexuality is to remain “in communion with its founding denomination, the Free Methodist Church USA, as a core part of its historical identity as a Christian university.”

SPU was founded by Free Methodists in 1891. The Free Methodist church began in 1860 and is currently headquartered in Indianapolis. It has about 828 congregations in the United States.

SPU’s statement of faith, ratified by the board of trustees in 2004, emphasizes its characteristics as historically orthodox, clearly evangelical, distinctively Wesleyan and genuinely ecumenical.

It also adopted a statement on human sexuality in 2005 that states, in part, “We believe it is in the context of the covenant of marriage between a man and a woman that the full expression of sexuality is to be experienced and celebrated and that such a commitment is part of God’s plan for human flourishing. Within the teaching of our religious tradition, we affirm that sexual experience is intended between a man and a woman.”

This statement and the school’s practice of excluding LGBTQ people from full-time positions led to the controversy that began in 2021.

A part-time faculty member in SPU’s nursing program, Jéaux Rinedahl, sued the school, claiming it rejected his application as a full-time associate professor because he is homosexual.

In March SPU was also named in a lawsuit, along with two dozen other Christian colleges, claiming the colleges unconstitutionally discriminate against LGBTQ students while receiving federal funding.

The university’s admissions webpage welcomes LGBTQ students. “Seattle Pacific University is committed to diversity, equity, and inclusion for our undergraduate and graduate students, welcoming and supporting lesbian, gay, bisexual, transgender, and queer students in all academic pursuits, faith practices, and life together in community.”

SPU’s 10th president, Daniel J. Martin, resigned in April 2021 amid the controversy to take a position with a health care system, although the university’s announcement of his departure did not mention the controversy as a motivation.

Later in April 2021, the faculty held a vote of “no confidence” in the board of trustees, approved by over 70% of those who voted.

The board has not yet “come to recognize that LGBTQ individuals can be faithful Christians, and as faculty and staff they would play positive roles on our campus, if we can hire them,” Kevin Neuhouser, sociology professor and faculty adviser for the LGBTQ student group on campus, said at the time.

A work group was then established to study the human sexuality and employment policy issues and present recommendations for going forward. It was composed of staff, faculty, senior administrators and trustees. Neuhouser was a co-chair, along with trustee Joshua Canada.

The group presented a summary of its conclusions in a letter to the board dated May 10, 2022.

In considering the issue, the group said its framework was the university’s mission statement, which declares it to be “a Christian university fully committed to engaging the culture and changing the world by graduating people of competence and character, becoming people of wisdom, and modeling grace-filled community.”

“Each ‘third-way’ variation suggests that SPU change its Employee Lifestyle Expectations to eliminate the prohibition of ‘same-sex sexual activity’ but maintain that sexuality activity should be expressed within the loving and committed bounds of a marriage covenant.”

Furthermore, the work group’s letter said, “Each variation expressed a desire to maintain an affiliation with our founding denomination, the Free Methodist Church.”

On June 3, 2022, after the board’s reaffirmation of the school’s statement on human sexuality and employment policy, the faculty senate passed a resolution by 80% of the votes cast that called for adoption of a third way.

This piece is republished from MinistryWatch with permission. Kim Roberts is a freelance writer who holds a Juris Doctor from Baylor University. She has homeschooled her three children and is happily married to her husband of 25 years. In her spare time, she enjoys reading, gardening, and coaching high school extemporaneous speaking and debate.