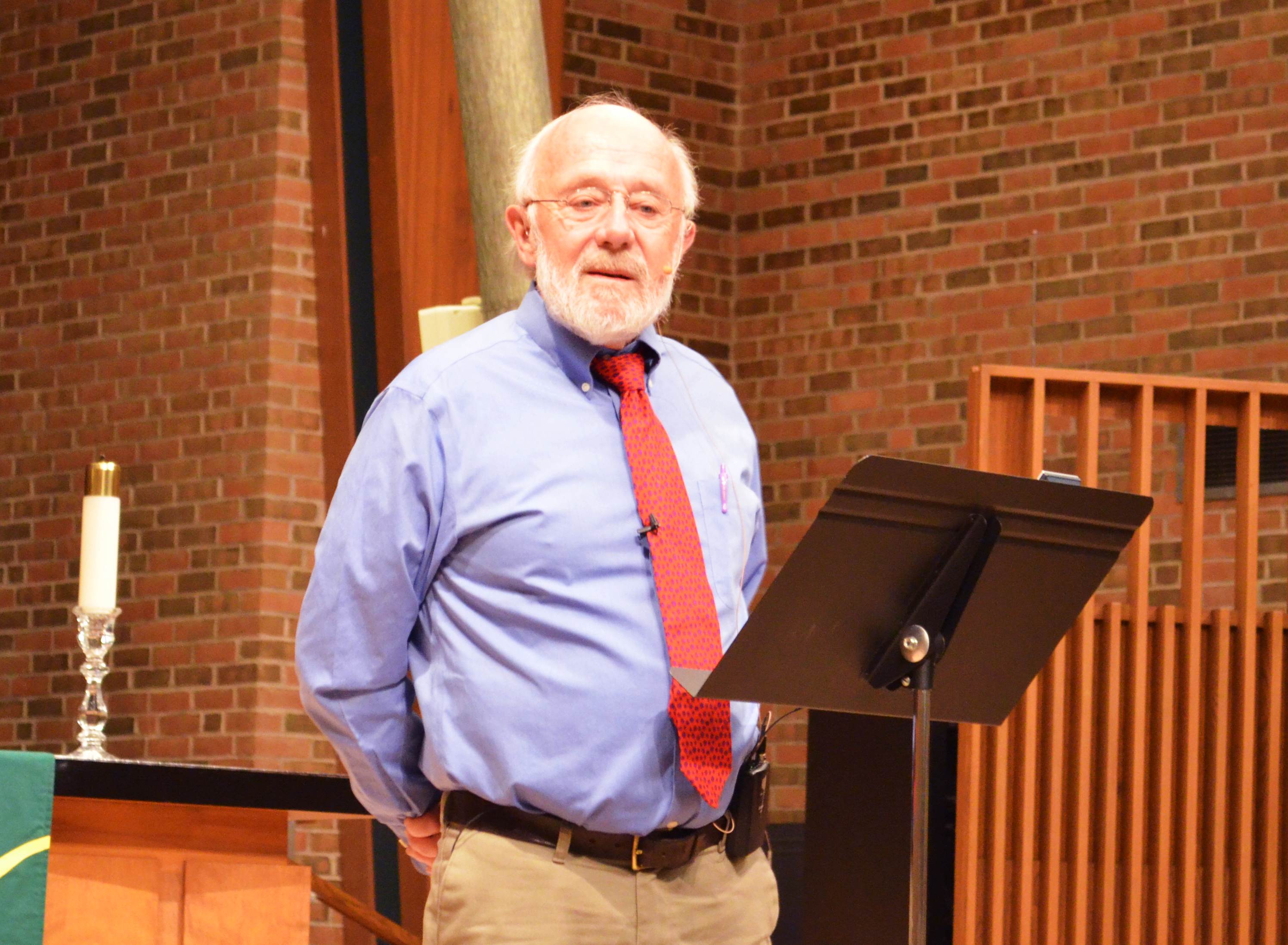 Marcus Borg, one of the nation’s leading biblical and Jesus scholars, said in a talk in Sylvania, Ohio Sept. 21 that the message of Christianity is increasingly misunderstood because core words are misused.

Salvation, for example, is commonly used today to describe going to heaven. In the Old Testament, salvation was never about the afterlife but about being rescued from death or from enemies.

The word redeemer is another example Borg used in his lecture, which was based on his latest book, “Speaking Christian” (2011). In today’s Christianity, the word redeemer is synonymous with Jesus who redeems people of their sin. But that was not what redeemer means in the Bible, Borg said. Redeemer and redemption “have nothing to do with sin and forgiveness but refer to liberation from slavery or bondage,” he said.

His lecture, titled “Reclaiming Christian Language,” was attended by a capacity crowd of 300 at Sylvania United Church of Christ.

Borg said the way words are used sets up a “framework” that shapes the meaning of Christian language and, hence, the way people see reality and form an “ethos” or way of life.

Among other words in Christianity that are commonly misused and misunderstood, according to Borg, are:

Borg, who earned a doctorate from Oxford University and was an active member of the Jesus Seminar, spoke with gentle, professorial tone that was lightened by a sense of humor.

Regarding righteousness, he said that if someone is described as “full of righteousness, would you want to meet that person? Sounds like a moral creep. Not only upright but uptight.”

If instead of righteousness the person was described as “full of justice,” it would not carry such a negative connotation, he said.

When such foundational terms fail to convey their true intentions, the result is a serious distortion in the concepts and practices of Christians and Christianity, according to Borg.

When the afterlife becomes the main focus of a religious group, it detracts from life in this world and distorts the central meaning of Christianity, which is our own transformation as individuals and of humanity’s impact on the world, he said.

The retired Oregon State professor said another problem with the language of Christianity is that a growing percentage of Americans do not attend church and have no basic understanding of the Bible.

In Oregon, where he taught, only between 22 and 28 percent of people have a connection to a church. It is the most secular state, despite Vermont’s efforts to claim that top spot., he said jokingly. But it means about three-quarters of Oregonians are unchurched.

Borg said he would start the school year by asking his Oregon State students to write down some of their thoughts about the Bible, and said some of the notable answers included, “There’s a story of a guy and a fish in there,” and, “Christians are really against trespassing.”

Borg, the Canon Theologian at Trinity Episcopal Cathedral in Portland, Ore., held the Hundere Chair of Religion and Culture in the Philosophy Department at Oregon State University until his retirement in 2007. He also served as chair of the Historical Jesus section of the Society of Biblical Literature.

Among the 20 books he has written are the best-sellers “Meeting Jesus Again for the First Time”  (1994) and “Jesus: Uncovering the Life, Teachings and Relevance of a Religious Revolutionary”  (2006).

I would have to totally disagree with the premise of these thoughts, and the idea that the words listed and their supposed “real” meaning, is false. I could record a lengthy list of the Biblical references that absolutely support righteousness to mean moral purity, and in God’s case, absolute moral purity, His own conformity to His perfect, holy Nature, or that sacrifice means substitution, which is the very heart of the gospel of Jesus Christ. If Christ didn’t die for us, then we are still in our sin. But then I suppose sin doesn’t mean our failure to measure up to God’s holy standard in any way, but something less unseemly. In any case, speaking things softly does not make them right, and God calls us to the truth, whether humorous or not. I don’t think there’s any problem with the words of true Christian doctrine, just a problem with being under submission to what these words declare.

Intriguing post. Borg’s understanding of biblical concepts and words being misused by Christians reflects how he approaches biblical interpretation with critical inquiry (some would say skeptic). He was once part of the Jesus Seminar that produced “What Did Jesus Really Say?” This book isolated Jesus’ recorded statements in the New Testament with a color-coded scheme (four colors) depending on whether Jesus really said it (red), maybe said it (pink), probably did not say it (gray), definitely did not say it (black).

I have learned from Borg and many other scholars on the different interpretations of words in the Bible. Former Rabbi Jack of Temple Beth Shalom on the South Hill indicated to me that Jews have no concept of hell or sin as Christians do. He says the word in the Old Testament (heyt) that is translated into Christian Bibles as ‘sin’ really means ‘missing the mark’ in the Tanakh (Hebrew Scriptures).

For me, the question of what happens to our sin/transgressions once forgiven, expiated, propitiated, removed, covered–however you want to translate the Hebrew verb kpr, is crucial.

I remebered that group in the back of my mind when I read the article. Attempts by critics to put doubt in people’s minds about the truth, accuracy, efficacy or suitability of the Bible, in my opinion, is what the apostle John is talking about in I John 2:18-24, when he says that the spirit of anti-christ was already alive in the world 2000 years ago and definitely is today. Soft spoken, winsome, an angel of light? Sin is missing the mark, and God in His holy perfection can’t allow missing the mark to pass unpunished. If the command is, Thou shalt not murder, then missing the mark is murdering someone. But this act of sin came from a heart that was already prone to sinning and is just acting out, first the thought, then the action.