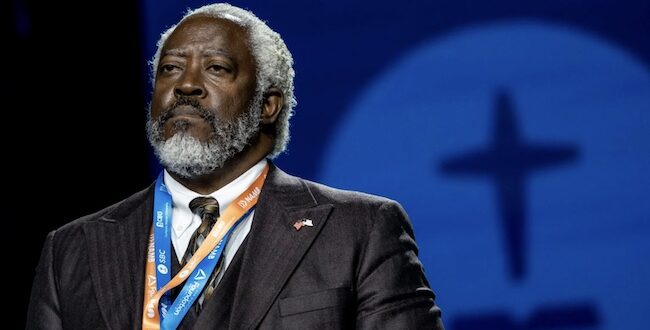 ANAHEIM, Calif. — A week before the Southern Baptist Convention’s annual meeting, when a massive report about its leaders’ mishandling of sexual abuse claims was already drawing attention, Executive Committee Chairman Rolland Slade was asked to read Scripture before a worship service at the start of the two-day gathering.

He chose Psalm 51, David’s song of lament after being caught in his abusive and immoral behavior.

“That’s David’s heart in that, his prayer to the Lord to clean him, to make him whiter than snow,” said Slade in a Wednesday (June 15) interview. “And that’s my heart’s desire for us as a convention, and as a network of churches.”

Over the course of several days, Slade, SBC President Ed Litton and the Southern Baptists who joined them apologized to abuse survivors, including some in attendance at the annual meeting and Monday’s Executive Committee plenary.

On his third-to-the-last day as committee chair and member, the California pastor oversaw the last procedural votes needed to support the recommendations of a sexual abuse task force that were adopted the next day, including the creation of an abuser-tracking “Ministry Check” website.

Slade, 63, who pastors a church in El Cajon, said he was grateful to close out his committee service at a point where there was more being said and done than apologies.

It was Slade who signed an updated letter of engagement — with “no hesitation whatsoever” — with Guidepost Solutions after a lengthy 2021 battle to permit the waiving of privilege. Sixteen members of the committee quit along with President and CEO Ronnie Floyd and its long-term general counsel, objecting to the decision that would mean records of conversations about legal matters between committee staff and board members would no longer be confidential.

Once the independent investigation was complete, Slade, like anyone else interested, read the resulting 288-page Guidepost report.

“I think the one thing that surprised me more than anything was the list,” said Slade of the revelation that — after years of leaders denying requests from survivors and supporters to keep track of convicted abusers — the committee had been keeping a secret list doing just that.

Looking back, Slade said, he thinks he didn’t ask the proper question about the possibility of such a list, especially since “I’d thought a database would make sense.”

Slade, the first Black chair of the Executive Committee, mentioned when he led his first meeting as chair that his perspective on abuse was “personal” because his wife of more than 40 years is a survivor.

Tiffany Thigpen, an abuse survivor named in the report and the resolution of “lament and repentance” adopted Wednesday at the SBC meeting, credited Slade with helping those who had been abused to be seen and heard.

“Rolland has done an excellent job of navigating it all and being clear on his message and his direction, yet helping him navigate neutrality within the system, trying to bring people together,” said Thigpen, who attended a meeting when board members were divided about waiving privilege.

“They resigned because they felt that was what they needed to do and I honor that decision,” he said. “I voted yes because that’s what I needed to do.”

Slade also said he has learned lessons from colleagues — committee staffers and former SBC presidents — who were named in the report for their connections to abuse or other misdeeds, but he hasn’t forsaken them.

Slade said he never expected to lead the Executive Committee — which handles the business of the SBC outside its two-day meeting — at any time, let alone a particularly fraught one. On his last day as chair, in a backstage green room, his photo was taken with former SBC President Fred Luter, the first African American in that role, and religious broadcaster Tony Evans, both of whom addressed the Southern Baptists gathered in Anaheim.

“I never imagined that would happen,” he said.

The Rev. Kevin James, president of the SBC’s California African American Fellowship, recalled when Slade had another surprising situation — returning to the stage at last year’s convention after learning about the messengers’ unexpected vote for an independent investigation of his committee.

“That speaks to his leadership, that he is bought in, he’s sold out for Baptist life, Southern Baptist life, and doing things right but most of all honoring God,” said James. “When he stands up there, he’s not influenced by any side. He’s strictly ‘We’re going to do things that honor God.’”

The president of the denomination’s National African American Fellowship said at his organization’s annual banquet on Monday that Slade likely went through “a little bit of hell at times” and may still not be able to reveal all the challenges he faced.

“His humble yet firm leadership is not only worthy of applause from us but I believe that he moved under the leadership of God’s Holy Spirit in helping us as people deal with some very disturbing and sensitive matters within our convention,” said the Rev. Frank Williams.

As Slade departs his committee responsibilities, he probably still won’t have much free time. He’s on the advisory board of Little League International — and missed its international congress because it was occurring while he was in Anaheim. And he serves on a regional homelessness task force subcommittee that has a plan to reduce the disproportionately high percentage of homeless people in San Diego County who are Black. He also is in the midst of a project to complete six microhouses on his church’s property to provide temporary shelter to women and children.

Still with two credentials dangling from lanyards around his neck — one as a representative of Meridian Baptist Church and the other an all-access pass as Executive Committee chair, Slade was almost ready to pack up and drive home with the farewell tokens he’d received, including the committee’s “humble servant” award.

But he said neither his work addressing sexual abuse nor the efforts of other Southern Baptists are anywhere near over. He’ll be working with his local Baptists association, for which he is a moderator, seeking to fulfill the new recommendations for it from the task force.

“I moved the ball down, a little bit down the field, but we’ve got a long way to go to make all the churches safe,” he said.

Previous  The Afterlife: “A Hundredfold — Now, in THIS Age”
Next “If” – A Big Word in Communication