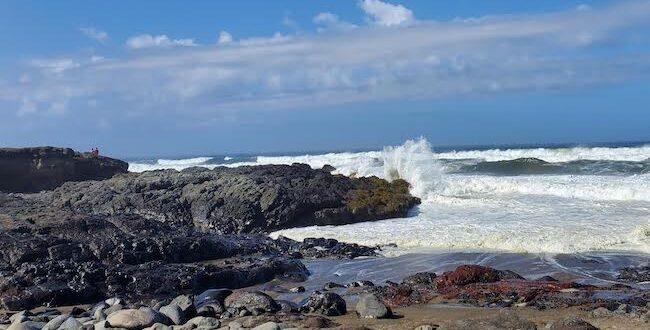 We said goodbye to our mother on Sunday.

Mom died in April 2020. It might have been COVID, she went so quickly. But she was 92, so it would not have taken much.

Because of the pandemic, only one of the three surviving brothers could be with her as she passed. For me and my brother in Scottsdale, a telephone goodbye just an hour or two before she died had to suffice.

We met in Yachats, her favorite place on the Oregon coast, at The Adobe, her favorite hotel. That is where she belongs the desk clerk told us as the staff made every effort to make us feel at home. Still, the goodbye was emotional. But the tears turned to laughter as a sneaker wave knocked us off our feet, soaked us to the skin as it took Mom out to sea. She would have laughed, too.

My mother lived a long life, though not always a happy one.

As a child, you don’t think about the complexities of life, the shades of gray that exist between the blacks and whites, the all-good or all-bad. For the fortunate among us, in our early years, mother love is unconditional. You love your mother. She loves you.

In time, as we grow older, we begin to fill out the real-life profile. We add dimension. Complexity. And maybe, towards the end, we develop a greater, more realistic appreciation.

My mother, Barbara Lee Smith, was born in Portland, Oregon, in January 1928. She was the third of three children, and she was born into a loving and supportive family. Even though the family was deeply wounded by the Great Depression, she described her childhood and early adult years as happy, maybe the happiest times of her life.

She graduated from Grant High School in Portland in 1946. She was college-ready but there was no college money, so she went to work. She was an elevator operator at the Meier & Frank department store for a time, then worked at the Portland Art Museum. She met my dad around that time.

Mom was a beauty, a beauty queen in fact, though at a relatively low level. Raised Jewish, she was the Portland Purim Queen in 1947 or ‘48. She told me once she would have liked to have been a Rose Princess during the annual Portland Rose Festival. But such competitions were rarely open to Jewish girls.

I learned most of this much later. As an old woman Mom had a terrific memory for her childhood and early adult experiences and she loved to tell stories. She even wrote some down as she worked sporadically on an autobiography that would be of interest only to the family.

Mom and Dad married in June 1948. He was engaged to another woman when, on a date, he spotted Mom across the room. He asked her out. She said no. He asked again. And again. She finally relented.

Dad was a handsome man, movie star looks. But the courtship was anything but smooth. Dad had uncertain job prospects and that was a concern. But mostly it was Dad’s mother who presented the problem. She did not think Mom was good enough for him, an attitude that persisted to the end of her life.

Dad’s persistence won out. Marriage put an end to college ambitions for both. Dad had to take what work he could find. He was a clerk in a jewelry store. He sold linoleum. He worked retail for a time. Mom started having babies. I was born in 1950. My sister Terri in 1952. Mom had planned to stop there. But the babies kept coming – Ron in 1955, Jeff in 1957 and Marty in 1959.

Managing the family was a big job so Mom stopped working outside the home about the time I was born. Dad settled into life as a traveling salesman, primarily working for a toy wholesaler and traveling all over the Northwest, usually three weeks out of every four. For most of my early life, Mom was a single parent for all intents and purposes. Times could be tough. There was never enough money for a growing family.

I didn’t appreciate the financial hardships we faced until later. As the oldest, I did come to know the daily challenges she faced raising five children. I did come to appreciate Mom’s beauty and genuinely appealing personality. And I did appreciate her constant presence, always loving, always compassionate – always there.

And then, when I was about nine, I learned something else. I learned about her ferocity.

It was 1959 and I was in the fourth grade at a new school in a new town. For any number of reasons, it was a difficult transition for me, made more difficult by a mean, nasty fourth grade teacher. I don’t know exactly why she didn’t like me. It might be because she overhead my desk mate comment on her “big butt,” a remark the teacher attributed to me. It was the only time I was ever sent to the principal’s office.

Mom would have none of it. Instead of confining me to bed in my upstairs room, she had a folding bed moved into the dining room. That is where I stayed for six weeks. Even while managing the rest of the kids, including my infant brother Marty, she worked with me for hours each day on fourth-grade work. She made flash cards for my arithmetic and spelling lessons. She had me write something almost every day. And she insisted I read.

I don’t know where the money came from, but one afternoon, she brought home the full set of World Book Encyclopedia, the least expensive edition you could buy (no classic leather binding) but the best, kid-friendly encyclopedia available. And I devoured the red-with-blue-trim volumes starting with A and going straight to Z, then to a collection of year-by-year annuals beginning with 1945.

By the time I got back to school, maybe a month before the end of the school year, I was ahead of the other students on almost every subject. And none of that mattered to my teacher. She was going to hold me back.

Years later, I learned that Mom had that decision reversed during a meeting with the teacher and the school principal. Mom rarely lost her temper in front of us. But as she told the story later, she lost it with the teacher and principal. Of course, I don’t have all the details. But Mom was uncompromising in her determination – and in her language, I suspect – to not let those hacks interfere with my education.

And the next school year she had my sister and I moved to a different school with teachers who fought for their kids, not against them.

Before that mono spring, I had not seen or appreciated those qualities in my mother. As I later understood, she needed them all to cope with and survive the difficulties that came from time to time as they come to all families.

I asked her once, in the last year or so of her life, from where did that fierceness come? Her parents were such gentle people. You don’t get that fierceness from your parents, she told me. You get it when you become a parent, you get it from your kids. And you return unconditional love.

Previous Cycling as a spiritual exercise
Next 85 Years Strong, Greek Fest Continues to Bring Communities Together