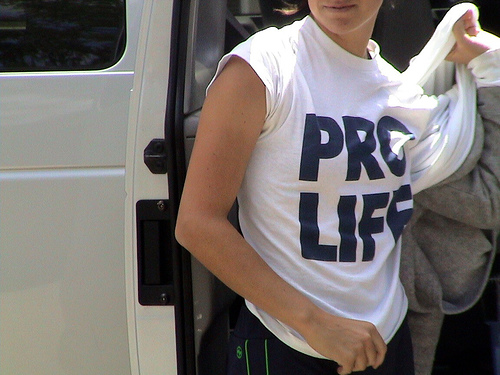 The contentious abortion debate in Texas took a bizarre twist on Tuesday when abortion supporters attempted to drown out anti-abortion activists with chants of “hail Satan.”  But, Life News reported Thursday, a Twitter account run by actual Satanists decried the chants, calling them “diabolical.”

“Unfortunate to see Satan's name used in such a diabolical manner. Another example of what 'Satanism' doesn't represent,” tweeted “UK Church of Satan.”

Reports of the confrontation sparked a great deal of conversation on Twitter last week.

Spontaneous demonstrations like this are not uncommon at abortion protests, but the chants caught many by surprise.

“I'm guessing that even the Horned One would regard association with the US abortion industry as bad PR,” Tim Stanley wrote at the UK Telegraph.

“I meant it as a joke but, er, it turns out I was right,” he added on Friday.

“You know the abortion proponents have gone too far when even lovers of the Devil himself are disclaiming the comments,” wrote Life News' Steven Ertell.

Bill Donohue of the Catholic League told Life News that it would be “unfair” to paint all abortion supporters as proponents of the chant.

“Among hard-core activists, though, there are no doubt more than just a few who feel comfortable with invoking Satan’s name in behalf of their cause. Here’s why I say this,” he said.

“There are writers and activists who support more than abortion rights—they hail it as a positive good. For example, the book by women’s studies professor Patricia Lunneborg, “Abortion: A Positive Decision,” boasts how abortion liberates women. The volume, “Abortion is a Blessing,” by militant atheist Anne Nicol Gaylor, sees abortion as a sacred right. So does French author Ginette Paris: her book, “The Sacrament of Abortion,” tells us exactly where she is coming from,” he added.

“Why wouldn't Satanism be pro-life? What else is there? We are all free to make choices. Agreeable or not. Everyone is entitled to choice,” the UK Church of Satan added.

“So, it’s official,” Stanley said.  “Even devil worshippers want nothing to do with the abortion lobby — even people who sacrifice chickens to the moon goddess and dream of eternal damnation with the Lord of Flies find abortion ethically distasteful.”

Previous TODAY – Coffee Talk: What does forgiveness look like?
Next The hardest goodbye

Satanists don’t worship the Devil though, they’re atheists. The word “Satan” in Satanism is the literal translation from Old Hebrew, and it means “adversary”. The oppose religion, they took the Satanic gimmick because it was the most obvious, anti-religion image. Satanism leaves personal choices up to the person, many Satanists are pro-choice, but many are pro-life as well, those issues are left up to the individual.

Saying that even devil worshipers are against abortion is extremely misleading, as they don’t worship (or believe in) the devil, and there are no moral restrictions as a whole, it’s based on the individual’s feelings and viewpoints (that’s why it’s not a religion, it doesn’t tell you what you have to think, it allows you to make your own decisions).