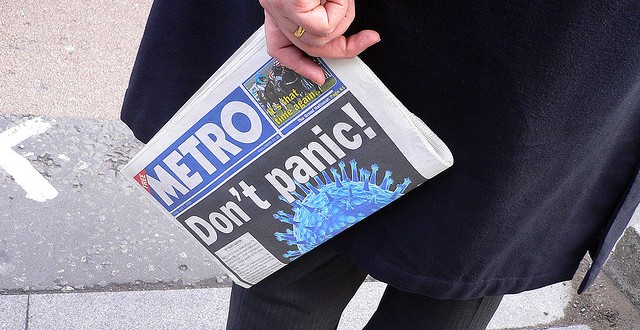 Until recently, I didn’t think much about the “Satanic panic” phenomenon of the 1980s. That’s somewhat surprising, since the decade-long Satanism scare inspired one of my favorite horror movies of the 2000s, writer-director Ti West’s ’80s-inflected “The House of the Devil.” Now that I’m reading the novel “Dark Places,” by “Gone Girl” author Gillian Flynn, satanic panic is on my mind again. According to the 1991 book “The Satanism Scare,” in the ’80s “antisatanism” became a cause célèbre in certain circles due to several “precursor movements” — “fundamentalist Christianity, the anticult movement, the development of ‘satanic churches,’ the new wave of child saving, and the survivor/recovery movement.”

Self-described adherents of Satanism have been making headlines lately. The nationwide legalization of same-sex marriage and the movement to defund Planned Parenthood are galvanizing the religious right. Some conservative commentators are stopping just short of calling Planned Parenthood satanic. All of this makes me wonder if another wave of Satanic panic is on its way. This one, I suspect, won’t be focused on bloody basement rituals. Instead, it’ll be framed to suit the climate of the current culture wars, in which some Americans wield their “sincerely held beliefs” like something in between a weapon and a superpower.

Satanic panic had lost most of its hold on America’s collective consciousness by the early ’90s. At the end of the ’80s, however, the anti-Satanist movement still had plenty of life left in it. In his 2006 book “Evil Incarnate: Rumors of Demonic Conspiracy and Ritual Abuse in History,” David Frankfurter notes that someone whose therapist or other provider diagnosed him or her as a victim of “Satanic ritual abuse” (SRA) might undergo Christian counseling, some type of exorcism ceremony, and/or involvement in an SRA survivor support group whose members identified as “anti-satanic warriors.” As Flynn points out in “Dark Places,” a number of people who may have been entirely innocent lost their reputations, and years of their lives, due to the witch-hunt atmosphere of the panic. (Flynn references the McMartin preschool trial specifically.)

Perhaps the satanic panic of the ’80s was a product of its time. Still, America has proven disturbingly incapable of learning from the mistakes of actual and figurative witch hunts in its past. Whether or not you want Planned Parenthood to be defunded, the phrase “selling baby parts for profit” is almost certainly lodged in your mind at this point. In an age of highly democratized media, too many people are still susceptible to panics based more on fear than facts. My hope is that, over time, we will all become less gullible and excitable and more thoughtful and truth-seeking.

Satan, the father of lies verses the Light of the world. With that it would seem visible obvious that a choice is at hand. Good job Neil, I counseled a “satanic” kid once while working in an outdoor program, I asked her to go off into the darkness and practice her rituals, amazing she was instantaneously healed.

Healed of what? Did she have a disease?

That’s my question too.

I suppose it’s OK to hope

Luther wisely said that the best way to resist the devil is to laugh at him. Taking satanism so seriously as to hunt it down is kind of giving ol’ fiery-pants too much credit.
Father Robert Capon, Episcopal priest, author and amateur chef once compared a nasty bottle of synthetic Kirsch made by an insecticide company to hell, because it was such a “paragon of awfulness.” He writes, “the devil, insofar as he exists, is good. What he does wrong with his existence is small compared to what God does right with him.” Of the kirsch he says, “for all its faults, it is not undrinkable.” 🙂
(quotations from Supper of the Lamb, by R. F. Capon, p. 7)

I remember the Satanic Panic well as I was just entering into Paganism i the early 1980s and it seem many of the American Pagans went underground during that period. It took a couple of years and quite a bit of traveling to find my first Pagans and to be invited to my first gathering.

One of the first mailing protests I took part in was when Jesse Helms wanted to add a amendment to a post office bill that would have denied postal bulk rates to nonprofit organizations related to either Witchcraft or Satanism. We managed to drop enough letters protesting it to stop the amendment before it got out of committee. Had it reached the floor it might have been hard to stop in the rising political power of the alleged Moral Majority.

Meanwhile show trials during the Satanic Panic would send a few dozen people in the United States Canada and England based on false testimony of brainwashed children created by phony recalled memory. The last American victim of those trials only got out of prison a couple of years ago.

Nor is the Satanic panic quite over. It reached South Africa in the 1990s pushed by Evangelic Christian ministers, some with former ties to our own Right Wing Christian groups, first in the Dutch South African Africakan population, and then again popped up in 2007 pushed by Evangelic Christian Ministers . It is still ongoing. The South African Police Service still has a unit specializing in something called Occult crimes, much as our own police forces were doing in the 1980s egged on by phony alleged Occult experts. I could easily see some of our America Tea Party crazies jumping back on the old Satanic Panic band wagon.

Thanks to both of you for your wonderful and insightful comments!

You guys, this is for real. Not the Onion.

Also see: “Satanist admits molesting 3 girls, recording it and distributing it”
“‘I Serve Darkness’: Oregon Gunman Wrote About Obsession with Satan in Reported Manifesto, Says Source”
“Man wants to give satanic invocation at county meeting”
“Self-proclaimed Satanist found dead in jail cell in NC”
“Suspect sought in hate crimes at Lake Tahoe-area churches” (re satanic church vandalism)
But the media-at-large have given us this slant — ad nauseum — for the past 30 years: “People have ‘misconception’ of Satanists, S.A. group’s leader says,” and, of course, “Satanic panic and America’s witch-hunt problem”
Establishment liberals cling to the “Satanic Panic” cover story that began with advocates of the perpetrators — particularly oily Village Voice huckster Debbie Nathan, who coined the phrase — and still reverberates through all channels of opinion formation. I am often ashamed of my fellow liberals. — AC

What about all the people who have molested children and are NOT Satanists? What about the mass shooters who aren’t? Also, I’m not sure how the Satanic invocation and the apparent jailhouse suicide are hardcore indictments of Satanism. I DO think many people have misconceptions about Satanists, and I sincerely doubt that more Satanists are committing terrible crimes than are people who identify as secular or even as people of another faith. (Full disclosure: I am not, and have never been, a Satanist. So I’m not exactly biased toward Satanism.)

It seems to me that a significant percentage of Satanists these days are pushing for statues and other symbolic things in order to communicate that Christianity isn’t the only faith that gets to benefit from religious freedom in America. So it’s Satanism as social/political satire, and that seems like a smart angle. I don’t really think there’s some kind of preponderance of awful violence being done today (or yesteryear) by Satanists in America or elsewhere.

A lot of people “serve darkness” due to mental illness or childhood trauma or whatever. I just don’t get the point of targeting Satanism unless we have evidence that it’s a threat to our wellbeing as individuals and as a nation, more so than, say, the average young white male who is furious because he can’t get a date and wants to impose his misogyny violently upon the culture as his last living act.