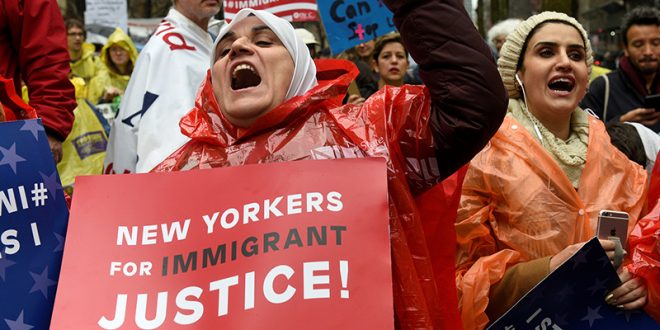 Palestinian American Manal Kawas, whose husband was deported from the United States, shouts while marching to Trump Tower during a protest organized by the New York Immigration Coalition against President-elect Donald Trump in the Manhattan borough of New York, on Dec. 18, 2016. Photo courtesy of Reuters/Darren Ornitz

(RNS) More than 800 congregations have declared themselves sanctuaries for undocumented immigrants, about double the number since Election Day.

Leaders of the sanctuary movement say the pace of churches and other houses of worship declaring themselves sanctuaries has quickened in the days leading up to the inauguration of President-elect Donald Trump on Friday (Jan. 20).

Trump has threatened to build a wall to keep Mexicans out of the U.S. and to deport records numbers of immigrants. The PICO National Network and other faith groups say that congregations need to take a “bold and prophetic” stand to protect those already vulnerable to deportation under the Obama administration, but have yet more to fear from Trump.

The sanctuary movement is responding to “higher international laws, and of course of our divine laws and sacred texts that call on us to resist these proposals of the next administration, that is rooted unfortunately in racism and anti-immigrant fervor,” the Rev. Noel Anderson, national grassroots organizer for Church World Service, said during a conference Tuesday (Jan. 17).

Bishop Dwayne Royster, political director of the PICO National Network and moderator of the call, said the sanctuary movement is expanding to include “any community that’s threatened by the discriminatory policies of the Trump administration.” He pointed to Trump’s call for a registry of Muslims, and spikes in hate crimes against them and other minorities during the campaign and since the election.

Imam Omar Suleiman, a professor of Islamic Studies at Southern Methodist University, who also participated in the call, said he will soon sign an open letter from a group of imams calling on mosques across the country to open their doors as sanctuaries to all who need it.

“Our faith teaches us that all people are worthy of humanity, regardless of their documentation status,” he said.

Previous Faith in the Streets: a Civics Lesson
Next Ask A Jew: Women in combat