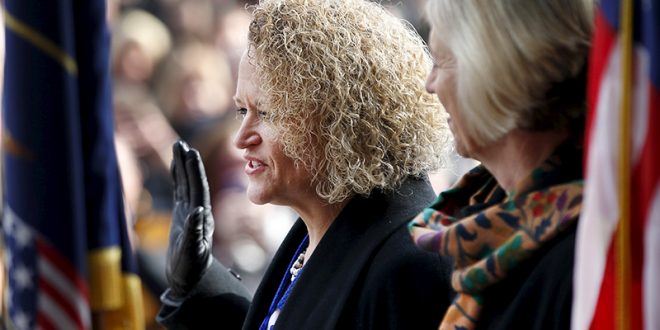 Jackie Biskupski, left, is sworn in as mayor as her finance Betty Iverson watches at Salt Lake City, Utah, on January 4, 2016. The former state lawmaker is the first openly gay person to hold the office. Photo courtesy of REUTERS/George Frey

(RNS) Brigham Young might not recognize the city he founded.

Salt Lake City — which serves as the global headquarters for the Church of Jesus Christ of Latter-day Saints — played host over the weekend to the marriage of Jackie Biskupski, the city’s first openly gay mayor, to her fiancee, Betty Iverson.

“Yesterday our family was brought together by marriage,” Biskupski wrote in a Facebook post Monday (Aug. 15). “We have always been bonded by love, but now we are joined by law.”

The mayor, who took office in January, is not a Mormon.

The private ceremony was performed by Kate Kendell, executive director of the National Center for Lesbian Rights, a longtime friend of the couple and a lawyer who also represented same-sex couples who sued Utah for the right to marry in 2014.

The wedding took place against the backdrop of another set of “mass resignations” from the LDS church by people upset over its policies toward its LGBT members. Several hundred people met  Saturday in City Creek Park, just across the street from Mormon pioneer Brigham Young’s house.

At least 100 of those gathered filed papers to remove their names from the church’s rolls, according to Quit Mormon, the group that held the gathering. They are protesting a 2015 church ruling that describes sexually active LGBT Mormons as apostates and requires that their children reject their parents before being baptized.

Quit Mormon, founded by Utah attorney and former Mormon Mark Naugle, claims to have helped more than 12,000 people resign from the church.

Utah has become less religious in recent years, and the LDS church, while maintaining a huge presence in the state, has lost some influence as members of other faiths and no faith have come to the state.

In 2007, a Pew Research survey found that 80 percent of adults in Utah said they were “absolutely certain” God exists; seven years later the number dropped to 61 percent.

In 1990, 70 percent of all adults in Utah were members of the LDS church. Today, that number has dropped to 60 percent.

Previous How long is lifelong?
Next Meidl says his Christian faith will help him lead Spokane’s police department