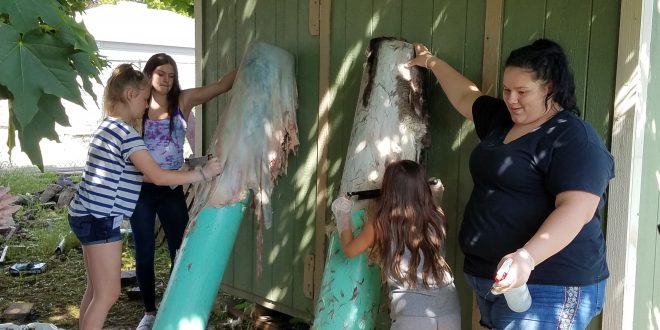 It was a beautiful Friday morning at Salish School of Spokane as its first Native Youth Culture Day was kicking off with the sun shining in the sky, the sound of drums echoing in the wind and the acrid scent of deer hide in the air. Elijah Murphy, a senior and organizer of the event, and other students from the Salish School of Spokane ILEAD Youth Class hosting the event, opened with a Syilx song and prayer using drums that they had made.

Murphy said the event was inspired by a Native youth conference at Suquamish Island where he noticed that the community was doing a lot to inspire Native youth in the area to get involved with their culture and traditions.

“I thought about our own city [Spokane] and our own culture and our traditions and stuff like that,” Murphy said, “and I noticed that there’s this huge lack of Native American students who are really into their culture.”

“None of them know how to make drums, they don’t know how to scrape hides, barely any of them know how to bead,” he said. “And so I realized that this was kind of a problem within our community, and so that inspired me to put on a day, a culture event, where kids would come in and learn about these things.”

Throughout the event, teams went to one of three workshops for around an hour before moving on to the next station.  These workshops consisted of hide scraping, drumming and beading.

At the hide scraping workshop, two attendees used draw knives to scrape the meat and fur from two deer hides that were donated to the school, which would be used to make drums.

Megan Caulkins, a student at the school and event leader at the hide scraping workshop, said that she wanted attendees to get the experience and learn to scrap hide.

Murphy said that the activity is an integral part to Native culture and one of the strongest and longest-lasting traditions, particularly when it comes to clothes, moccasins, beadwork, instruments and other aspects.

At the drumming station, attendees sat around a large drum made of buffalo hide, each using a certain drumstick when playing the songs.  Throughout each song, everyone would play the rhythm of it in unison with Arianna Mota, a student and event leader at the drumming workshop, and Pat Moses, a member of the Spokane tribe, who were singing throughout each one.

“The drumming is definitely one of my outlets for just sitting down and not thinking about anything just drumming and let your emotions out on the drum.” Mota said.

Murphy said that one of the ways songs were given to people was when “the creator would give it to them when they’re sleeping or when they’re doing work or just any time throughout the day” and they would hear the song in their heads and drop what they were doing and sing it to the people around them.  He added that the song would become their song, and that songs have been handed down from generation to generation.

At the beading workshop, attendees made key chains and other crafts using thin string, tiny beads and beeswax to repair the string.

Jaylisse Quinto, a student and event leader at the beading workshop, said that in her tribe beading was form of stature where the better a person’s beadwork was the higher in stature they were.  She added that today beading is used more for dancing at powwows.

Murphy said that beading is one of the most well-known Native traditions among Native youth because everyone’s mom and dad does it, and can be seen as earrings and pedants.

“It’s one of the things we’re able to modernize the most because part of the problem with our current upheld culture right now is the fact that we’re not able to modernize a lot of our traditions,” Murphy said. “Because people are either afraid of what might happen, or they want to stick to more traditional ways.”

By not modernizing culture, Murphy said that it puts it at risk of being left behind, especially when facing systematic genocide.  He added that they have to stay relevant to what their ancestors were doing, but need to bring culture to the modern times and make it better.

Using African American culture as an example, Murphy explained that the music started as rhythmic chants before moving into jazz, rock and roll, R&B, and hip-hop.

Even though Native culture has been in the same place, Murphy said it is not a bad thing, but there needs to be more done to take traditionally from the sounds that are used, push them forward and make them more modern.

Through modernizing beading, he said that they are keeping the tradition alive and well in a modern setting and making Native culture stronger.

After lunch, other activities on the agenda included playing a game called stickgame, a game of the tribes from the Pacific Northwest Coast play, and having language sessions.

“I really want them [attendees] to take away that there’s a part of their culture they’re kind of missing out on and that there are ways to reach out to their culture,” Murphy said.

He added that there are elders and knowledge keepers in the community that they can reach out to and not only learn from but get life advice from as well.

“If they’re ever going through hard things, the Native community is just so open to its people, but a lot of the people within the community don’t understand that,” he said. “Everyone here is going through something, but we’re at a point that we’re stable enough to where we can also help other people.”

If children are not taught the ways of their ancestors and elders, Murphy said they would lose their culture.  He added that their culture is an integral part of who they are, makes them a powerful force and more interconnected with each other, their ancestors, elders and everyone in the community around them.

Breakfast, lunch and dinner were provided to attendees.

Everything you need , you can just scrape ! https://roulettekr.com