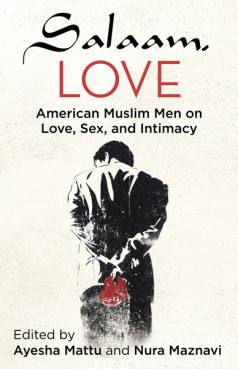 (RNS) Oppressive. Boorish. Misogynist: Those are the popular images of Muslim men and how they treat women.

But there’s more to it than that, thought Ayesha Mattu and Nura Maznavi, the editors of “Love, InshAllah: The Secret Love Lives of American Muslim Women.”

Many Muslims welcomed the two women’s 2012 collection of 25 stories as an overdue conversation starter. Soon they got flooded with requests for a male version.

They initially dismissed the idea, assuming men wouldn’t want to write so openly about such intimate matters. But as the queries kept coming, the two editors decided a Muslim male version wasn’t that far-fetched, and given the stereotypes of Muslim men, much needed.

“So much has been said about Muslim men, we thought it was time for them to tell their own stories in their own words about what’s important to them,” said Mattu, 41.

The result is a collection of 22 stories, “Salaam, Love: American Muslim Men on Love, Sex, and Intimacy,” to be released next week by Beacon Press. The writers from diverse racial and ethnic backgrounds, hold beliefs that range from secular to orthodox, and include straight, gay, single, married, and widowed men. The editors received more than 100 submissions over five months.

“What surprised us was how many men were willing to share their stories and be vulnerable and talk about their feelings and emotions and love, and all of these topics we don’t necessarily associate with men or think that men would want to talk about,” said Maznavi, 35.

In February, the authors will read from the new collection at bookstores in Boston, New York, Los Angeles, San Francisco, Chicago, Atlanta, Philadelphia and Washington D.C.

“Salaam, Love” seeks to counter stereotypes of Muslim men by offering stories of men who bare their emotions, admit mistakes, bask in memories of true love, recall heartbreaks, and reflect on caring for a dying wife.

The stories range from humorous to heartbreaking, while shedding light on who makes up Muslim Americans.

Sam Pierstorff’s opening chapter, “Soda Bottles and Zebra Skins,” takes the reader on a journey that starts with puppy love, veers into frank tales of teenage lust, and ends in courtship and true love.

“I definitely jumped at the chance to write about anything that connects me to my cultural background,” said Pierstorff, a writing professor at Modesto Junior College in California whose mother was a Muslim Syrian.

While the story has a few Arabic expressions and other elements that Muslims might identify, it’s about experiences that are familiar to Muslims and non-Muslims: the thrill of a first kiss; the guilt of desire; the joy of devotion.

The other stories follow suit, exploring various matters of the heart, couched in Muslim culture but ultimately dealing with topics of universal interest.

Ramy Eletreby, the gay son of the chairman of a California mosque, recounts in sad detail being a passive youngster tormented by guilt over his sexual orientation in an essay titled “The Ride.”

The editors acknowledge that the image of Muslim men isn’t helped by news coming out of many parts of the Muslim world. In the Maldives, the president recently blocked a law prohibiting marital rape; in Saudi Arabia, women are not allowed to drive or go out in public unaccompanied by a male relative.

“We believe those stories are the exception to the norm in all communities and the men in this collection are tackling difficult issues, racism, homophobia, infidelity, issues that are impacting their lives and they’re telling stories they feel are reflective of their lives,” the editors wrote.

The two books have made the editors and writers realize that more open and frank conversations about love, sex, and relationships would be healthy for the community.

“I don’t recall ever having a conversation with my Muslim friends about sex, virginity, who’s been going out with whom,” said Pierstorff.

Looking back, he said, he wishes he and his friends had talked about these topics more often.

“They’re real conversation starters,” said Pierstorff.  “What’s wonderful about this book and the previous book is you get to hear stories about all these Muslims who reveal all these stories, and you feel less alone.”

Previous A Catholic schoolteacher takes on a new role: activist
Next Pagan parenting 101