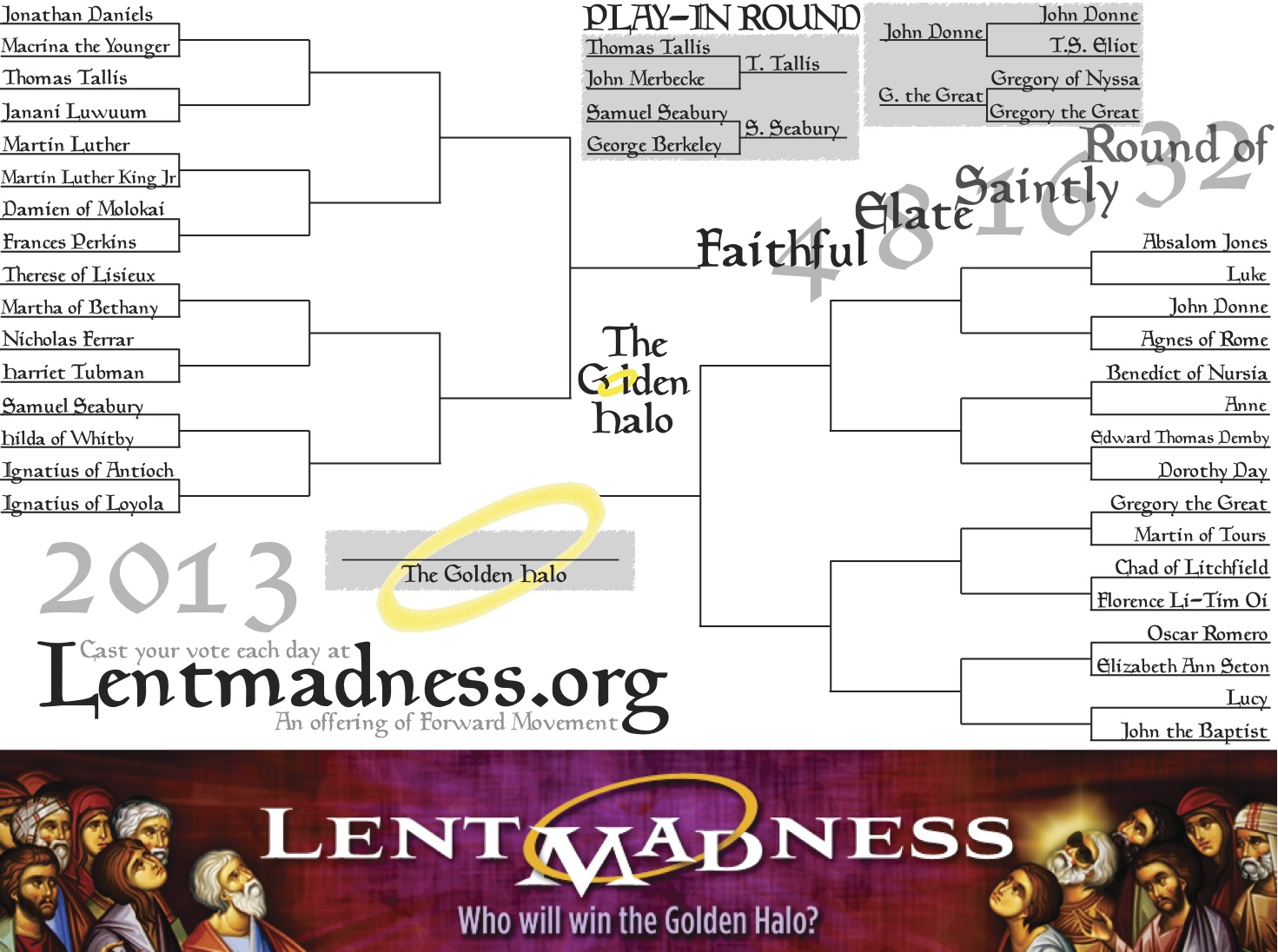 Today is Ash Wednesday, and Christians across the country know that it signals the start of … Lent Madness?

Yes, Ash Wednesday more importantly marks the start of Lent, the period of fasting and penance that precedes Easter. But it also leads into Thursday’s opening round of the fourth annual Lent Madness, a unique event that puts a spin on America’s obsession with March’s NCAA basketball tournament by blending an sincere appreciation for holiness with a wry sense of humor.

Created by two Episcopal priests, the Rev. Tim Schenck and the Rev. Scott Gunn, Lent Madness began in 2010 with “brackets” pitting one saint against another. Fans cast their votes online and the winning saints move up to the next round. Losers pack up their sandals and cloaks and head home.

“This is the most anticipated Lent Madness in the history of Lent,” said Schenck, rector of St. John the Evangelist Episcopal Church in Hingham, Mass. His partner in the Madness, Gunn, is on staff at the Episcopal Church’s Forward Movement ministry in Cincinnati.Last year the “saintly smackdown” drew nearly 50,000 visitors to the tournament website as Mary Magdalene rose through the Saintly 16, the Elate 8, and the Faithful 4 brackets, defeating John Huss, Joan of Arc and Monnica, mother of Augustine of Hippo, along the way.

In the championship round, Mary Magdalene bested underdog saint Emma of Hawaii to capture the coveted “Golden Halo.”

“Who would have ever thought that Emma of Hawaii would have gotten to the finals?” Schenck said. “It’s Lent Madness for a reason – we really don’t know how this is going to turn out. I stopped even predicting, because I frankly have no idea.”

The contest has been written about in Sports Illustrated, USA Today, and the Washington Post, and participants this year include the Episcopal dioceses of Arizona, Newark, N.J., Lexington, Ky., Texas, and Washington.

“We’re back and bigger than ever,” Schenck said in an interview Tuesday. “It’s pretty amazing how this thing has taken off, it really is. There’s just a hunger for a faith-based experience that doesn’t take itself too seriously. We take faith seriously, but we don’t have to take ourselves too seriously.”

One of the more serious sides of Lent Madness is the goal to inspire people to learn about the saints. Every bracket on the website includes biographies of the competitors so that readers can cast an informed vote.

Not everyone on the list has been officially canonized, but everyone in Lent Madness is known for their holiness.

“The Episcopal Church really understands that we are all saints in the wider sense of being saints, as people that follow Christ,” Schenck said. “There are some who are official saints, like obviously John the Baptist is one of those saints with a big ‘S.’ But we also commemorate people on the Episcopal Church calendar who are people we might not call big ‘S’ saints but who have led exemplary lives in following Jesus. And so we include those people as well.”

Thus, this year’s Lent Madness matchups include smackdowns between Martin Luther and Martin Luther King, Jr., and Edward Thomas Demby vs. Dorothy Day. It also includes “The Battle of the Iggies” — Ignatius of Antioch against Ignatius of Loyola.

“We had a little fun,” Schenck said.

Some of the more obscure competitors in this year’s tournament include Macrina the Younger, Janani Luwuum and Florence Li-Tim Oi.

“That’s part of the fun,” Schenck said. “People really get to know people who have been incredibly inspirational in their own day and in their own time, but we’ve never heard of them.”

The tournament is used by many church groups for Christian education.

“Sunday schools are using it. A lot of youth groups are using it. My own parish – and I’m not alone in this – is using it as an adult education opportunity,” Schenck said.

Like March Madness office pools, some groups are taking donations for bracket sheets and giving the money to charity.

Giving to charity is fine, but Schenck said he doesn’t want to see Lent Madness turn into a gambling event. “I don’t think there are lines in Vegas yet on the Golden Halo winner,” he said.

Organizers added “play-in” rounds this year, like the NCAA March Madness contest in which competitors vie in preliminary rounds to qualify for the brackets. One play-in round was dubbed the “poetry smackdown” with John Dunne defeating T.S. Eliot. In another play-in, Pope Gregory the Great ousted Gregory of Nyssa.

What is Schenck’s process for choosing the saints who make it into Lent Madness?

“I always try to get a balance of saints that are biblical and modern and ecclesiastical and so I like to have a nice range and diversity, with gender balance and racial balance,” Schenck said. “So I take all of this into the mix. And I don’t put in folks from last year. So Mary Magdalene won’t be defending her crown, so to speak.”

Voting starts Thursday (Feb. 14) so as not to encroach on the solemnity of Ash Wednesday, and it concludes on what is known as Spy Wednesday – the day before Maundy Thursday during Holy Week — again timed to not interfere with the holiest days of Lent.

“We have some decorum here,” Schenck said. “We want to make sure the focus goes where it needs to go.”

He said it was interesting that Pope Benedict XVI announced he will resign Feb. 28, during the first round of Lent Madness.

“It’s not confirmed that the Pope is retiring simply so he can advocate for Gregory the Great for Lent Madness,” Schenck said. “But who knows?”