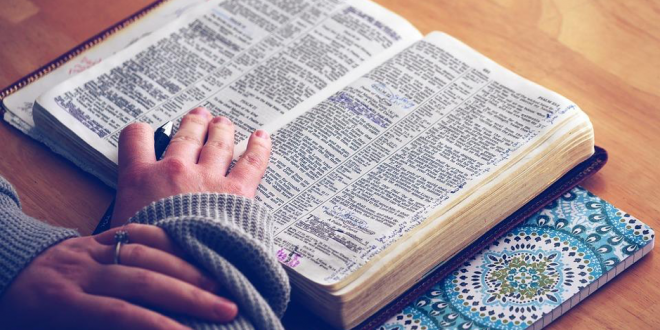 Sacred Texts: The word of God made me alive

Sacred Texts: The word of God made me alive

I vividly remember being nearly 16 years old, sitting cross legged on my futon bed with a borrowed Bible open on my lap. The person who lent it to me suggested that I read it beginning with the Gospel of John. At that point in my life I was open to considering that there could be some merit to Christianity, but I opened the book expecting it to be full of contradictions, archaic and irrelevant.

The church I belong to now speaks often of the inerrancy of Scripture and the sufficiency of Scripture. Reformed Baptist theology makes much of the Bible. It is sometimes unclear if we are worshiping God or His Word, and many congregants would say they’re one in the same. I’m not sold on that, primarily because I read it in English and not its original language. So, while I trust the sovereignty of God to ensure no “uh-ohs” in translation, I cannot fathom squiggles on a page being synonymous with Almighty God.

I do know that I would still be looking for that “foundational meaning maker” if I had not been lent a Bible. I trust what it says because in reading those words I came alive. I came kicking and screaming, but most certainly alive. I do not credit words on a page for this, but I do know who the author must be for those words to have power enough to take a skeptical anti-Christian and make her a lover of God.

I have found no other text that holds a candle to the power I have found in the Bible. I’ve read great books that have helped me immensely, but only one that I can turn to its wisdom daily and still find it challenging me and encouraging me.

I think this power has been abused. I think all power has the potential to be abused. I pray for the people who misuse Scripture even in “small” ways (quotes because there is no small sin) to justify dishonesty, bigotry and slander. I pray especially for those who teach others to misuse it because they must answer for that.

We are all frail humans on this earth and all easily led astray. Perhaps the biggest lie of our time is that there could possibly be anyone incapable of egregious wrongs. We are all deeply flawed and in need of a savior. I believe with my entire being that the various literary genres in the Bible are all, in their own way, perfect, and together, or in pieces, they speak of the one who inspired them. And somehow, through those words, the word comes to meet us when our hearts are ready.

Sacred Texts: The word of God made me alive – spokanefavs.com – Bold News