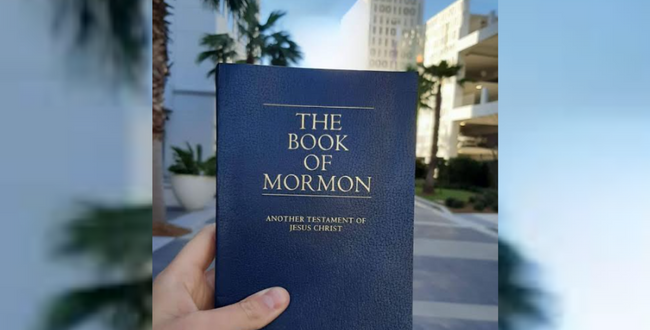 Photo contributed by Ruth Patterson, the author's niece, while serving her mission in Orlando

Sacred Texts: The Book of Mormon, Keystone of My Religion

Sacred Texts: The Book of Mormon, Keystone of My Religion

You may have heard of the Book of Mormon, Another Testament of Jesus Christ, but do you know about the central role it plays in the lives of the members of The Church of Jesus Christ of Latter-day Saints or about its divine origins?

How is it the keystone of my religion?

The Book of Mormon is key to the testimony of members. It contains the pure doctrine of Christ, and its purpose is to invite all to come unto him.

It is a volume of holy scripture comparable to the Bible. It is a record of God’s dealings with ancient inhabitants of the Americas and contains the fulness of the everlasting gospel.

The book was written by many ancient prophets by the spirit of prophecy and revelation. Their words, written on gold plates, were quoted and abridged by a prophet-historian named Mormon. The record gives an account of two great civilizations. One came from Jerusalem in 600 B.C. and afterward separated into two nations, known as the Nephites and the Lamanites. The other came much earlier when the Lord confounded the tongues at the Tower of Babel. This group is known as the Jaredites. After thousands of years, all were destroyed except the Lamanites, and they are among the ancestors of the American Indians.

The crowning event recorded in the Book of Mormon is the personal ministry of the Lord Jesus Christ among the Nephites soon after his resurrection. It puts forth the doctrines of the gospel, outlines the plan of salvation and tells men what they must do to gain peace in this life and eternal salvation in the life to come.

Key to the message of the book is its repeated focus on the Savior, Jesus Christ. We read of his divine mission, his ministry, his doctrine and his everlasting atonement. We learn that all who come unto him may be saved.

How did we get the Book of Mormon?

Joseph Smith, the prophet of the restoration, translated, through divine guidance, the ancient record, written on golden plates. The various authors were prophets who spanned a period of years beginning around 600 B.C. and ending in A.D. 421 in the Americas.

The plates were given to Smith by an angel named Moroni. He first appeared to Smith in 1823 and told him about the record and where it was hidden. After four years of preparation from Moroni’s first visit, Smith was finally directed to take the records from their hiding place on the Hill Cumorah in upstate New York and begin the process of translation. The first edition was published in 1830, just before the church was organized in Palmyra, N.Y., by Smith.

Does it replace the Bible?

The Book of Mormon is a treasured book of scripture to members of the faith, who consider it to be a second witness of the Savior; the Holy Bible being the first. It is a perfect companion to the Bible, which members also cherish and follow. It does not replace the Bible in any way.

Concerning this record Smith said: “I told the brethren that the Book of Mormon was the most correct of any book on earth, and the keystone of our religion, and a man would get nearer to God by abiding by its precepts, than by any other book.”

And so, members and missionaries alike are excited to share the Book of Mormon with all who will receive it.

Jennifer was born and raised in Spokane and is one of nine children. She graduated with a BA in music from EWU and plays the piano, violin and organ. She taught private music lessons and worked in non-profit fundraising including serving as director of development for the Spokane Symphony. She left Spokane for 14 years and lived in Hawaii, Italy, Maryland, and Greece. She has been a lifelong member of The Church of Jesus Christ of Latter-day Saints and is passionate about her faith.