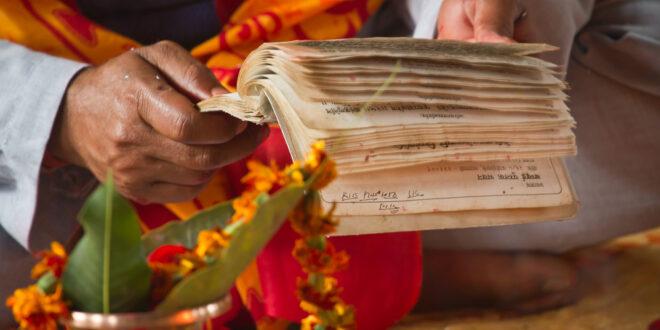 The Vedas and the Agamas are Hinduism’s revealed scriptures.

These are the oldest scriptures in the world.

The Vedas are a collection of four books: the Rig, Sama, Yagur and Atharva. Each has four sections: hymns, rites, interpretation and philosophical instruction.

Everyday priests and lay people chant from the Vedas during temple or home worship. The Vedas can be interpreted freely by anyone.

These are Hinduism’s primary and authoritative scriptures.

The Agamas are Hinduism’s secondary scriptures.

The Agamas focus on a single supreme deity, unifying each of the three major sects of Hinduism into oneness of thought. The specific doctrines and practices of day-to-day Hinduism are nowhere more fully explained than in these hymns.

Ahimsa nonviolence is the highest virtue for Hindus. It means to not bring harm to any living creature by thought, word or deed.

The law of karma and seeing the divine in all things is the basis for non-injury.

My name is Chellappa Deva. In 1968 I found the teachings of Sivaya Subramuniyaswami. He is the founder of Kauai’s Hindu Monastary, Hinduism Today International Magazine, Hindu Heritage Endowment and the author of “Dancing Living and Merging” with Siva books. I liked the teachings and have followed them ever since. I am currently helping the Spokane Hindu Temple and Cultural Center to come up.

Previous Tangled Politics and Twisted Journalism
Next Sacred Texts: Catholics and the Bible