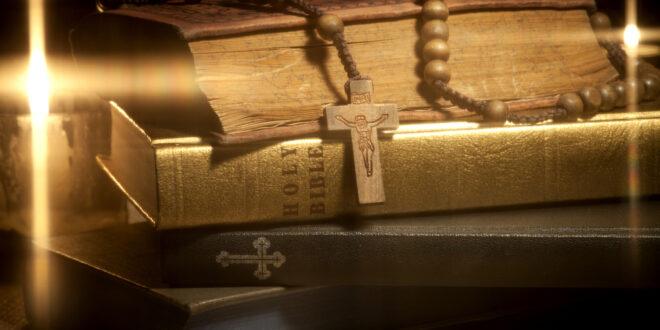 Sacred Texts: Catholics and the Bible

Sacred Texts: Catholics and the Bible

Is the story about Jesus walking on the water historical or fictional, and, either way, what is the intended theological point of this story?

What is the literary style of a particular book of the Old Testament or the Hebrew Scriptures? Is the Book of Job history or fiction?

These questions, and others like them, are part of what are called the historical-critical methods of biblical interpretation. For ordinary Catholics, those who are not trained Bible scholars, it is as important to read about the Bible as it is to read the Bible itself.

For example, it’s as important to read books, essays and commentaries about the Letter of Saint Paul to the Romans as it is to read that book itself. Otherwise, we leave ourselves open to what can be some wild and wooly interpretations of the Bible. A classic example of this is the Book of Revelation, which fundamentalist Christians often interpret in nutty ways, finding in it literal predictions about the end of the world.

One of the earliest Catholic Bible scholars was Saint Jerome (fourth century) who summed up the classic Catholic belief about the role of the Bible in Christian life. He said, “Ignorance of Scripture is ignorance of Christ.”

Protestants sometimes accuse Catholics of being ignorant about the Bible, and to some extent this may be true. However, even a Catholic who does not read the Bible daily but participates weekly in the church’s liturgy (“Mass” or “Eucharist”) is exposed to the Scriptures, for the Liturgy is heavily scriptural, from beginning to end.

Mitch Finley is the author of 30+ books on Roman Catholic theological topics and spirituality, all written to appeal to both non-academic and academic readers. Mitch holds a B.A. in Religious Studies from Santa Clara University and an M.A. in Theology from Marquette University. He and Kathy Finley have been married since 1974 and are the parents of three grown sons. To learn more visit mitchandkathyfinley.com.