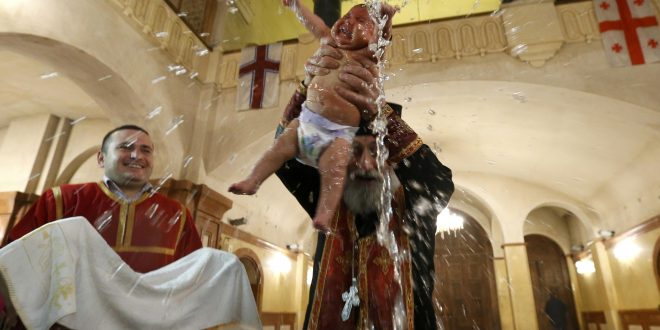 A baby is baptised during a mass baptism ceremony on Orthodox Epiphany Day at the Holy Trinity Cathedral in Tbilisi, Georgia January 19, 2017. REUTERS/David Mdzinarishvili

Hundreds of thousands of Russian Orthodox believers took a plunge into sub-zero waters across Europe on Thursday to wash off their sins as part of Epiphany feast day celebrations.

The annual Jan. 19 commemoration of the baptism of Jesus Christ in the Jordan River saw more than 150,000 people dip into several ice holes across Moscow, Tass news agency said.

Temperatures were around minus nine degrees Celsius (16F) in the Russian capital, and one child screamed as he hit the frigid water while other people reached hurriedly for towels after braving the pools.

“I advise everybody to do this. This is cool, feels like you are reborn,” Moscow resident Elena said after her plunge.

Similar icy dips took place around the country and in Kazakhstan, Ukraine and Belarus, while swimmers in Serbia and Bosnia marked the feast day by taking part in races in freezing waters.

Previous When Nietzsche Rides the Service Elevator Too: Reflecting on Cathy McMorris-Rodgers’ MLK Speech
Next What shaped King’s prophetic vision?