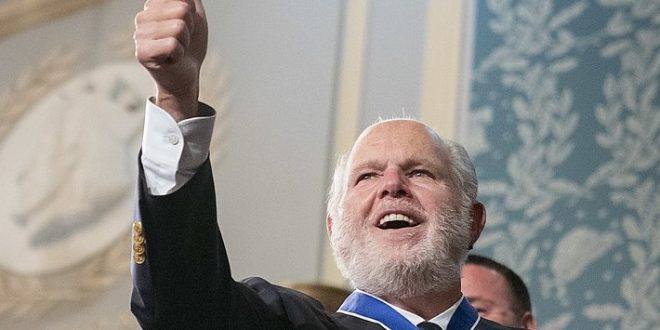 Shortly after being awarded the Presidential Medal of Freedom, Feb. 4, 2020/The White House

He was a racist, misogynist, homophobic blowhard. He was narcissistic, though maybe not so much as his favored president.

He helped shape the political ideology of tens of millions and created the environment that produced Donald Trump.

As he was dying of lung cancer, the president rewarded Rush Limbaugh with the Presidential Medal of Freedom, not surprising given the president’s debt to the right-wing media voice but still a further desecration of the medal once reserved for America’s finest until Trump cheapened the honor.

I found both extremes misplaced.

For me, Limbaugh’s death produced two immediate and unrelated reactions.

First, I was heartened to see quality obituaries in the mainstream press. The New York Times and The Washington Post both took considerable heat from the right because their obituaries were thorough – and accurate – in reporting Limbaugh’s successes and his many faults and biases. News obituaries are not written as tributes to be read at a funeral. They are news stories and the journalists who write them are bound by ethical standards that require thorough and accurate reporting. In plain language the two obits documented Limbaugh’s racism, homophobia, and misogyny.

My second reaction was one of relief. I am not at all sorry his political voice is silenced. Since his radio talk show went national in 1988, he contributed to the dumbing down of political discourse, peddling outrageous conspiracy theories, insulting, and dehumanizing those with whom he disagreed or those he simply did not like. His language ranged from abusive to corrosive. And he essentially created the broadcast environment that produced Fox News and its Limbaugh wannabes.

He particularly relished attacking former President Barack Obama, arguing Obama is not black (because his mother was white) and supporting totally discredited conspiracy theories that the former president was foreign born.

The terrific New York Times obituary provides a brief sampling of Limbaugh’s stunning disregard for people he did not like.

In the Limbaugh lexicon, advocates for the homeless were “compassion fascists,” women who defended abortion rights were “feminazis,” environmentalists were “tree-hugging wackos.” He called global warming a hoax and cruelly ridiculed Michael J. Fox, imitating the tremors that were a symptom of the actor’s Parkinson’s disease.

When hundreds of thousands of Americans were dying of AIDS, Mr. Limbaugh ran a regular segment called “AIDS updates,” in which he mocked the deaths of gay men by playing Dionne Warwick’s recording of the song “I’ll Never Love This Way Again.” He later expressed regret for the segment, but he continued to make homophobic remarks over the years; in 2020, he dismissed the presidential bid of Pete Buttigieg by claiming that Americans would be repelled by a “gay guy kissing his husband onstage.”

In 2012, Mr. Limbaugh lambasted Sandra Fluke, a Georgetown University law student, as a “slut” and a “prostitute” after she had testified at a congressional hearing in support of the Obama administration’s requirement that health insurance plans cover contraceptives for women.

He was still peddling outrageous conspiracy theories right to the end, arguing in his last broadcast that Donald Trump had won the 2020 election and that Joe Biden’s victory was illegitimate.

But it is never right to wish death on another person or celebrate their loss to a deadly and painful disease. If Limbaugh had been running for office, I would happily have voted him out. But he was fighting lung cancer and all of us should have some sympathy for that struggle. Something similar has or will touch all of us.

My social media feeds were full of memes that suggested Limbaugh would burn in hell or suggested he is paving the way for other hated political figures, or paraphrased “ding, dong, the witch is dead” to say something altogether more offensive.

With apologies to those who may have contributed to those expressions of glee, I find in them a singular lack of human empathy, even if Limbaugh himself rarely showed empathy for his targets.

Admittedly, there is a difficult line here. In previous columns I have written that there can be no excuse for hate, no dialogue with haters, no quarter given racists, anti-Semites, and homophobes. I believe in calling out such people at every opportunity. But advocating death in response is to align ourselves with the vile and that is a value we must not embrace.

Let Rush Limbaugh rest in peace even as his memory compels us to do far better than he.

Previous Holding on in the letting go in a pandemic: Nature’s Door
Next Inequities in How We View Homelessness, Part 2