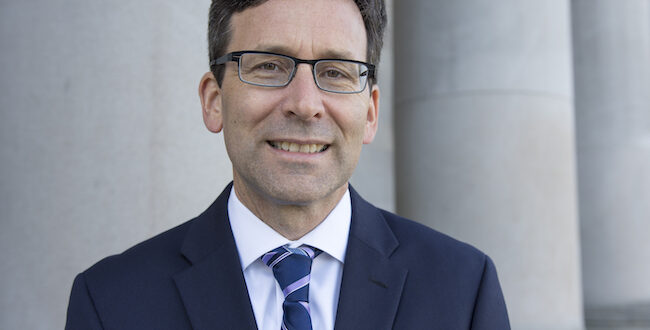 On Wednesday, Attorney General Bob Ferguson said he has a team of 20 getting ready to tackle potential ramifications of the reversal of Roe v. Wade.

In addition to the obvious impacts for providers, Washingtonians, and people traveling to the state seeking abortion care, Ferguson told a Civic Cocktail audience on Wednesday evening that attorneys in his office will also be thinking about how to deal with what may come next.

“You name it, there’s a lot of potential legal issues, so we’ve been spending a lot of time preparing for this,” he said at the event presented by Crosscut and Seattle CityClub.

Ferguson expressed concern that rolling back Roe v. Wade could throw other constitutionally protected rights into jeopardy — particularly those rooted, like Roe, in the right to privacy, the basis for legalizing birth control and striking down sodomy laws.

“That is what is so unusual, is [for] the court to roll back a right that’s ingrained in our constitution, in the right to privacy, which so many other rights derive from that right to privacy,” he said. “Once you roll that back, that has implications not just for women’s reproductive rights, which are profound, but for other rights that we frankly take for granted as well.”

While Roe v. Wade concerns abortion specifically, said Ferguson, “no Supreme Court opinion operates in a vacuum by any stretch of the imagination.” He expected challenges on other issues to follow. Overturning Roe v. Wade is “the first stop on eroding other constitutional rights,” he told the audience in person at Town Hall and online. The Civic Cocktail conversation will be broadcast on KCTS-9 on Wednesday, June 29, at 7 p.m.

Although the erosion of other rights might seem extreme in Washington, which this year passed legislation expanding abortion access, it’s impossible to know what form future legal challenges could take.

Ideology and the political divide have already disrupted access to health care for many, including in Washington state. Ferguson said he has taken an active role in helping other states advocate for these rights by writing briefs in other cases that do not directly affect Washington at this time.

While Ferguson, along with Gov. Jay Inslee, have previously spoken in support of a state constitutional amendment codifying abortion rights in Washington, Ferguson seemed to distance himself from that idea in Wednesday’s conversation. He still spoke of it in favorable terms, but suggested that it might not even be necessary, depending on one’s reading of the state constitution.

Although the concept hasn’t been tested in the courts, Ferguson said the state’s constitutional privacy protections could be interpreted to include abortion rights. Of the proposed constitutional amendment, he said, “I want to be clear: I’m not minimizing that effort… I just think in the short term I’m not sure how practical it is, and No. 2, I think it’s entirely possible that right is in our state constitution,” he said.

In a worst-case scenario, according to Ferguson, Congress could compound the impact of reversing Roe by passing legislation outlawing abortion nationwide, a stated policy goal of anti-abortion activists and Republican members of Congress. If that were to happen, his office would do “everything in our power to uphold the will of the voters” in legal battles pitting state policy against the federal government.

If the balance of power were to change in Congress, said Ferguson, it would open the door to that type of federal policy.

The next Civic Cocktail event will take place on July 13.

Previous SCOTUS puts government back in the business of funding religious education
Next Some Celebrate, Some Vow to Fight Back: Spokane Responds to Reversal of Roe V. Wade