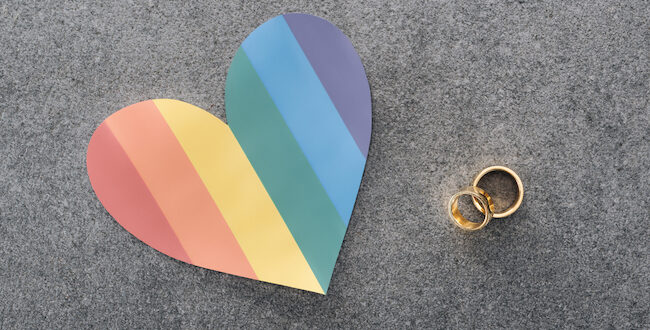 Graphic of Pride rainbow and rings/DepositPhoto

The news broke just as my dear Carla and I were starting a short vacation.

We were driving to visit our best friends in Portland when the bulletin moved – the U.S. Supreme Court had rescinded Roe v. Wade, instantly eliminating a woman’s Constitutional right to an abortion.

The decision announced Friday was expected. A draft decision had been leaked in May. I wrote about it in a May 10 column. I said at the time anyone thinking the draft would be anything other than the final decision was living in a dreamworld. Now we know, not a dream, but a nightmare.

We were visiting Margaret Witt and her wife, Laurie Johnson. Those names should be familiar to people in Spokane.

Witt is the former Air Force major whose dismissal from the service was reversed by a federal court, contributing directly to the end of the military’s “don’t ask, don’t tell” policy. She and Johnson, now living in Portland, were the second gay couple in Washington state to receive a marriage license when same-sex marriage was approved by Washington voters.

We found both Witt and Johnson deeply depressed by the day’s events. As a woman and a retired nurse, Witt knows better than most what an end to abortion rights at the federal level means for women who might seek the procedure but lack the means to travel to states where the abortion remains legal.

The threat to those rights is now very real.

The opinion striking down Roe is based on an over-strict interpretation of the Constitution often offered by conservatives as the rationale for rolling back civil rights.

The Constitution does not specifically mention same-sex marriage, consensual gay sexual activity, mandatory provision of contraceptive services by employers, or even the right of couples to marry when partners are of different races.

Sure enough, in his opinion affirming the court majority decision, Justice Clarence Thomas said it is time for the court to go after gay marriage, gay sexual activity, and use of contraceptives by married people to reverse decisions he says were similarly erroneous.

Thomas, long rumored to be considering retirement, will almost certainly stick around long enough to pursue his ambitions.

True, in his affirming opinion, Justice Brett Kavanaugh said nothing in the Roe decision should lead people to believe other rights are in jeopardy. On the other hand, during his confirmation hearings in August 2018, Kavanaugh assured Maine Sen. Susan Collins he would not “rock the boat” by rescinding Roe. We know now that assurance was, essentially, a lie to help secure his nomination.

The issue of abortion rights is returned to the states. Washington and Oregon have embedded those rights in state law.

It is likely that same-sex marriage, provision of contraception services, and approval of gay sexual activity would be similarly protected in blue states.

But if gay marriage were to be outlawed at the federal level, people like Witt and her wife would be put in a terrible position. Federal benefits such as Social Security, Witt’s military pension, and federal insurance would no longer be transferable to her spouse. IRS provisions allowing same-sex couples to file jointly would evaporate.

As with Roe, the nation would return to a time when large segments of the population were treated differently because of who they are.

There should be no confusion on this point. The forces behind the decision to rescind Roe are set on eliminating those other rights, too. The agenda is not a secret. And with the Trump-packed court in place for years, maybe decades to come, there is no reason for optimism.

It was reported Friday that former President Trump told advisers the decision to rescind Roe could hurt Republicans in the upcoming midterm elections. That might be true, I suppose, if those outraged by the court decision mount a massive election effort. But in the end, it will not matter what happens at the polls. It will take just one state, one neofascist governor – see Ron DeSantis of Florida – to mount a challenge that reaches the Supreme Court. And that is all that will be required to set us back.

So, there was despair in the Witt/Johnson household on our arrival Friday.

In conversation, we looked desperately for some cause for optimism. We could find none.

Most Americans have been born into a world where certain fundamental rights were guaranteed. Those rights are in jeopardy and those too young to remember may soon experience a new America. A new American dark age.