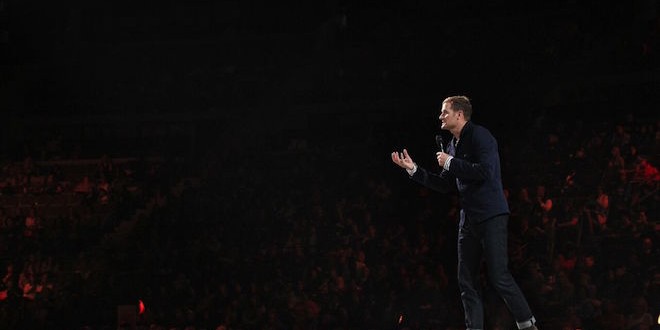 Rob Bell — once a poster child for evangelicals — will be passing through Spokane on Friday to discuss faith and science, which he says are long lost dance partners.

Bell is the founder of Mars Hill Church, one of the fastest growing megachurches in the country. He’s also the author of “Love Wins,” the best selling book in which he challenges traditional Christian views of heaven and hell. TIME magazine said the book ignited a “new holy war” which Bell said later prompted him to leave Mars Hill in search of a more forgiving faith.

Similar to his 2006 Everything is Spiritual Tour, Bell takes the stage with only a marker and whiteboard and maps out his views on spirituality – this time focusing on how science and the cosmos tie to humanity. His talks are not held in churches, but in concert halls, venues like the House of Blues in Boston, the Regent in Los Angeles and the Knitting Factory in Spokane.

“We all have a sense from time to time that there’s something more going on here, and wonder what we’re doing here and where it’s headed,” he said. “Institutions have been formed to wrestle with this question, but have often narrowed the search instead of opening it up.”

He starts his presentation with The Big Bang Theory.

He said the tour is a way to create space so that people can, “be blown away all over again with the fact that we’re all on this hurtling ball of debris racing through space.”

However, for many science and religion are in conflict.

Victor Stenger, for example, author of “God and the Folly of Faith” writes that the two are irreconcilable because faith doesn’t require evidence, and says science contradicts that belief.

“Our early reptilian limbic response helped us run from predators. It kept us alive. But the problem is that it often rises up, fills us with adrenaline, gives us sweaty palms and sends us running for the isle when there isn’t as much of a threat as there appears to be,” he said.

He said not having a spiritual discussion centered around science — particularly human consciousness — is absurd.

“In the 13th billion year of the universe humans begin reflecting on their own existence. Rocks weren’t forming book clubs, dinosaurs weren’t saying ‘life has no meaning,’ but for some reason the human brain, mind and soul developed and started contemplating longing, hope, desire, despair,” Bell said.

His tour also addresses evidence that the universe is expanding, and how that relates to “the moments when you were moving beyond yourself.” He described it as a science of the soul.

That’s the heart of the human existence, he said, and it’s mysterious.

Some have said Bell’s ideas coincide with mysticism, which he said he’s OK with.

“I love that word. It refers to an unmediated experience of the divine. All doctrine and dogma began with mysticism. Somebody had an ‘aha moment’ and tried to give it language,” he said.

So far his tour has drawn young and old and people from various faiths, because, Bell said, most people “hunger for the big thing.”

The Everything is Spiritual Tour will be Friday at 8:30 p.m. at the Knitting Factory, 919 W. Sprague Ave. Tickets are $29.50 for general seating, or $101.50 for a VIP meet and greet before the presentation, which includes a signed copy of Bell’s latest book, “The ZimZum of Love: A New Way of Understanding Marriage.”

Previous Cecil, mob mentality, and the fallen world
Next Ask a Buddhist: What is the value of recitations?

Wow, Thanks for the heads up T.