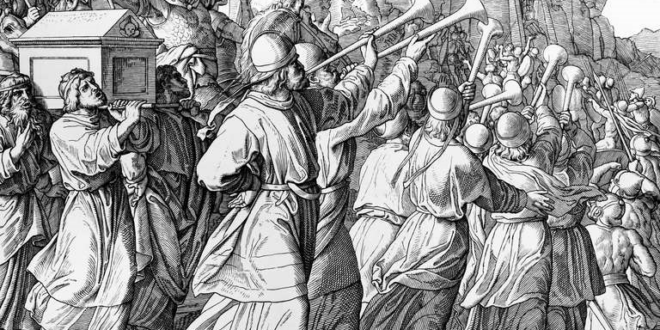 Today, the story of the battle at Jericho stands as a reminder of God’s might and our hope for overcoming adversity and oppression. Ancient Israelites faced oppression on many sides, having fled from slavery in Egypt only a generation earlier and having practices and beliefs notably different from their neighbors’. When Christians today read the first six chapters of the book of Joshua, we hear a promise of protection against oppressors from God. This story acts as encouragement for those who are at the mercy of those with all the power, as a beacon of hope that someday the playing field may be leveled, as an indulgence in the possibility of tables being turned.

The thing is, white, well-off, Christians in the West cannot relate to the Israelites as they marched around the city walls. Christians like me do not face religious or cultural or racial oppression. When I envision myself as the Israelites in Joshua, the story takes on a colonialist flavor. It is no longer a story of hope and promise, but of domination and violence.

I am not an Israelite. I am a Canaanite.

I live comfortably in Jericho and do not want to share my land and resources. I am complicit in Egypt’s enslavement of another people group because I benefit from the bricks they labor to make in the hot sun. In this story, my walls are the ones that come tumbling down by the power of God.

Over the past couple weeks, we have seen riots erupt across America. Windows have been smashed, cars have been burned, stores have been looted, walls have come tumbling down. I do not write here to make a case for or against rioting as a way of working toward social change. In fact, much of the rioting has been performed by people with power and not connected to the Black Lives Matter movement. But these riots do act as evidence that our country is broken. It is not a brick or a Molotov cocktail that is the weapon of our destruction, but inequality, power differentials, unequal access to opportunity, racism.

When white folks colonize and dominate bodies of color, and black bodies in particular, we are acting violently. A white knee on a black neck, a threat to report black skin to the police, an unannounced and lethal raid in a black home, leadership’s refusal to legally protect black bodies from lynching – these are the weapons of our country’s destruction. And when we have taken these weapons to the people of America, it is our own fault when Jericho falls.

“The scandal is that the gospel means liberation, that this liberation comes to the poor, and that it gives them the strength and the courage to break the conditions of servitude.” – James Cone

Previous Saying Hello: The New Kid on the Block
Next “This Time It’s Different” — Pastor Hopeful About Impact of Protests