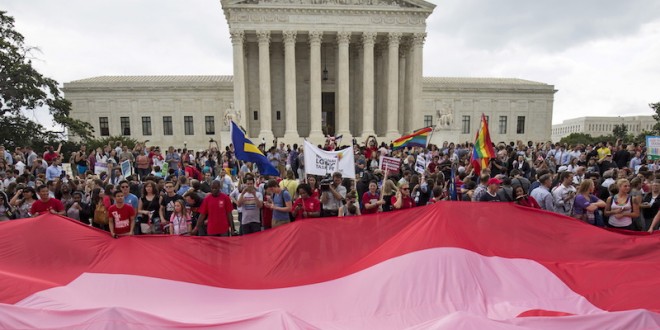 Supporters of gay marriage rally after the U.S. Supreme Court ruled on Friday that the U.S. Constitution provides same-sex couples the right to marry at the Supreme Court in Washington June 26, 2015. The court ruled 5-4 that the Constitution's guarantees of due process and equal protection under the law mean that states cannot ban same-sex marriages. With the ruling, gay marriage will become legal in all 50 states. REUTERS/Joshua Roberts - RTX1HY6S

(RNS) Some hailed the Supreme Court’s decision as righteous and holy.

Others deplored it as an affront to God.

Religious leaders around the world — and secular leaders who invoked their faith — reacted Friday (June 27) to the court’s ruling that same-sex marriage is a constitutional right.  Here is a sampling of what they said.

“I know that Americans of good will continue to hold a wide range of views on this issue. Opposition in some cases has been based on sincere and deeply held beliefs. All of us who welcome today’s news should be mindful of that fact; recognize different viewpoints; revere our deep commitment to religious freedom.

“Those who claim that same-sex marriage threatens the sanctity of heterosexual marriage neglect the history of the institution’s evolution both within the scriptures and over time. Sexual orientation is an essential component of human identity, and God loves and accepts all people made in God’s image.”

“Just as Roe v. Wade did not settle the question of abortion over 40 years ago, Obergefell v. Hodges does not settle the question of marriage today. Neither decision is rooted in the truth, and as a result, both will eventually fail. Today the Court is wrong again. It is profoundly immoral and unjust for the government to declare that two people of the same sex can constitute a marriage.”

“Though the Supreme Court ruling this morning changed the law of the land, there is still progress to be made in changing the hearts and minds of evangelicals who disagree with civil marriage equality. This progress can only be made when compassionate, respectful dialogue is encouraged within communities of faith.”

The Church of Jesus Christ of Latter-day Saints:

“As Jews, we believe we are all formed in God’s image. This compels us to extend and recognize the same rights to everyone in our community, including individuals who identify as straight, gay, lesbian, or transgender. For many years, Reform Judaism rabbis have called for equal rights for all members of our communities, and we see today’s Supreme Court decision on marriage equality as a huge moral victory for the United States.”

“We reiterate the historical position of the Jewish faith, enunciated unequivocally in our Bible, Talmud and Codes, which forbids homosexual relationships and condemns the institutionalization of such relationships as marriages. Our religion is emphatic in defining marriage as a relationship between a man and a woman. Our beliefs in this regard are unalterable.  At the same time, we note that Judaism teaches respect for others and we condemn discrimination against individuals.

Bill Donohue, The Catholic League for Religious and Civil Rights:

“For people of faith, this decision is ominous. On p. 27, the majority declares that religious Americans ‘may continue to advocate with utmost, sincere conviction that, by divine precepts, same-sex marriage should not be condoned.’ It is nice to know they respect our First Amendment right to freedom of speech.”

“Catholics who disagree with the Supreme Court decision should treat gays with ‘respect, compassion and sensitivity,’ as the Catechism asks.”

“Today love and the Constitution triumphed over bigotry and religious extremism,” said “That’s a great step, but no one should expect the Religious Right and its political allies to give up. They are already working to throw up as many roadblocks as possible to prevent LGBT Americans from claiming their hard-won rights.”

“Today the Supreme Court has said unequivocally what people of faith across the country have known for years: that there is no legitimate, secular reason to deny the right to marry to same-sex couples. This is a victory for marriage; this is a victory for families and children; this a victory for the love that is preached by the prophets and spiritual leaders of every faith tradition. Today’s decision is, without question, one of the most important civil rights decisions in a generation.”

“At the end of the day, I know for certain, that the moment biblical truth stands defined as hate speech in our nation, America, as we know her, will cease to exist.”