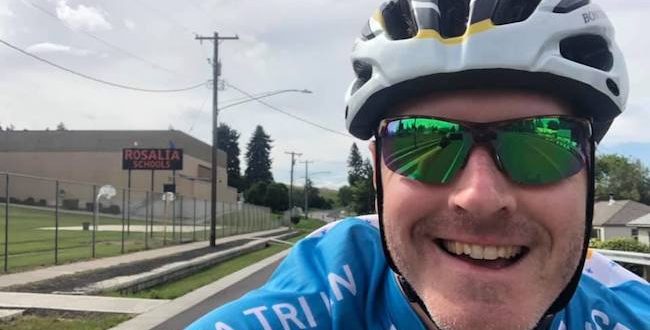 Pulling out of our cushy digs at the hotel in Kennewick, we began climbing into farming country. A long, slow and gentle ascent took transitioned us from dense, urban buildings to open, rural spaces. I started in the same small group of four riders that got me through the last day and a half, and we climbed up some of the easiest grades of the week. And I didn’t think I was going to make it.

Day 4 was century day, when we attempted 100 miles. Riders who complete this cycling milestone carry the status of serious endurance rider. It demonstrates toughness and dedication.

The secret to centuries is that they are mental. One day after riding 96 miles (nope, doesn’t count), 100, just 4 miles more, seemed impossible. I slipped back from my first group to another, slower pack. I was beginning to count myself out. I failed to summon my usual energy, my quads were tighter and my breathing was heavier than the past three days. I contemplated what it would be like to quit. No way could I spend seven more hours in the saddle. The more I focused on my struggling, the more I struggled.

Finally, we hit our first snack stop 20 miles in. Snack stops boost your energy, but also your morale. The chance to stand up and rest while debriefing the last stretch is a relief, and knowing you’re one step closer is exciting. Rest stops were almost all run by volunteers on STK, and this was a good one. There were hard-boiled eggs (pre-peeled!), oranges (pre-quartered!), and string cheese (string cheese!). It lifted my spirits and my blood sugar level.

Pulling out of the rest stop with my original compatriots, I felt restored. The pedals turned easier and I envisioned myself finishing the day. We remarked on the beautiful scenery and laughed together.

One unavoidable difference between my ride and the journey of a refugee is that I’m sure I’m going to get home. But I’m not certain I’m going to complete the whole ride. When a refugee leaves home, they have no guarantee they will make it. They have no destination in mind other than safety. When you run for your life, the possibility of losing it must seem very real.

We all have immigrant stories, but my wife’s is a little bit closer than mine. Her Serbian grandmother was born in the United States, but several of her older siblings were not, so she maintained a strong Serbian identity. She faithfully attended her Serbian Orthodox Church in Butte, Montana and talked about “the old country.” She also kept up correspondence with family back there.

When the war broke out in the Balkans in the mid-1990s, she permanently lost touch with many of them, distant relatives of my own by marriage. I’m sure some of them died running from the conflict. I wonder if any survived but never recovered their Rolodexes. I wonder if any survived and simply hid, never re-establishing contact for fear that they still might be found and killed.

#firstworldproblems have become cultural cliché, but it’s a privilege that we live safe lives in America. When we begin journeys, we take for granted we can complete them. The STK helps us shed that privilege, even temporarily, to consider what it might be like to run from home, unsure if you’ll ever make it back alive.

I began the final day of STK energized. I have summited Chinook Pass and completed a century — the two biggest feats of the ride. Anything I did today would be easier, and there would be a shower in my own house and the chance to sleep in my own bed at the end.

Unlike Day 4, I started with a burst of energy. The chilly Palouse morning motivated me to warm up, and the rolling Palouse hills promised me some fun riding. On clear 6 a.m. roads, I pushed myself hard up repeating hills while enjoying the downhills that came after.

I pulled in to our first snack stop, St. John, before most people were up for church. Eating an apple in the town park, I looked at the houses where locals lived, unaware of this disturbance in their Sunday morning quiet. Continuing to feel strong, I pulled out of St. John and began pulling away from my normal riding group, curious about whom I could catch.

Miles down the road after a long, hard solo push through the thickening pine forest, I found the back wheels of a strong group of riders. This was the fun group that synced their phones to multiple Bluetooth speakers strapped to riders bikes and cruised to dance music in stereo. We passed through Malden together, saddened to see that the convenience store that carried ice cream bars last year had closed.

As we approached our lunch stop in Plaza, we took a hard left through Rosalia. The thriving Palouse community has a picturesque downtown and charming signs, like the one as you leave town that says “We’re glad you came.” In Plaza, little more than a few houses surrounding a grain silo, we enjoyed lunch in the front lawn of the taxidermy store. The taxidermist, who was not there, allowed us to use his bathroom.

Yesterday, we passed through more of the iconic small towns that give Eastern Washington its flare. Kahlotus, with its Farmers Daughter Café. Washtucna, with its prominent Lions Club. Lacrosse with its town fair that we crashed for a snack break. And Endicott, with its silo-dominated downtown and hospitality that kept us fed, sheltered showered.

As we passed through each small town, I recalled stories my own refugee friends and clients told me and that I read in second-hand accounts. The cities in most countries tend to be the centers of power, while the outlying areas are the homes of the marginalized.

Not every refugee is rural, and plenty of them are intellectuals, artists, protesters and minorities from the city. But I thought about the military government in Naipyitaw persecuting and exterminating the Myanmar Rohingya minority. The Syrian government in Damascus bombing its minority Kurdish, Yazidi, Alawi and Druze peoples in the countryside. The South Sudanese government in Juba resurrecting Janjaweed tactics to attack its own people. The successor government to the Chavez regime in Caracas violently suppressing dissent.

God forbid, if our government fell to an autocratic dictator, experience shows that the towns I rode through today and this week would bear the brunt of oppression. Residents of small American towns live a similar life to their rural neighbors across the globe. They are independent and proud, and they keep alive the folk traditions of our country in a cosmopolitan world.

For city dwellers, these towns are treasures. We enjoy late-summer fairs with food and livestock competitions. We enjoy stopping for lunch at the café on weekend drives in the country. We eat the food they produce.