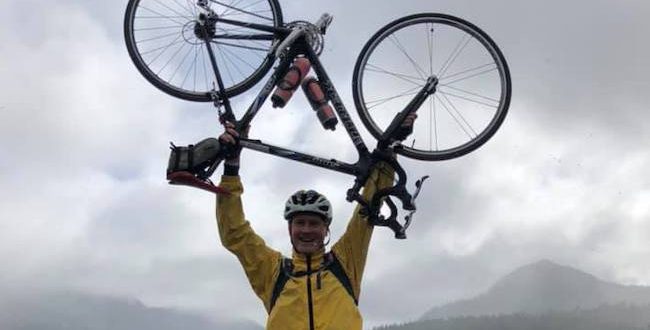 What strikes most people who begin volunteering with refugees, certainly what struck me, is how joyful they tend to be. As a group, refugees are optimistic, affable and prone to invite you to large gatherings where they give you food and treat you as an honored guest.

Folks also tend to observe how quickly refugees get on their feet. The federal program that resettles refugees requires they become financially and culturally self-sufficient within an incomprehensibly fast 90 days, and the vast majority do it.

I have often wondered where this outlook of celebration and success come from.

This morning, I reflected on that question as I attempted to summit Chinook Pass, the high point of the Sea-Tri-Kan bike route. The climb, which we began yesterday on our ride out of Enumclaw, is by all measures grueling. From our starting point today, it extends 16 miles and climbs nearly 3500 feet.

Today we contended with unusually challenging conditions. An overnight rain soaked the roads and left the air cold and raw. A very heavy mist lingered in upper-40-degree weather that soaked us within the first several miles of riding. The temperature dropped as the elevation climbed.

Over the opening 10 miles to the first snack break, the peloton sorted itself into smaller groups of riders. Leaving the snack stop, the serious climbing began. As quads began to burn and thin air became harder to breathe, riders encouraged each other. We slowed for those who fell off the back of the group. We pointed out distractions.

Several miles before the summit, there is a fork in the road; one route goes down the mountain toward the town of Paradise, and Highway 410 continues over the pass. As we rounded the left-hand turn toward the summit, snow began falling. It didn’t stick, but distinct flurries formed that thickened over the next several hundred yards.

Already dispirited, I had no lower depths of morale to sink to. Instead, I rallied. In my group, giddy laughter began.  Awe at the incredible transformation from summer to winter took hold. We began singing Christmas carols. Optimism and celebration overtook pain and discomfort. Never have I been on a ride where the mood lightened with the elevation.

The mood carried us to the summit, where the temperature read 32 degrees — literally freezing. Our muscles burned as and our feet froze. Hypothermia was a clear and present danger. Yet, we cheered.

I have frequently observed to people that the refugee experience mirrors the Resurrection. Almost universally, refugees flee their homes amid trauma. Often, they are surrounded by and threatened with death. For example, after dinner tonight Jackson Lino, a World Relief Spokane staff member and former refugee, shared with the STK riders his experience of running from home. It was during an attack on a village in South Sudan in which many people died.

Soon after the flight, refugees experience a descent into Hell, a period of waiting until they find safety or resettlement. Instead of 3 days, it lasts an average of 17 years. It is a period of being surrounded by the suffering of others in flight, waiting in refugee camps and reacting to their own traumas.

The lucky ones also experience Resurrection. When they are resettled in a safe country, find permanent refuge where they fled to or return home once a conflict cools, they begin a new life that redeems the suffering they experienced. Many use the opportunity to improve life for others by sending remittances, creating a strong family and community life or advocating for their compatriots.

In a secular or human sense, a better word for Resurrection might be resilience. As I learned on my climb today, resilience is formed through adversity. I have been afraid of the climb for several months, and until I summited today, I didn’t think I could do it.

When I encountered the flurries and dropped to my lowest point of belief and morale, I learned what lies at the bottom of my capacity: more. Of course, I knew intellectually that this is what happens when you stretch yourself, but never having truly done it, I never truly believed it.

I was rewarded for my 16-mile effort with a steady 70-mile descent into the Yakima Valley. In true Eastern Washington style, the sun came out and the temperature warmed. We even got a tailwind. By our final snack stop at Naches, 15 miles from the finish, I was stripped to shorts and jersey and slathered in sunscreen.

More deeply, I was rewarded with a strong belief that I can do great things. Today, I accomplished the greatest physical feat of my life, and when I finished I was sure I could keep going.