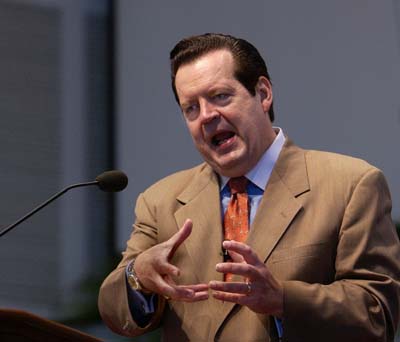 Richard Land, the Southern Baptist Convention’s top public policy ethicist, apologized Monday for failing to give proper attribution for material he used on his live radio show in which he criticized President Obama and black civil rights leaders for exploiting the Trayvon Martin shooting.

Land, the president of the SBC’s Ethics & Religious Liberty Commission, said, “On occasion I have failed to provide appropriate verbal attributions on my radio broadcast, Richard Land Live!, and for that I sincerely apologize,” in a written statement.

“I regret if anyone feels they were deceived or misled. That was not my intent nor has it ever been.”

In his radio show, Land described activists Jesse Jackson and Al Sharpton as “racial ambulance chasers” who, along with fringe groups like the Black Panthers, are fomenting a “mob mentality” in the Trayvon Martin case that is akin to what the Ku Klux Klan used to do to blacks in the South.

The plagiarism came to light when Baptist blogger and Baylor University Ph.D. student Aaron Weaver posted a partial transcript from one of Land’s shows on his blog, TheBigDaddyWeave.com. The unattributed remarks were made on Land’s March 31 show about media, race and Trayvon Martin, the unarmed black Florida teenager who was shot and killed by a neighborhood security guard.

After that discovery, Weaver listened to the third hour of the same program and discovered that Land again used unattributed material, this time from an article in “Investor’s Business Daily.” He discovered a third example in Land’s Feb. 4 show in which Land quoted from a Washington Examiner editorial.

Land said it is his practice to post the articles he uses on his website, and the show for March 31 does include a link to the Kuhner column on the “full show notes” page. Weaver called the link insufficient.

“Land made no mention of Kuhner during the segment,” Weaver said. “Listeners did not know that he was quoting Jeffrey Kuhner word for word.”

In his statement, Land explained that listeners familiar with the show understand his methods.

“While I do not use a script,” Land wrote, “listeners familiar with the program know that both the audio of the program and material I reference during the program are posted on the program’s website during or immediately following the broadcast. During the program I encourage listeners to share these links and content among their circle of influence. This has been standard operating practice for the program since its launch in 2002.”

Weaver said he suspects more examples will come to light. In an interview with The Tennessean, Weaver said “This isn’t someone stealing a few lines. It’s his whole commentary. He was so smooth doing it – it has to be something he has done in the past.”

Land concluded his statement by saying he is grateful the “oversight” was brought to his attention. “One can always do better, and I certainly pledge to do so,” he wrote.

Previous Do you think homosexuality is genetic?
Next Posting our real selves