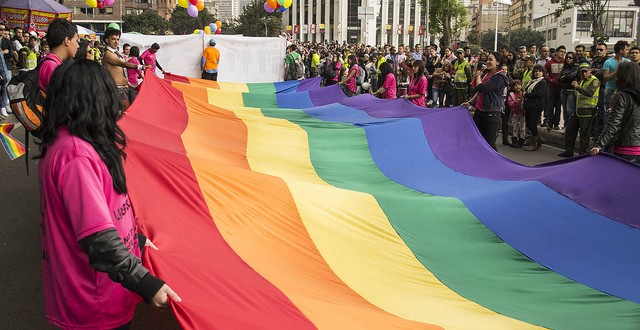 There’s a better path. We saw it taken in Utah just a few weeks ago. The state passed new religious-conscience accommodations, but they were tied to new gay-rights protections. Both sides walked away feeling more free to live according to the lights of their consciences. Both got a win and supported the outcome.

On Moody Radio and other such media outlets, hard-right Christian conservatives like Kerby Anderson are framing RFRAs as the crux of an either/or dilemma in the culture wars. Either let people practice their faith freely, or let LGBT Americans purchase cake, photography, and/or pizza from any damn merchant they please. A false dichotomy like this makes for spiky, defiant commentaries based on the premise that the U.S. is politically red and blue, not purple. But does it help us reach a workable solution that doesn’t oppress anyone?

As part of the national RFRA discussion, a Martin Luther King quote has been making the rounds:

I think there is a great difference between the two … I don’t think anybody should have the right to just come in my house that I may privately own …. But now if I turn my house into a store — if I turn it into a department store, if I turn it into a lunch counter, or anything like that — then I have certain obligations to the public beyond my particular whims … If a business is in the public market, then it cannot deny access …. [a business owner] should not have the freedom to choose his customers on the basis of race or religion.

And then, just to make matters a bit more complicated, there’s Courtney Hoffman, the lesbian business owner who donated to Indiana’s Memories Pizza, an establishment that announced it would not cater same-sex weddings. Media outlets like The Christian Post were all over this story, not least because Ms. Hoffman provided them with thoughts like this:

The gay community that we know, knows full well what it is like to be condemned by living your life according to your beliefs. The gay community that we know has fought for decades for us to be able to live our lives out and proud without fear of violence or oppression. We know so many gay individuals that fully support the freedom to live according to your beliefs and feel that extends to everyone.

More than 78 percent of Americans identify as Christian. Less than three percent of Americans identify as lesbian, gay or bisexual. I have been hearing for months about the oppression of Christians in other countries. For believing in Christ, people living elsewhere have been tortured and brutally murdered. Islamophobia and belief in a contemporary “war on Christianity” have fueled the notion that soon enough, American Christians too will be under violent attack. The problem is, simply not being cisgender or heterosexual can bring violence down on a person today, right here in Spokane. And while it is theoretically possible for a diverse, non-monolithic subset of the population like U.S. Christians to be brutally oppressed, this is a group that has strength in numbers. LGBT folks don’t — and neither do American Jews and Muslims, incidentally. What true oppression looks like is getting lost in the emotionality of the RFRA debate.

That brings to mind something else that Courtney Hoffman told The Christian Post:

“My girlfriend and I are small business owners and we think that there is a difference between operating in a public marketspace and then attaching the name of your business to a private event,” Hoffman, who runs a kettle corn stand for various festivals and carnivals, explained. “If we were asked to set up an event at an anti-gay marriage rally, we would have to decline.

Perhaps, from the standpoint of some legal experts, forcing a lesbian business owner to participate in an anti-gay marriage rally is equivalent to making a Christian business owner cater a same-sex wedding. I do know that these situations aren’t equivalent from the perspective of identity politics. If you’re gay or lesbian in America, you’re part of a small minority that still faces a wide variety of discriminatory laws and policies, not to mention violent hate crimes. If you’re Christian in America, you’re part of a powerful cultural majority that may or may not deign to acknowledge, say, the importance of Jewish holidays, or the need for LGBT advocacy. I would imagine that most LGBT folks wouldn’t want the services of a business that refuses to serve them.

For me, a key factor is that the supposed “two sides” in this debate — LGBT people and their allies, and conservative Christians and theirs — are not currently equal in political and cultural power. I also wonder why Christian businesses aren’t refusing to serve heterosexual couples who live together before marriage, or people who have been divorced, or people who take God’s name in vain. My suspicion: Many American Christians still experience same-sex marriage as having an “ick” factor that makes them uncomfortable on a gut level. All sins may be equal, but sins that give you the willies apparently demand greater legal vigilance.

Whether or not we like or acknowledge it, our personal experiences (and prejudices) affect how we read Scripture. Michigan auto shop owner Brian Klawiter recently threw his hat in the culture-war ring with the following statement, which was originally part of a Facebook post:

I would not hesitate to refuse service to an openly gay person or persons. Homosexuality is wrong, period. If you want to argue this fact with me then I will put your vehicle together with all bolts and no nuts and you can see how that works.

Klawiter has joined the growing segment of America’s population that seems to believe being male, white, and heterosexual means being oppressed. It is far easier to elicit sympathy, and Kickstarter donations, from a victimhood stance, however manufactured it may be. The reality is that LGBT Americans are the survivors of not decades but centuries of institutionalized oppression that could result in loss of one’s career, reputation, and/or life. Based on the recent wellspring of support for another discriminatory business owner, it seems that being Christian in the U.S. isn’t too hard a row to hoe. It’s important to bear this in mind before casually comparing the struggles of LGBT folks to those of American Christians.

Previous The Bible Says: Should Christians Pray in Public?
Next Maryland bishop charged in DUI death is defrocked by Episcopal Church

The last link in the story is broken, which makes me happy, because hopefully it means one less monetary windfall for a business that discriminates.

Here’s Mike Huckabee: ““We are moving rapidly toward the criminalization of Christianity.” This is such clever rhetoric. If business owners can be fined for illegal discrimination, then Christianity is criminalized. His statement is so broad that it conjures up images of people having to find underground hideouts in order to have Christian religious services. Many in the Jewish community will tell you it’ll be us, the Jews, going back into hiding to practice our faith long, long before it’ll be American Christians.

Neal, what do thing the back story is really about? It appears to be a rallying cry for an agenda not yet fully developed.

Some people have unwisely gone on the record stating that if the “war on Christianity” continues, American Christians will “rise up” in protest. The implication that such an “uprising” could be aggressive or even violent hasn’t exactly been denied. I dunno. The so-called culture war has been purely figurative up until this point. But anger toward government and courts could lead to an uptick in violence against already marginalized populations. There is often some pushback when white, straight, christian, male America is forced to share some of its power.

Well, maybe not PURELY figurative, considering lots of individual acts of violence that were politically or ideologically motivated.

If I ever start a blog, I may just call it Pastor Ick Speaks.