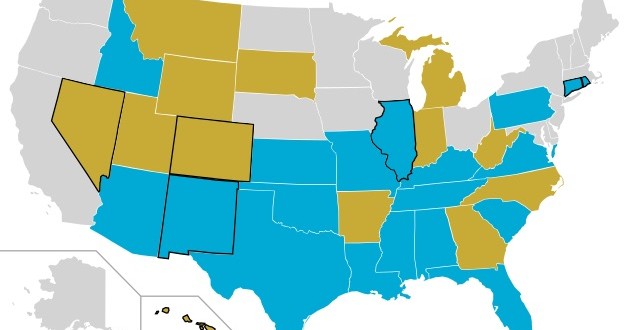 Listening to the news lately is like being transported back in time, but not in a good way. Just as America is finally inching closer to marriage equality, (c’mon, SCOTUS, don’t let us down!) states like Arkansas and North Carolina are passing, what are incorrectly termed, Religious Freedom Restoration Acts. These laws do not restore anything. Like a really bad bra, these laws “lift and separate” but only one side.

The original, federal, RFRA law which was passed in 1993, was enacted in order to protect Native American access to their sacred lands so that they could continue to practice the religious rites indigenous to their heritage. Certain Native American religious rites are tied to the very ground on which they are practiced but the federal government was encroaching onto these lands and restricting the Indians ability to practice their religion. The federal law guaranteed their rights to those holy sites, so that they were able to exercise their religion freely. These state laws take that honorable act and twist it in favor of bigotry and discrimination.

People claiming that the free exercise of their religion is impeded when they are required to sell goods and/or services to LGBT folks, are merely hiding behind the skirts of the courts in order to discriminate against those with whom they disagree. Christianity is not a religion that has rules that must be followed in order to be a “member” of the faith.

At its heart, Christianity is faith in the person of Jesus, that he was God incarnate, lived and died as a human, died on a cross and yet rose from the dead. The Gospel of John, chapter 20, verse 31 says, “But these things are written that you believe that Jesus is the Christ, the Son of God, and that by believing you may have life in His name.” (NIV) That is the Gospel, the good news of Christianity. That death is not the end, that there is more to this life than living and dying, and that Jesus is the Way to understanding the fullness of life here on earth.

Christianity is about belief and faith and life, not about laws. The apostle Paul wrote in the book of Romans, chapter 8: 1-2, “There is therefore now no condemnation for those who are in Christ Jesus. For the law of the Spirit of life in Christ Jesus has set you free from the law of sin and of death.” Jesus came to set us free from the law, and yet these so-called Christians want to take us back in time over 2,000 years to the time before our Christ came, and put us back under the law.

The real issue with these folks is that they think being gay is a sin, but that is just one very narrow interpretation of Scripture. Other issues that the church has disagreed on are slavery, intermarriage, women’s rights, corporal punishment of children, and more. Many scholars are speaking out on biblical interpretation of homosexuality including David Gushee, Matthew Vines, and Cristina Richie. Just as the racists in our not-so-distant past used the Bible to justify their bigotry, this new bigotry will be overcome through scholarship and theological advancement.

It is the nature of humankind to draw lines between people, to divide and separate, and to knock down the “other” in order to make ourselves look better. Christians are just as guilty of this as these RFRA laws prove. The nature of God is unity and wholeness and restoration. If we want to see America restored to wholeness and unity, we will rally and march, and fight to get these laws overturned. Jesus explained to his disciples exactly what following Him meant in John 15:9-17, the gist of that passage is this, “Love one another.” That’s it. Love. Now I ask you, do these RFRA laws follow THAT law?

Join SpokaneFAVS for a Coffee Talk forum on Religious Freedom Laws on May 2, 10 a.m. at Indaba Coffee/The Book Parlor. Shannon is a panelist.

Previous Vatican standoff with France tests pope’s ‘Who am I to judge?’ stance
Next Ask An Atheist: Atheism as a minority

In my opinion the the RFRA laws are an attempt by political figures to solidify a particular base of people for purposes other than their spiritual welfare. In other words a clearly blatant attempt to manipulate and propagandize feelings of victimization, separation and lose. But don’t worry the overly Red, White and Blue will save you. It has been said that patriotism and in this case religion is the last refuge of a scoundrel.