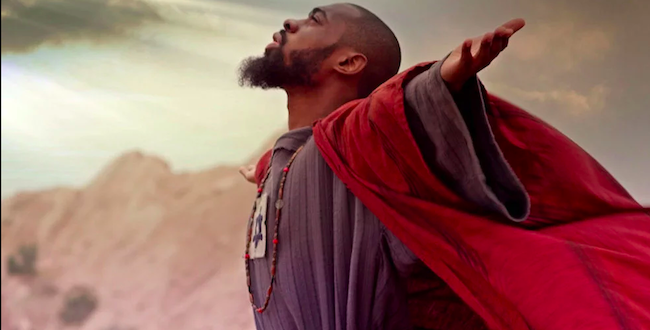 Mali Music as Jesus in a scene from the new film “Revival!” Photo courtesy of TriCoast Worldwide

WASHINGTON (RNS) — For creator Harry Lennix, the new movie “Revival!” — a retelling of the Gospel of John with a mostly black cast — is a film whose time has come.

“I think to be able to imagine yourself as somebody like Christ is a great, powerful tool that has been denied us, not necessarily even from outside sources,” said Lennix, a black writer, producer and actor in the film.

Neither John nor the other gospel writers describe Jesus’ skin color, but Lennix, in an interview just after the film’s world premiere Tuesday (Dec. 4) at the Museum of the Bible, said depicting him as a man of color is something black people often “don’t have the daring to delve into, and that’s a shame.”

The movie, which features singers Chaka Khan as Herodias, Michelle Williams as Mary Magdalen and Mali Music as Jesus, is to be released Friday (Dec. 7) in 10 cities from New York to Los Angeles. It is expected to expand to more cities in January.

Lennix, co-star of NBC’s “The Blacklist,” said the production — which mixes onstage, movie-set and technological performances — was conceived at his New Antioch Church of God in Christ in Los Angeles, with an aim to include spirituals and gospel music.

“New Antioch is made up of mostly black people,” he said of the Pentecostal congregation. “When it comes to singing that kind of music, it is vital to have the authentic voices.”

Lennix’s twin goals for the look and the sound of the movie were met in his choice for the character of Jesus. Mali Music is a Grammy-nominated gospel and R&B artist who added original songs to the movie, including “Not My Will,” sung in the Garden of Gethsemane as Jesus contemplates his pending crucifixion.

“Acting as Christ and portraying Christ is so powerful, but portraying Christ in a musical is even more because no one thinks how he would sing, what words it would be, how his voice would be,” Music said before the premiere, attended by 350 faith, business and community leaders.

In addition to Music’s and other contemporary gospel tunes, spirituals are used to accompany the story: “Down By the Riverside,” in the scene where Jesus is baptized by John the Baptist; “Oh Mary Don’t You Weep,” as Mary and Martha share a short-lived grief over the death of their brother Lazarus; and “Wade in the Water.” During the latter, dancers surround an onstage boat and use blue strips of fabric to simulate waves as Jesus walks on water.

Lennix said he chose the Gospel of John in part because it was the poetic book that included “dense imagery” that was “perfect for film,” with the wedding at Cana — where Jesus is said to have turned water into wine — and the raising of Lazarus from the dead.

The former Catholic seminary student — Lennix had considered joining the priesthood — cited Romans 8, which speaks of conforming to God’s image, as a key motivation for the people who partnered on “Revival!”

“That’s a mighty thing: ‘so that you can be conformed to look like him in his image,’ and nobody does that with us,” Lennix said of black people. “So I’ve taken the liberty.”

T’Keyah Crystal Keymáh plays Rebah, a female member of the Sanhedrin, the traditionally male tribunal of rabbis, who calls for Jesus’ death. She embraced the focus on what she called “the color correction” of the film.

“It’s not colorblind casting, in my opinion; it is correct,” said Keymáh, who was an original cast member of the sketch comedy series “In Living Color.” “The people of that time were brown so this is, to me, not a black version of something. It’s just telling of a story.”

“Revival!” is not the first time a predominantly black cast has recounted biblical stories. Playwright Langston Hughes’ “Black Nativity,” which premiered more than a half-century ago, was adapted into a 2013 movie that mostly focused on the baby Jesus, Mary and Joseph.

More than a decade ago, Lennix played a Pharisee — in the three gospels other than John — as part of an all-black cast of voices for the audio Bible “Inspired By … The Bible Experience.”

Lennix, who created his own adaptation of John’s gospel, unexpectedly joined the cast as Pontius Pilate when Scottish actor and “Braveheart” star Angus Macfadyen was not able to film his scenes because a snowstorm canceled his flight.

“It’s kind of a big part and so I had to figure out a way that somebody could know those lines,” Lennix recalled. “Since I wrote them I figured, ‘Why not?’”

Previous POEM: The mother or the egg?
Next Ask An Eastern Orthodox Christian: Was Mary the Mother of God?