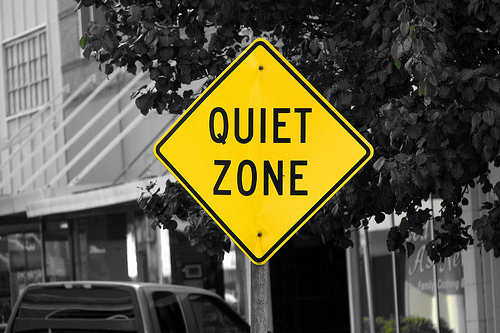 Reveling in the silence 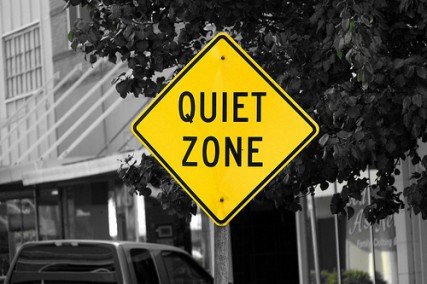 Namaste' readers. After this weekend's Coffee Talk I discovered I have something to say about silence.

I believe we are given experience of a thing so that we can hold a truth of compassion close to our thoughts and heart. To feel a better understanding. So before I begin my view of silence as a beautiful respite, the big peaceful YES, let me assure you that my experience of it has not always been that.

As a child I reveled in the noise of nature. As a teenager I could not be without the noise of my stereo. As a young adult I drew power from the noise of a growing city. But I also felt fear in the noise of raised, angry voices, of sirens, of a teacher calling on me, or of a peer speaking meanly about me. I began to seek the sanctuary of “good” noise to block out the “bad.”

It didn't really work though. It just provided an escape. Underneath the noise of a running stream, the song of a bird, the buzz of a bee, and lyrics of Depeche Mode promising to show me the world through their eyes, I was afraid. Afraid that the raised, angry voices were somehow my fault, that I would never have the correct answer, that the rumors spread about me at school might actually be true. Soon my internal voice became as critical of myself as all the external voices were. So you can probably imagine my despair when my newly found yoga practice led me to meditation.

Meditation is all about silence, listening to the quite true voice within. What began as discomfort quickly revealed itself as fear. If my true voice was critical and nasty why would I choose to spend time with it? Fear, suffering, even anger are wonderful turning point emotions. One direction is to succumb to them and fall into the depths of depression, the role of victim, or be in constant judgment of the world around you. Another is to take the energy of those emotions and grow them into the discipline and courage to change something.

At some point I felt strong enough to look at what I could control. Simply put, all I could control was me. I couldn't control the thoughts, actions or reactions of a single person in my life. I could however control mine. Let me tell you plainly, that led to the biggest fear moment yet. To be still and silent with myself, to set aside the mantra of not being good enough for anything, the freedom to give up and not matter, took guts. It had taken a lifetime to ﬁne-tune the negative noise within me. Standing up to that voice and telling it that it was an untruth was the ﬁght I had been running from my whole life.

As the critic grew quieter and quieter, the silence became bigger and bigger. No happy cheerful voice replaced it with a mantra of “you are worthy, you are loved.” It felt too big, and too important. My courage faltered, and I quit.

The fear was no longer rooted in the beliefs of other people, the fear was this silence. What if in the silence I was expected to contribute something too big? I did not feel up to the task of diving into the inﬁnite. I cried, I rebelled, ﬁnally I spoke my fears to someone I loved and trusted. I borrowed strength from them and decided to try again.In the practice of Tibetan Heart Yoga the second exercise is ten perfect breaths.

Exercise eight is the gift of stillness. Each are a practice of silence, the ﬁrst one of the thoughts and the second of the body. It is a practice of giving and receiving. You receive the gift and then you share the gift. To view silence as a gift was where I re-began.

I practiced THY daily. I took a solo camping vacation so the only voice I would hear was mine. I challenged myself, when automatically reaching for the stereo, to ask why I needed the radio on, was I hiding from something?

It took awhile, but eventually I grew comfortable with myself. I didn't need to hide the chaos of my mind in external noise. I conversed with myself when my voice got critical, I asked it questions, and when it yelled I took back control and told it to back off. Finally after years of trusting that I wasn't good enough for much, I trusted that underneath all the noise there was a beautiful silence that was truth. The silence was bliss. The silence was the space to ﬁnd the me that was intended, that was unhurt, that was loved. Perfectly and forever. It was the space of union, the absence of the false, the true home of the soul. It is what we experience when we have the patience to wait out the noise, the discipline to see it for what it is, and the courage to stand up to it. I hear others say, I don't hear God. My response is how can you? In every tradition I have explored there is a constant. Within you is a small ﬂame, light, voice, intelligence, energy. The name you give it is personal to each of us, but in the end it is just a name.

Dig beneath the protective veils that helped you survive childhood. A gift that is given to us without cost holds little personal value. But a gift that has been fought for with faced fears, heartache, tears, that we know the cost of ﬁrst hand, and we will protect it with our last breath.

In Juan Mascaro's introduction to the Upanishads he addressed the question of why. Why are we here? For the joy of creation. Why is there evil? For the joy of good arising from it. Why darkness? That light may shine the more. Why suffering? For the instruction of the soul and the joy of sacrifice. Why the inﬁnite play of creation and evolution? For Anandham, pure joy.

I liken it to capitalism or competition. I am not a fan of either. Yet without them, where would the challenge or the growth come from? We get complacent, bored, and then someone comes along who claims they can do what we do better. Ah, there is the ﬁre! From that spark we either decide it is too hard and give up, or we work for what we want. Similarly we need the suffering and the questions to hand us the discipline and courage to help make our lives full of understanding, compassion, and the will to ﬁght for the memory of wholeness.

We are not separate, but the noise drowns out the memory of that. We must be willing to do the hard work off setting aside expectation, judgment, bitterness and victimization. Instead confront your fear, roar in its face. It is blocking you from your path. It is blocking us from each other. It is separation. Silence is not empty. Silence is peace. Silence is welcomed rest. Silence is inﬁnite. Silence is our refuge. And if you listen close enough, perhaps silence is deeper than any of us could possibly fathom.

My invitation to you, to borrow the words of Depeche Mode, “Enjoy the Silence.”

Tamara Millken began practicing yoga in 2003, and teaching in 2007. She trained and is 500 hour certified through the Shambhava School of Yoga. She currently teaches Yoga for Healing, Tibetan Heart Yoga, and meditation at the Mellow Monkey Yoga Studio and the Millwood Community Center.

Previous POLL: Do you send your child to summer camp?
Next Jesuits face a shrinking pool of university presidents