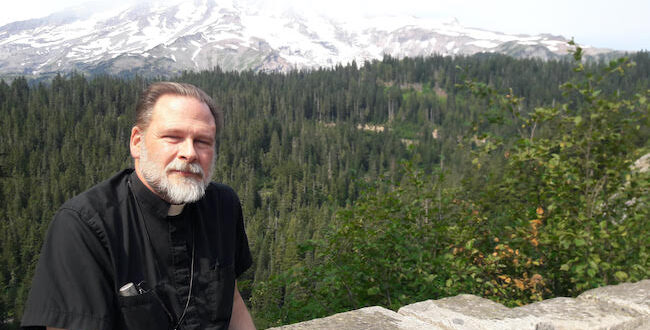 In 1988, alongside his wife Irene, Rev. Stephen Supica arrived at Holy Trinity Greek Orthodox Church, where they would find themselves for the next 32 years.

Sep. 1 marked Rev. Supica’s first official day of retirement. When the two originally arrived in Spokane from Sacramento, Holy Trinity was not the same place it is today.

None of them speak Greek sans Rev. Supica, who — when asked if he spoke Greek —confidently uttered what must have been several very fluent Greek sentences.

Not only have their services evolved from Greek to English, but Holy Trinity went from being one of the only Greek Orthodox churches in the Inland Northwest to one of several. Rev. Supica spoke about watching new churches pop-up in the area over the course of the last three decades, and how exciting it was to see the Greek Orthodox community grow over the years.

Throughout his 32 year tenure at Holy Trinity, Rev. Supica has become known for his dedication and commitment to pastoral care, especially for those on the margins.

“I think one of the great times in our church was when we had the refugees coming from Yugoslavia when it broke up” Irene Supica said.

The influx of refugees to Holy Trinity in the 90’s is a hallmark moment in Rev. Supica’s pastoral career.

“We helped resettle something like 20 families, working with world relief,” Rev. Supica said.

Irene Supica added that during this period, she really saw her husband living the theology of the church.

“I don’t mean to discount the theology of the church, but it has to be kind of lived out rather than just in a book,” she said.

“You might be married to an Orthodox priest if your idea of a date is a late night visit to the hospital together,” Irene Supica jokingly said.

His strongest suit, according to Irene Supica as well as Grafos is his ability to serve his community and to serve them well.

Grafos reflected on all of the work both Rev. Supica and Irene Supica have done over the course of her life– having been born into the church and grown up under their leadership.

“[I’m grateful for] the tireless time they’ve spent.. we hold an annual Greek Festival every year, it’s a financial fundraiser for our church, and just the dedication of both father and the time and the effort of both of them to make that successful, which really is just the heart and soul of our community,” Grafos said.

Greek Fest is another part of Rev. Supica’s legacy at Holy Trinity and in the inland northwest. This year would have been the 85th year of Greek Fest, a Greek dinner festival that attracts folks from as far as Missoula to come for a celebration of Greek culture that also serves as a fundraiser for Holy Trinity.

“One person tells us, a Greek guy in Missoula who has done a lot of research, maintains it’s the oldest continuously running Greek Festival in the country. I don’t know — that kind of amazes me if it’s true,” Rev. Supica said.

Regardless of the records that Greek Fest may or may not have set, it has been one of the most notable parts of Rev. Supica’s career.

“It’s a fun thing to do from the standpoint of, ya know, two or 3,000 people on the property over the space of three days… [its] good in terms of community building as well– ya know, you get to know someone a lot better after you’ve spent a week standing next to them making pastries than you’re likely to in the 20 minutes over coffee after church,” Rev. Supica said.

Both Rev. Supica and Irene Supica are looking forward to their future of being regular parishioners.

“We’re not gonna’ quit going to church, because we don’t go just because he was the priest. We go because we’re Orthodox Christians and that’s our parish,” Irene Supica said.

“My to-be-read pile, if I stacked them all in one heap, would be taller than I am… So I am going to be putting my feet up, which feels a lot better these days than being on them,” Rev. Supica said.

The two, along with Grafos, are very excited for what the future holds at Holy Trinity. All three parishioners spoke with the utmost excitement about Rev. Daniel Triant, the church’s new priest, who is joining them from the Seattle area.

Rev. Supica chuckled when he shared that he was excited to be present to help with Rev. Triant’s transition, because he wasn’t afforded the same privilege when he arrived in 1988.

“Father Triant will have someone to help him find the light switches,” he said.

Rev. Supica is embracing this new stage of life, filled with laughter and gratitude for the years he has spent leading this community. Irene Supica shared that she is very proud of him, particularly his skills to work with folks one-on-one to provide the care that they need.

“I think to me the stories are really their hard work.. and.. it’s their life, and they’ve really taken that to heart and it’s a wonderful service they’ve done for all of us,” Grafos said.