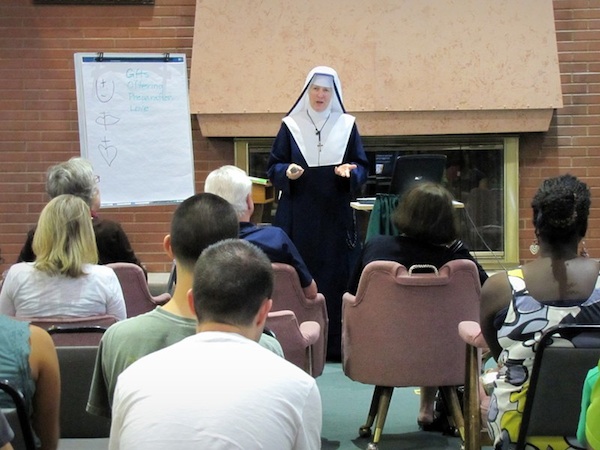 Retreat to focus on what happens at Mass

Overlooking the Moran Prairie is the Immaculate Heart Retreat Center, an enchanting facility that hosts a number of programs and retreats throughout the year. From March 1-3, Immaculate Heart will be hosting a retreat for men and women about Mass based on (and named after) the Rev. Jeremy Driscoll’s book “What Happens at Mass.” The retreat will detail the true nature and importance of Mass, both traditionally and theologically.

“Mass is about love,” says Driscoll, in the introduction to his book. “It is not an idea about love but the supreme encounter with love. A Christian is defined by this encounter.”

Not just the individual Christian however. As Driscoll later describes, the “reception of communion…is all those individuals being constituted as one body — only as one body! — united with the body’s head, Christ…we can see in the Church the sign, the image, of the holy Trinity; that is many who are one.”

Sister Mary Eucharista, one of the nuns participating in the event, said Mass is more symbolic than many people realize. The transubstantiation, for example, isn’t merely a turning of bread and wine into flesh and blood, but represents the unification of Christ with the body of the church congregation.

“We offer ourselves in the form of bread and wine. Jesus Christ, through the person of the priest takes that and then changes it into his body and blood,” she said.

In its event flyer, Immaculate Heart promises attendees, “The wonders of the Mass come alive at this retreat…The Mass is an encounter of love from God to us, and from us to God…We can go forth after each Mass spiritually rich with inexhaustible wealth to extend to all those we meet.”
Their promise, in fact, ties closely to Pope Benedict XVI’s recent clarification of the word ‘Mass:’  “In antiquity, missa simply meant 'dismissal'. In Christian usage, however, it gradually took on a deeper meaning. The word 'dismissal' has come to imply a 'mission'. These few words succinctly express the missionary nature of the Church.” Reminiscent of Matthew 5:14-16, but with a linguistic twist.