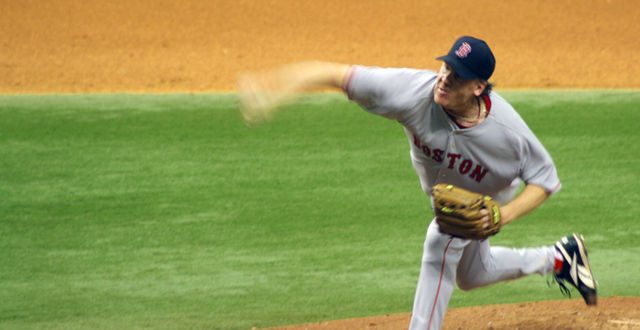 Curt Schilling on the mound/Wikipedia photo by Googie Man

In this ‘fun’ political season, I keep seeing people leverage “God-given” rights, personal liberties and other things that sound great on the surface for unwarranted personal gain.

One of the recent occurrences of a free speech “issue” in popular media to cause an uproar was the firing of Curt Schilling over controversial comments/posts on Facebook. There have been many people who would seemingly defend Schilling to the death — just do a search of #CurtSchilling on twitter if you don’t believe me. And there are others who hold that he finally got what he deserved because of his history of posting controversial comments on a variety of issues, ranging from his views on same-sex marriage, to Muslims, to, most recently, transgender people using the bathroom that corresponds with their gender identity. Subsequent to each of these actions, he has received warnings from ESPN.

These consequences certainly change person-to-person — especially when the person in question is in a position in which she/he has a spotlight or is working as a government official. For example, Kim Davis was county clerk prior to the legalization of same-sex marriage. Her position as a representative of the government is different than if she were in a private organization.

In various Scriptures, we see examples of freedom to act resulting in drastic consequences regularly. As was mentioned in a recent “Ask an Evangelical” column, while Moses converses with God on Mount Sinai, God’s chosen people construct and worship a golden calf. Thousands die as a result. The rich young ruler who inquired about following Jesus opted to stay in the life he knew because he had much and could not bear to part with his possessions, but this potentially deprived him of salvation. God gives us freedom of action, but that does not give us freedom from consequence.

Similarly, when the church chooses to act in particular ways, there are consequences. Whether positive or negative, the Church holds the attention of many. And, while the Church is not employed by any particular person or organization, it does represent a body of believers and, ultimately, the presence of God on Earth.

The ultimate question for us, then, is this: How will we act? Will we defend controversial speech and become the church associated with marginalizing others? Or will we act in such a way that our “consequences” positively impact our communities?

Certainly, there is room for respectful disagreement on a wide spectrum of issue — the church is made up of humans, not robots — but Curt Schilling’s rhetoric did not give himself or others the space for conversation (much less respectful disagreement) and, as a result, he represented ESPN and the church in a negative light. And if we, as the church, do not create a civil space for these important conversations, we bind ourselves to consequences, positive or negative.

Previous HUB Sports Center to host “Dads & Dudes Night”
Next Can pastors make a comeback after scandal? One Baptist tries