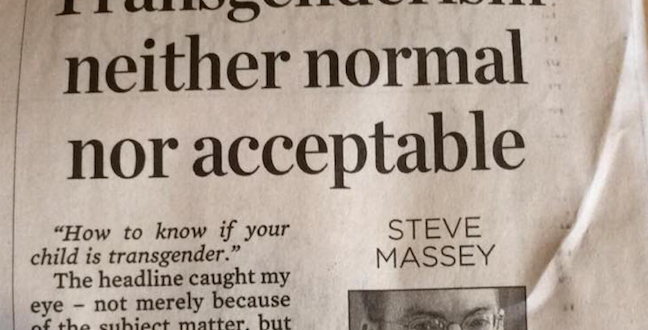 Photo of column that appeared in this weekend's Spokesman-Review

The Spokesman Review has a duty and obligation as the leading mainstream newspaper in our community to provide us with a fuller range of viewpoints on issues affecting each of us today.

In his recent column in the Spokesman-Review Steve Massey wrote about people who are transgender as though they are simply imaginative wayward children seeking to change reality to their will, instead of human beings with the right and dignity to decide how they want to live; deserving of respect of their freedom and choice. He ignores the very real duty and obligation of all faiths to acknowledge the harm done to people in religion’s name.

There have been thousands of years of this same cycle. Enough. Let us acknowledge the truth. Throughout history, all over the world, there have been many types of genders. It is a fluid concept – as is “reality” as we know from philosophy. Faith shouldn’t be taught without a basic understanding of philosophy.

Massey painted a colloquial, simplistic, view that reduces the questions of all human existence to convenient quotes making up a veneer of nicety via tradition. Tradition is also often known as “what is normal” and is used as a reference guide to make up rules of cultural reality about how some sort of people are the “right” sort of people, but others aren’t. Well, I don’t want to be the “right sort of people” if that’s the right sort of people. Like Huckleberry Finn, I’d rather go to hell. To paraphrase Shakespeare, be true to yourself then you can be false to no one.

We humans are so much more complex than any one book. No one written book or story can contain the rich, complex, lived experience or life and uniqueness of any one human being. There are truths that cannot be described by language which are not in written books, or religions. Life is so much more than that, and I am glad of this.

It is no small irony Massey mentions people who are transgender as seeking to bend reality to their own will when religions that are Bible-based, as well as many other religions and faiths, have sought to change “reality” and the world to fit their own will while rejecting scientific truths for thousands of years.

They’ve thrown fit after fit, and temper tantrum after tantrum, whenever their social or hierarchical ways of holding on to power were in danger from truths that spoke to and challenged their power structures. It is the longest lesson learned in the course of humanity when a religion has to give up the ghost and admit they are wrong. They fear that their whole way of life and authority over the discourse of what constitutes “truth” or “reality”, and thus their authority, will be called into question.

This authority should be called into question because it is the same authority that forcefully imposed its incorrect views of reality onto peoples of entire continents, refusing to recognize the order that already existed in many other cultures, which had many different genders.  This resulted eventually in horrific genocides and brought us to where we are right now, at this moment in history.

The writing is, therefore, on the wall.

Recognize that people can decide for themselves who they are. Those who must repent aren’t people who are transgender, but rather those who seek to do them harm. It is my personal faith and belief that each person is a book to be treasured that is wholly holy and unique unto themselves. I’m far more interested in the living books who are my friends and my community than even my most treasured book written by a person on paper or digitally.

Each person then is in charge of their own book in my estimation, yet, can glean knowledge and wisdom from the world around them and other human beings. I treasure books. I treasure people. I would like it if – instead of consulting the Bible as the authority – Steve Massey would consult the true authority on what it means to be transgender: people who are transgender themselves.

I am glad the editor of the Spokesman-Review wrote an apology. In the meantime, I am going to continue to appreciate each unique person I know. And I hope in the future when presenting such a topic, the Spokesman will have a better diversity of writers representing the voices needing to be heard so there is truly freedom of speech.