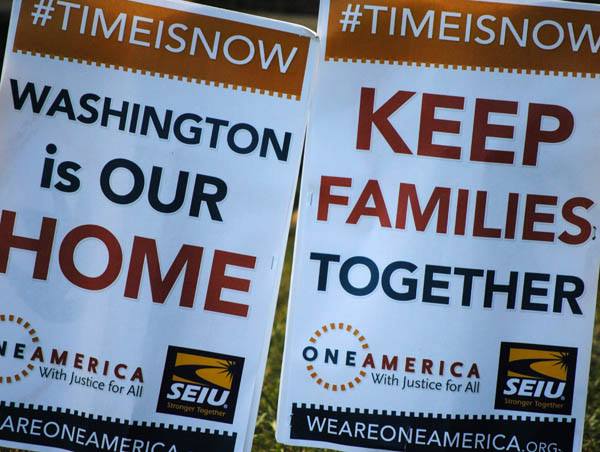 Local activists gathered at Riverside Park on Saturday to send one message to lawmakers — pass immigration reform laws that will keep families together.

David Brookbank, a social worker and human rights advocate, said many of those who have been deemed “illegals” by the U.S. government, should have been brought into the country as refugees, since they need protection from their homelands. Instead, he said, “they find themselves here, also without protection from the law, waiting for deportation and arrest.”

He said the Obama Administration is on track to deport a record 2 million people by 2014. Lawmakers — particularly republicans like Rep. Cathy McMorris Rogers — need to be pressured to get behind immigration reform, and fast, Brookbank said.

“Time is passing,” he said. “This is an ongoing tragedy.”

Matthew James attended the rally as a Service Employees International Union representative.  He said the immigration issue isn’t just a political one, but is a matter of faith.

He attends Spokane’s First Church of the Nazarene and said immigration reform is about equal opportunity.

“It’s not about us,” he said. “It’s about Christ. We’ve got to change our perspective, or we’re not going to change as a city. I love Spokane, but we’re behind. There’s a lot of bigotry here.”

The Rev. Todd Eklof of the Unitarian Universalist Church of Spokane said borders are imaginary. He said people of all colors need to unite as one family in an effort to reunite all families.

“Of course there are those, the greedy powers that be, the keepers of the status quo who wish to separate us from each other, just as they separate other families by pointing out their skin color, nationality, religious beliefs, economic backgrounds,” he said.

He said, however, that gathering together in peaceful opposition those efforts reminds lawmakers that they have the power to do good, to change current laws and to re-unite immigrant families who have been separated over the years.

Previous VIDEO: Rally for Immigration Reform
Next Is the military targeting conservative Christians in uniform over gay issues?