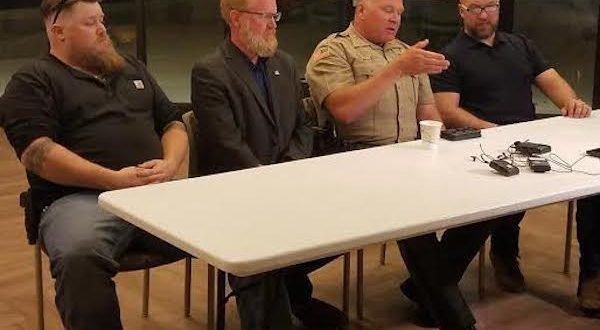 John Smith, former 7th district Washington state senator, spoke about his upbringing with those involved in white supremacy and the history of dominionism.

He began his presentation by discussing how he grew up with members of various white supremacist groups coming to his grandparents’ house, which included Randy Weaver, who was involved in the standoff at Ruby Ridge.

“What you will hear from a lot of people is that they will talk as if white supremacy or anti-semitism is like gluten, that just one day you can decide to give it up, but that’s not the case,” Smith said.  “The way that philosophy, that point of view works is it’s fundamental to who you are inside and so, while I made the choice as a teenager to walk away from it, I will be the first to admit that I have spent the majority of my adult life trying to overcome it; trying to wash that off.”

He remembered how one time, when he was about 14 years old, he went into his grandparents’ kitchen to make a sandwich when he saw, sitting around the kitchen table, members of the Christian Identity movement discussing a plan to take control of Northwest states (Idaho, Montana, Oregon, Wyoming) to make into their own country.  These members were his grandfather’s friends.

When Smith heard how they planned to hang Jews, African Americans, Mexicans and “Judeo-Christian pastors,” he said he argued with them before deciding it was time for him to leave.

Smith explained how people were driven to adopt the violent rhetoric through Genesis 1:26, which he said has been called the dominion mandate by those involved with Christian Identity.  However, he described the verse was actually about people having a responsibility to care for and steward the Earth rather than about a group of people getting to rule over another.

Today, Smith said dominionism looks like a place where the dominionist is the hero and everyone else is the villain.  He added that dominionists welcome everyone and seek out allies from other races, community and faith leaders, among others, as long as they submitted to their beliefs.

Smith discussed other groups and individuals involved with white supremacy including the Remnant Resolves, pastor Peter J. Peters, Marble Community Fellowship and its founder Barry Byrd, The Order, pastor John Weaver and others.

Using a quote from Martin Luther King, Smith said, at the end of his presentation, that hate cannot cast out hate and that people should talk to one another instead of at one another, stop “painting every Republican with the racist brush” and speak up if they see activity and behavior that leans toward white supremacy or dominionism, among other points.

“Real love, genuine Christ-centered love, confronts self-destructive behavior and I am here to tell you that if you embrace dominionism, white supremacy or Christian Identity,” Smith said. “That theology, that ideology is more destructive to you, more dangerous to your family than to anybody else, including the folks in this room with darker skin, because you can’t embrace hate without having it rot you from the inside out.”

Jay Pounder, the whistleblower who leaked private messages involving state Rep. Matt Shea, spoke about how he became associated with dominionism, what led him to change his ways and how faith and the Gospel have been weaponized.

During his presentation, Pounder explained how fear is used as a primary motivator for the dominionists to keep their agenda moving forward.

“The more they keep you afraid, they more you want to keep pursuing things,” he said.

He provided a definition of dominionism, explained his personal involvement with dominionism and gave an apology for being a part of it and wanted to help make up for it by bringing awareness and educating people on it.

Pounder said he began to change in 2016 at the center when he saw people’s reaction to President Donald Trump’s election as being an attitude that did not care for others and was against leftists and globalists.

He added that the weaponization of the Christian Gospel he saw impacted him as well and pushed him to move away from dominionism.

“I thought I was part of something that was gonna eventually help the community, that we were gonna be there and be prepared that when something collapsed and fell apart we were gonna pick up the pieces,” he said. “But I didn’t realize that dominionism was part of that.”

Pounder explained how the Gospel was weaponized through the abuse of scripture, which includes Genesis 1:26 and 2 Corinthians 3:17-18 “Where the Spirit of the Lord is, there is liberty.”  With the passage from Corinthians, Pounder explained how through context, its about spiritual freedom rather than earthly freedom.  He added that use the Bible to drive earthly power and an earthly driven kingdom instead of a heavenly kingdom.

“[Dominionists] want an earthly kingdom, whereas, in Christianty, we need to focus on the next kingdom; the heavenly kingdom,” Pounder said.

The danger to the community, he said, is that a weaponized Bible creates a weaponized church and faith where it creates unproductive dialog, disrespect, leads to wrong perceptions of who Christians actually are and division between people and communities and “destroys opportunities for a better Spokane.”

He ended his presentation by saying he does not hate Shea, wants to build bridges between groups in Spokane like never before and telling people they can take action by not voting for people who represent dominionist values, meet people who are different and hear their stories and people do not have to morally agree to have common respect for each other.

“We need to listen, we need to close our mouths and listen,” Pounder said. “We may not always agree but if we do this we’re able to get to know each other better, speak truth into each other’s lives and have conversations that maybe, just maybe, we can come back together as a community.”

Knezovich gave his presentation last where he spoke about how the country faces threats from radical groups on both the left and right.  These groups included the New Black Panthers, ANTIFA, ISIS, alt-right, white supremacists and others.

Knezovich explained what tactics radical groups from both the left and right use to destroy a nation.  These include harping on controversial matters of no importance to divide people; destroy the people’s faith in natural leaders through contempt, ridicule and obloquy; and always preach democracy, but be prepared to seize power and do so violently, among others.

He provided his own experiences of groups trying to discredit him by accusing him of comparing constitutionalists and Christians to ISIS and other actions.

During his presentation, he described how radicalization is created on both the left and right through tactics that involve fear, anger, hate and falsehoods.

Knezovich described how hate was being spread by both the left and right when it came to police officers, citing the 2016 shooting of Dallas police officers and saying how they died because of radicalized hate.  Also, he added how Russia influenced and interfered in U.S. elections by feeding hate and anger to both the left and right on social media.

Throughout his presentation, he talked about other groups involved with white supremacy including Marble Community Fellowship, Team Rugged, Northwest Territorial Imperative, The Order and others, to describe how white supremacy is real in the area and has been around for a long time, among other subjects involving extremist groups in the country.