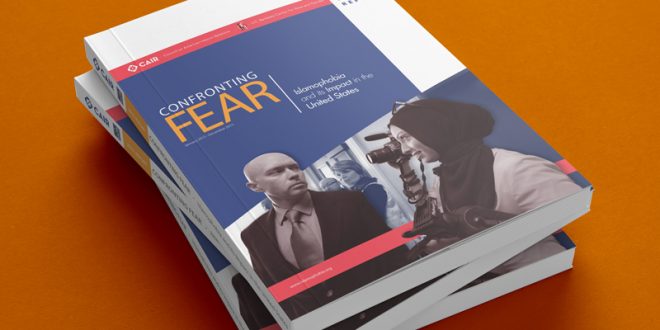 Copies of Confronting fear, a report examining Islamophobia and its impact in the U.S. Photo courtesy of CAIR

(RNS) A Muslim civil rights organization says that a record number of groups are spreading hatred of Muslims and have raised more than $200 million in funding since 2008.

The Council on American-Islamic Relations, a Muslim advocacy group, issued its findings in a report conducted with the Center for Race and Gender at the University of California, Berkeley, released Monday (June 20).

The report, titled “Confronting Fear: Islamophobia and its Impact in the United States,” lists 74 organizations that its authors consider Muslim-oriented hatemongers and their supporters, a list that has grown by five since the last report in 2013.

“Islamophobia, or anti-Muslim propaganda, has unfortunately moved from the fringes of American society to the mainstream,” said Nihad Awad, CAIR’s executive director. He cited Donald Trump’s proposed ban on Muslims entering the U.S. and Sen. Ted Cruz’s suggestion that “Muslim neighborhoods” be monitored as outgrowths of that propaganda.

“It reminds me of what happened to the Jews in Europe and Germany,” he said.

Slated for release last week, the report was delayed in the wake of the Orlando, Fla., shooting rampage on June 12.

The report describes an “inner core” of 33 U.S.-based organizations that CAIR believes are Islamophobic, defined as actively “contriving” and promoting hate and fear of Muslims and Islam. Among the groups named are the David Horowitz Freedom Center, Jihad Watch, PamelaGeller.com and the Forum for Middle East Understanding.

A second “outer core” of 41 organizations and influential individuals is described as supporting the inner core through “work (that) regularly demonstrates or supports Islamophobic themes.”

This list includes The Washington Times, Fox News, HBO’s “Real Time with Bill Maher,” Rush Limbaugh and the Joyce and Donald Rumsfeld Foundation, among others.

Together, the 74 groups comprise what CAIR calls “the U.S. Islamophobia network.”

CAIR noted both in the study and in the announcement of its release that it is not opposed to criticism of Islam and Muslims.

“We believe in strong conversation in this country,” Corey Saylor, the report’s main author, said. “But we want to see those who push Islamophobia on the fringes of society and not in the mainstream.”

But David Horowitz, whose autonomous organization made the list for the second time, defended his work combating extremism as fair and free speech.

“You cannot find one sentence I have ever uttered that can be called anti-Muslim,” he said. “I have said countless times that most Muslims are law-abiding people who want to keep their children out of trouble. However, there is a large segment that wants Holy War.”

Horowitz described CAIR as “a front for Hamas,” the Palestinian militant group, and “a creation of the Muslim Brotherhood.”

Usama Dakdok, founder of  the Straight Way of Grace Ministry, is a new addition to CAIR’s list. Addressing himself to Americans, he said, “You are destroying yourself because of your ignorance of Islam.”

Previous The Place of Visual Arts in Interfaith Bridge Building
Next Ask a Jew: Do Jews mix socially with other religions?