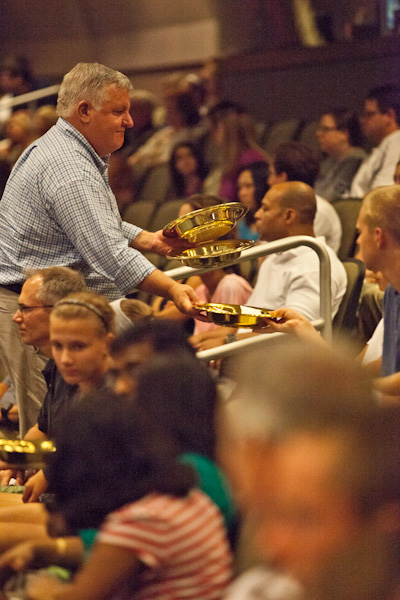 WASHINGTON (RNS) Collection plates are growing even lighter as Protestant church member giving reached new lows in 2011, and tithing probably will not recover from the recession, according to a new report by Empty Tomb, a Christian research group.

The percentage of a church member’s income given to the church dropped to 2.3 percent in 2011 (the latest year for which numbers are available), down from 2.4 percent in 2010, according to the Empty Tomb study.

In 1968, church members gave an average of 3.1 percent of their income.

Giving has declined for four consecutive years, according to the report. The only other period of prolonged decline in giving per member was from 1928 through 1934, almost entirely during the Great Depression.

The steepest monetary decline was in the area of “benevolences,” spending that does not apply to a local congregation’s needs but includes things like seminary support or missions work. Giving to benevolences was at 0.34 percent of a person’s income, a decrease of 48 percent since 1968 — its lowest level since that time period.

Altogether, the report found, churches had $87.2 million less to spend in 2011 on work beyond their congregations than in 2010.

Empty Tomb examined data reported by congregations to their denominations and then compiled in the “Yearbook of American and Canadian Churches.”  In some cases, Empty Tomb obtained data directly from denominations.

The decline could be attributed to a variety of reasons, including economic struggles, said Matt Branaugh, director of editorial and business development for the Church Law & Tax Group at Christianity Today. Christianity Today has conducted its own surveys on church tithing.

Another reason could be a decline in church member attendance, Branaugh said.

“I’ve heard some reference that phenomena as the ‘grazer effect’ — people are not going to church every week now, and the weeks they don’t go they’re listening to podcasts, doing worship on their own or fellowshipping with people in other ways,” Branaugh said. “They’re not there as much, and consequently they’re not giving as much.”

Other churches struggle with how to talk about finances, not realizing that churches must teach about how a relationship with God involves giving — “stewardship,” as churches would say, Branaugh said.

“As a result, if it’s not being talked about and it’s not really being taught, it may not necessarily grow into the culture of that congregation,” Branaugh said.

Churches need to embrace the idea that all money is God’s, not just a small tithe, said Rick Dunham, CEO of Dunham+Company, a consulting firm that assists ministries in fundraising. Dunham is also on the executive committee of the Giving Institute, an organization that seeks to advance philanthropy.

“I think the decline in giving is in part because the church hasn’t really embraced the biblical mandate around true giving, the idea of investment in eternity, in the stuff that matters most,” Dunham said. “Not just putting a little bit of money in the offering plate and thinking I’ve done my duty.”

Ronsvalle said part of the reason giving has declined is because churches still treat people as if they are living in “hard times” — even when they are not.

“They’re hard because people want to take better vacations,” Ronsvalle said. “They want to get more cars. They want to have more square footage.”

Churches and their members need to realize that if 100 million Christians gave an extra $50 a year, child deaths could be drastically reduced across the world, Ronsvalle said.

“The church doesn’t think that way,” Ronsvalle said. “It has not understood its potential power for good.”

Katherine Burgess has lived in California, Cambodia and Tennessee. She has covered subjects as varied as a United Nations tribunal, church leadership conferences and a maximum security prison. She is currently based in Washington, D.C.

Previous Putting church in action
Next BRIEF: Gonzaga professor receives grant from the National Endowment for the Humanities