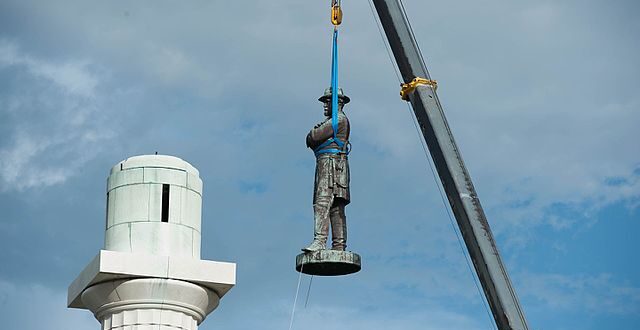 The Confederate Monument to Robert E. Lee is removed from its pedestal on May 17, 2017 Wikipedia photo by Abdazizar

I grew up in San Antonio, at the crossroads between the American South and Southwest. In my school district was a high school named after Robert E. Lee, general of the Confederate States Army. I ran against their track and cross-country teams and played soccer against the “Lady Vols,” as they were known, for four years. Growing up in Texas, it didn’t strike my teenage self as odd, let alone wrong, to name a school after someone who fought against the United States Army. Years of studying southern history and religion prompts me to look back with a different view. To my teenage self, “Bless your heart, and go read some history other than your high school textbook.”

My first book explored a group of Afro-Creole men in post-Civil War New Orleans who spoke with the spirits of the dead. From the great beyond, a religio-political pantheon, including Abraham Lincoln, Voltaire, George Washington, Saint Vincent de Paul, John Brown, Jesus, and more, advised this small group of men on how to best re-build and re-make the U.S. after the pain and destruction of slavery and a civil war. The spirits of some men who fought for the Confederacy also appeared to in their séance records. They apologized for and lamented their participation in the war. They were not to be honored but rather required spiritual penance. For example, when the spirit of Robert E. Lee appeared at the séance table, he expressed regret for his role in the recent war and told those listening to not dwell in “the illusion of the Past” but rather recognized the rights “of everybody.” When the city removed the statue to Lee in in New Orleans’s Tivoli Circle in 2017, his spirit’s instruction to not dwell in that historical illusion was finally fulfilled.

In 1877 Reconstruction came to an incomplete stop in the South and former Confederates and Neo-Confederates took back political power. The myth of the “Lost Cause,” which inaccurately insisted that the South fought to preserve liberty and self-governance as opposed to slavery, proliferated throughout the region. This version of civil religion appeased Southerners’ spiritual need to reaffirm their identity and create a version of history that excused them of their sins. As the Lost Cause entrenched itself in southern culture, communities built physical monuments to their new history. It was also visible on the silver screen in the 1915 film “Birth of a Nation,” which tells a fictionalized epic of two families during the Civil War and Reconstruction periods with a double wedding and celebratory Ku Klux Klan parade at the end.

Many of these statues to Confederate figures were built at significant moments in American history: the 1896 Supreme Court ruling of Plessy v. Ferguson, which approved racial segregation, the resurgence of the Ku Klux Klan in the 1910s, and after federal rulings that began to desegregate public spaces. Some of the most recent monuments and memorials are less than 15 years old. For decades, citizens, activists, and historians have argued for the removal of these memorials and monuments and to rename those schools and parks named after Confederate leaders. City and state leaders began to listen more attentively after a white supremacist murdered nine Black men and women in a historic Charleston church, and the debate became violent in late summer 2017 when white nationalists descended on Charlottesville, Virginia to rally around a Lee statue. One of them killed a counter-protestor. This summer, during a wellspring of activism and protests in support of Black Lives Matter, we are seeing something of a tipping point as statues, paintings, and memorials are being removed, through formal means or by groups of protestors. While some politicians and pundits worry and fret that these are attempts to erase history, their concerns obscure the real work being done in removal. Taking down statues will not prompt us to forget or erase history. Statues are not the carriers of history. Instead, they represent what we choose to memorialize. As historian Ana Lucia Araujo recently argued, Confederate monuments preserve racism, not history. If you want to dismantle white supremacy, removing celebrated symbols of its power and the South’s fight to preserve slavery is a good initial step.

Those who defend Confederate monuments, the Confederate flag, and the honoring of Confederate leaders often spin the conversation to be one of “heritage” and good men who did what they felt was right. While this might sound honorable at first, remember that what they thought was right, preserving racialized slavery, is abhorrent. Vice President of the Confederate States of America, Alexander Stephens delivered his famous “Cornerstone” Speech just a few weeks before the attack on Fort Sumter. In it, he explained that the cornerstone on which the Confederate government resided was, “the great truth that the negro is not equal to the white man; that slavery subordination to the superior race is his natural and normal condition.” He celebrated that this, their “new government,” was “the first, in the history of the world, based upon this great physical, philosophical, and moral truth.” The Confederate cause was treason to the United States and all our nation proclaims—equality, liberty, and the common good. In the wake of the recent Fourth of July weekend, our national identity and the presumed sacredness of our ideals are on the minds of many. It’s an instructive time to reflect on what it means to recognize all of us as equals and what it will take to form a more perfect union.

Emily Suzanne Clark, Ph.D., is associate professor of Religious Studies at Gonzaga University, where she teaches and researches American Religions. She is the author of the multi-award-winning book, A Luminous Brotherhood: Afro-Creole Spiritualism in Nineteenth-Century New Orleans and co-editor of Race and New Religious Movements in the USA: A Documentary Reader.

When not teaching, reading, or researching, she can be found hiking and running about the area and playing soccer in the local Spokane adult leagues.